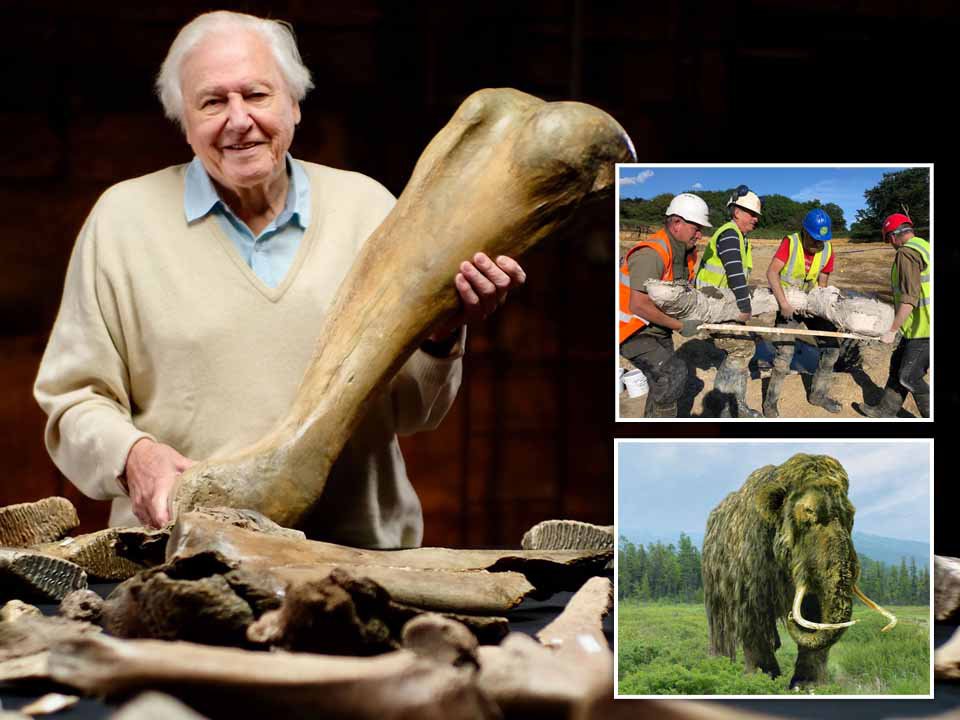 Five ice-age mammoths in an extraordinary state of preservation have been discovered in the Cotswolds, to the astonishment of archaeologists and palaeontologists.

The extensive remains of two adults, two juveniles and an infant that roamed 200,000 years ago were unearthed near Swindon, along with tools used by Neanderthals, who are likely to have hunted these 10-tonne beasts.

Also found at the site were other ice-age giants, such as elks, twice the size of their descendants today, with antlers 10 feet across. Tiny creatures like dung beetles, freshwater snails and even seeds, pollen and plant fossils, including extinct varieties, have also been preserved at this site.

The researchers believe that the mammoth remains and the artefacts are from a time when Britain was still occupied by Neanderthals during a warmer interglacial period known as MIS7.

Falling temperatures had forced Neanderthals south to this site that was then a lush, fertile plain to which both animals and humans were drawn.

Researchers hope these findings will offer new clues into how our Neanderthal ancestors lived in the harsh conditions of ice-age Britain.

The discoveries will be explored in a BBC One documentary, Attenborough and the Mammoth Graveyard, to be aired tomorrow on December 30, in which Sir David Attenborough and evolutionary biologist Professor Ben Garrod will join archaeologists from DigVentures to film the excavation.

‘This is one of the most important discoveries in British palaeontology,’ Garrod told the Observer.

Such complete skeletons are ‘incredibly rare’ as these mammoths were found lying in the ground exactly where they died a quarter of a million years ago.

‘We have evidence of what the landscape was like. We know what plants were growing there. The little things are really revealing the context of these big, iconic giants. It’s a glimpse back in time. That’s incredibly important in terms of us understanding how climate change especially impacts environments, ecosystems and species,’ he added

‘Exciting doesn’t cover it. Other mammoths have been found in the UK but not in this state of preservation. They’re in near-pristine condition. You can’t take it in,’ said Lisa Westcott Wilkins of DigVentures, an archaeology social enterprise.

‘Archaeological sites from this period are rare, and critical for understanding Neanderthal behaviour across Britain and Europe. Why did so many mammoths die here? Could Neanderthals have killed them? What can they tell us about life in ice-age Britain? The range of evidence at this site gives us a unique chance to address these questions,’ she said.

The species weighed up to 15 tonnes, twice or three times the weight of an African elephant, making it the largest species of mammoth ever. The circumstances of so many mammoths dying at one site is still a mystery to scientists.

Amateur fossil hunters, Sally and Neville Hollingworth discovered the graveyard and Neanderthal tools. Soon after, DigVentures organized two field seasons in 2019 and 2020 to excavate the site.

‘Attenborough and the Mammoth Graveyard’ airs at 8 p.m. GMT on December 30 on BBC One.