It’s been about 14 years since the launch of the original Kindle, and in that time e-books have become an incredibly popular way to read. But very few challengers have emerged with decent competitors to Amazon’s huge library and solid devices.

Kobo, a Canadian firm now owned by Japanese ecommerce giant Rakuten, has a history almost as long and is popular with e-book fans that don’t want to be tied to Amazon’s ecosystem. And with its latest devices launched last month, Kobo is finally producing Kindle rivals that can stand on their own even without that qualification. With great hardware, a comprehensive store and a few tricks that Amazon doesn’t match, the new Kobos are worth considering alongside Kindles for anyone looking to get into e-books. 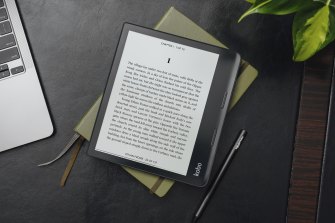 The Kobo Sage has a bigger screen than any Kindle, is comfortable to hold, works with e-books you get from other stores or the local library, plays audiobooks and can become a notepad with the sold-separately stylus.

Until now, the main reason for getting a Kobo was the more open ecoystem, and that remains a big selling point. Kindle has the power of Amazon behind it, meaning it may tie into subscriptions and benefits you already have. It also means more frequent sales, and connectivity with Goodreads. But Kindles are locked to the Amazon store, making it tough to get books from anywhere else.

On the Kobo side, the built-in store is just as full-featured, but you have additional options too. If your local library (or any library you can sign up to) offers e-books via Overdrive, you can take out loans and place holds directly from a Kobo e-reader, which is a great source of free reads. You can also plug a Kobo into a PC (or use Dropbox) to transfer over e-books in any format, including rights-protected files using Adobe Digital Editions, which means books you buy from Google, Booktopia or virtually anywhere work great alongside Kobo’s own ePubs.

Kobo has recently launched subscriptions to match Amazon on that front too, although they’re obviously not quite as mature. The $14-per-month Kobo Plus, for example, includes hundreds of thousands of books, but nowhere near as many big names as the similarly priced Kindle Unlimited. Kobo Audiobooks gives you one audiobook per month for $13, and you can listen to them directly from your e-reader using Bluetooth headphones. Amazon’s slightly more expensive Audible offering again has a better range, but for whatever reason Australian Kindles can’t play audiobooks like the US models can.

Then there are the devices themselves. On the low end, both companies make entry-level e-readers at around the $140 mark — the Kindle and the Kobo Nia — which are extremely similar and both offer the basics; a six-inch relatively low-resolution screen, basic adjustable light and 8GB of storage. But the comparisons get more interesting with the fancier e-readers.

In years past, I would have said Kobos don’t look or feel as nice as Kindles, but that’s no longer the case. Looking at the new Kobo Libra 2 and Kobo Sage, which are rivals to the latest Kindle Paperwhite and Kindle Oasis, respectively, there’s no obvious less-good option.

All these devices have very sharp screens at 300 pixels per inch, waterproofing, great lights for reading in the dark and blue light filters that can increase as you get closer to bedtime. The Kindle Oasis has an ambient light sensor to adjust the brightness automatically, and a cool metal build which is unique, but the Kobos have larger screens.

I really like the asymmetrical design of the Kobos, where one edge is chunkier and has buttons for easy one-handed page turning (with either hand). It’s grippier than the Kindle Oasis, and makes the symmetrical shape of the Kindle Paperwhite feel awkward.

And while Amazon’s official Kindle covers are great, Kobo’s accessories are much more interesting. The covers wake the device and put it back to sleep automatically, like the Kindle’s, but they also fold magnetically and prop the Kobo up for hands-free reading. For the Sage specifically you can get a cover with an additional built-in-battery, and also a stylus that lets you mark up and annotate your books, or keep a notepad and convert your scribbles to editable text. 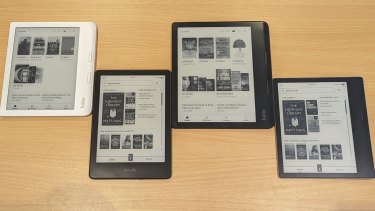 When it comes to price, things are relatively even across the devices, but Amazon has the advantage of being able to offer more versions of each. For devices with 32GB of storage, the Kobo Libra 2 is $280 while the Kindle Paperwhite is $290. The Kobo Sage is $440 while the Kindle Oasis is $450. But Amazon also offers 8GB versions of both the Paperwhite and Oasis, for $240 and $400 respectively.

The competition for e-readers is heating up, but it’s to everyone’s benefit. As it currently stands, all four devices are excellent for reading books on, last ages between charges and have exhaustive built-in stores.

But while the Kindle ties in with your existing Amazon dealings and offers some less-expensive e-reader options, the Kobos are comfier to hold and give you more freedom in where you get your books and what you do with your device.