Attorney-General Michaelia Cash has urged federal Labor to support the government’s proposed anti-trolling laws in a clear signal the government wants to make its crackdown on tech giants a political issue before the next election.

In an exclusive interview with The Sydney Morning Herald and The Age, Senator Cash said there were rising concerns in the electorate about the use of anonymous accounts on social media platforms to trash people’s reputations.

“This is a very simple bill that says we’ve had enough with online trolling,” Senator Cash said. “If Anthony Albanese and Labor cannot support that then quite frankly, they are failing Australians.” 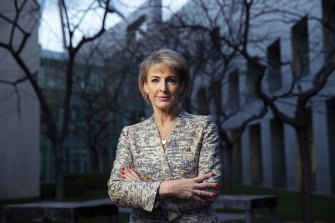 The government last month unveiled a crackdown on anonymous trolling online. Under the planned new laws, social media platforms will be forced to have a complaint scheme that will let users request anonymous trolls' identities or risk being liable for defamation payouts. The government has said it would be willing to fund test cases against social media platforms to ensure the proposal worked.

Figures from the eSafety Commissioner, which is responsible for dealing with adult cyber abuse such as harassment and menacing, show 30 per cent of informal complaints in the last year were about defamatory content that the commissioner is unlikely to be able to address.

“This isn’t a new problem,” Mr Dreyfus said, adding the government had waited eight years in power to make an announcement. “At this stage there is still not even a bill before the election, just an exposure draft which is effectively a ‘user identification’ bill for the purposes of defamation law rather than an anti-trolling bill”.

Legal experts, including judges, have argued the proposal would duplicate the function of existing court orders and risked flooding the courts with litigants.

But Senator Cash countered that the laws’ primary purpose was to have trolling comments removed without the courts intervening, with a single defamation case typically costing hundreds of thousands of dollars in legal fees.

“If this can be resolved outside of a court, that is actually a good thing,” Senator Cash said. “And the bill is being deliberately structured to encourage that.”

Social media companies can only avoid liability for defamatory posts if they provide the real name and contact information for anyone allegedly behind the account. This will also require the user’s consent.

If a user is unwilling to take down their comment or turn over their identity, the aggrieved person can seek a court order against the social media giant to disclose their name and details.

A complainant can also go directly to court and seek the order. Senator Cash said in that case it “would be a decision for the platform” to tell a user that someone had sought their identity.

That could cause problems where someone is seeking a person’s identity for a malicious purpose, such as to intimidate a former domestic partner or a business rival.

The law attempts to address that by allowing the court to refuse to make an order where it may risk someone’s safety, a term Senator Cash said was deliberately broad to “encompass so much more than a physical threat.”

However, it is unclear how that risk could be established if the person who is the subject of the order is unaware it is being sought.

“This is very much why you do put things out for comment, so you can look at the feedback and in the event that, based on the feedback, you do believe that changes or tweaks to proposed legislation should be made, you can actually look at making them,” Senator Cash said.

The court may also have the ability to inform the user their identity is being sought, in a similar way to existing processes.

Tech giants Facebook and Alphabet, which owns search engine Google and YouTube, reacted furiously to the federal government’s last social media reforms which forced them to pay for news content.

Neither company has declared a view on the new laws, which are up for public comment until late January.