By lunchtime on 12 July this year, flash floods had caused eight underground lines to be suspended and many stations forced to close.

In the aftermath of flooded basements and shop floors, Londoners quickly took to social media to share shocking images of water gushing down tube steps, sentimental contents ruined, and cars determinedly ploughing through sodden high streets as they battle against water levels that licked the tops of their tyres.

Five days later it happened again. In under two hours over 70cm of rain had hit the streets of London. Once more, homes, restaurants, shops and stations were flooded.

Then once more, on 25 July, the capital felt the effects of another sudden, violent downpour.

Following this flood, as well as the now usual flurry of tube stations quickly shutting gates to passengers, two London hospitals had to close too, with patients forced to evacuate their beds and the building due to power outages.

The Met Office also issued its first extreme heat warning in July as temperatures soared to 32⁰C in large parts of England and Wales.

As homeowners and businesses struggled to deal with the devastation caused yet again, the events were a stark reminder of projections from the non-profit news organisation Climate Central that parts of London were at risk of being underwater by 2050. Just 29 years away.

But how realistic is this claim?

According to Climate Central’s interactive coastal risk screening tool, it’s predicted that many areas of London, including Merton, Kensington and Chelsea, will be seriously affected by flooding.

‘The sea level rise and coastal flood risks illustrated in our maps are based on current peer-reviewed research, including the latest IPCC projections published earlier this year, and the most accurate global coastal elevation dataset available,’ explains Peter Girard from the organisation. ‘Our tools visualise the best available science on the risks posed by rising seas and identify at-risk areas.

‘Assessing those more precisely with available technology, governments can plan responses that minimise the danger and disruption caused by increasing coastal floods.’

Meanwhile, A study carried out by the mayor of London and Bloomberg, has also predicted that six boroughs, including Hackney, Hammersmith & Fulham and Tower Hamlets, are at ‘high risk’ from the climate impacts of flooding and high temperatures.

With public transport already being affected, data from the Environment Agency predicts that 10 per cent of main roads and over a fifth of railways across the UK are at high risk of flooding if water levels continue to rise.

Further data shows that the Thames rose by 15 centimetres between 1911 and 2008 and that this rise is accelerating. With this growth in mind, almost half of all hospitals and 20 per cent of schools across London could potentially be at risk, too.

So what does this spell for communities in key areas, or for London’s historical buildings – and their residents – such as Buckingham Palace and The Houses of Parliament? How will the city survive? And is there some secret relocation plan in place that we don’t know about?

In short, are all Londoners doomed to drown or is something actually being done to tackle it?

According to Sarah Smith, the Environment Agency’s Flood Risk Manager for London, the answer is quite clear: no, we’re definitely not doomed – and yes, something is being done about it.

However, before you take a huge sigh of relief, it certainly doesn’t mean we can just sit back and relax.

As we saw this summer, flash floods are on the increase due to climate change, which means homeowners still need to be proactive in protecting their houses. For those who live directly on the river, there is also still an element of risk – not from flooding, but from the potential impact of defences have to be built up or back as part of plans to protect London from watery disaster. 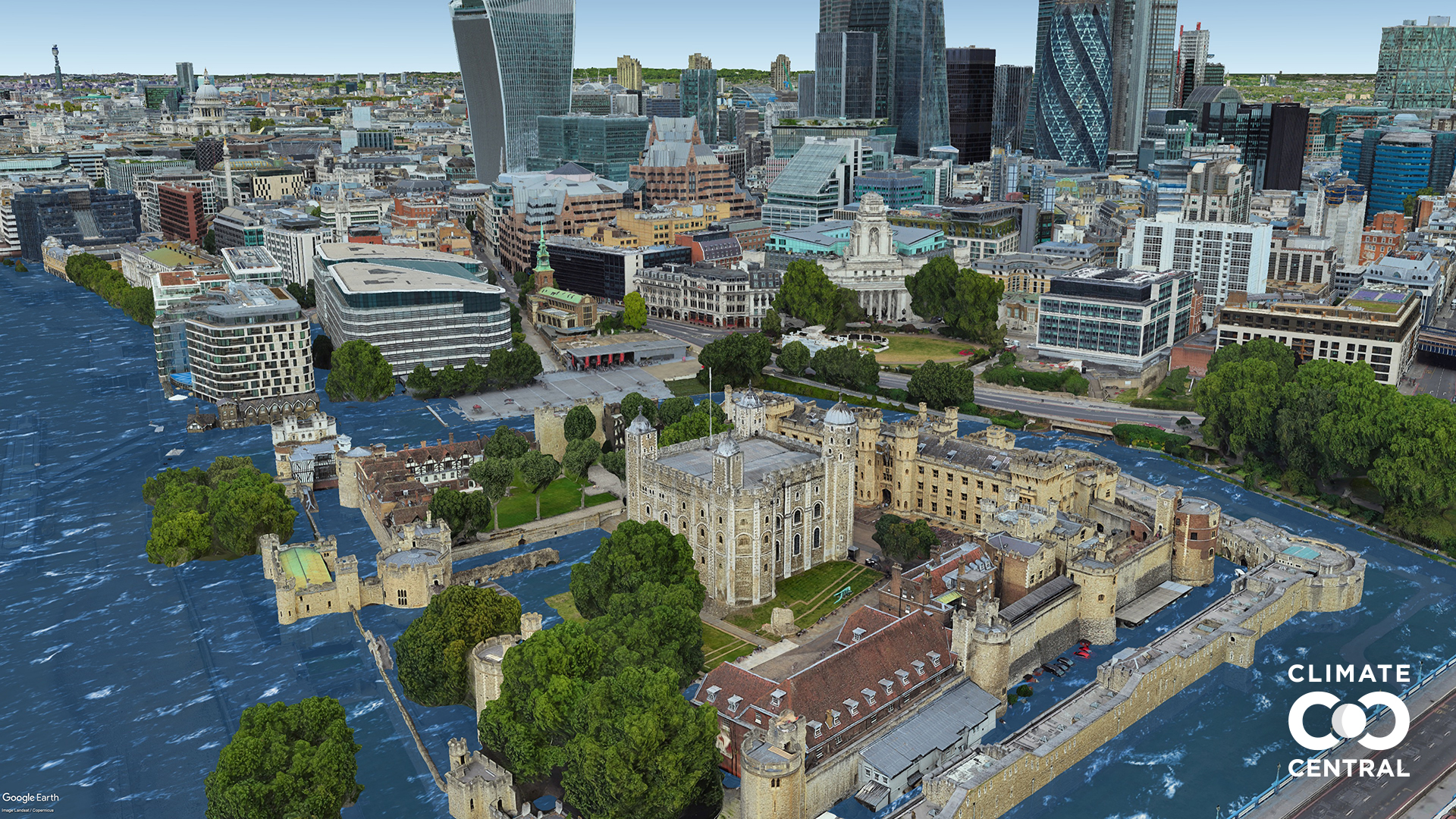 Clearing up the mixed messages surrounding claims that ‘London will be underwater by 2050’, Sarah tells Metro.co.uk: ‘The Climate Central predictions are really helpful to prompt a discussion around potential impact of sea level rise and the need to adapt to climate change.

‘But what they don’t take into account is the network of tidal flood defences that we have in London, that provide a very high standard of protection to London and the Thames Estuary.’

Peter Girard adds that plans that may have been put in place by the government to tackle flooding, suggests they have taken Climate Central’s ongoing research seriously.

‘As seas continue to rise, increasing the risks of coastal floods, governments will face bigger challenges to protect coastal communities,’ he explains. ‘But defences like those that help to manage coastal flood risks in London serve as examples of how governments can respond to protect people, property, and economic centres in low-lying areas.

‘By using tools like Climate Central’s to identify at-risk areas and assessing those risks more precisely with available technology, governments can plan responses that minimise the danger and disruption caused by increasing coastal floods.’

WHY IS LONDON AT RISK OF FLOODING?

There are two key factors to consider – rising sea levels and surface water flooding, both casualties of global warming.

In August, a report from the Intergovernmental Panel on Climate Change (IPCC) found that in all predicted scenarios, the average global temperature was likely to exceed 1.5⁰C.

A warming of the ocean and increased melting of land-based ice, such as glaciers and ice sheets, is behind rising sea levels, which then have a knock on effect on our rivers, such as the Thames which runs through the capital. 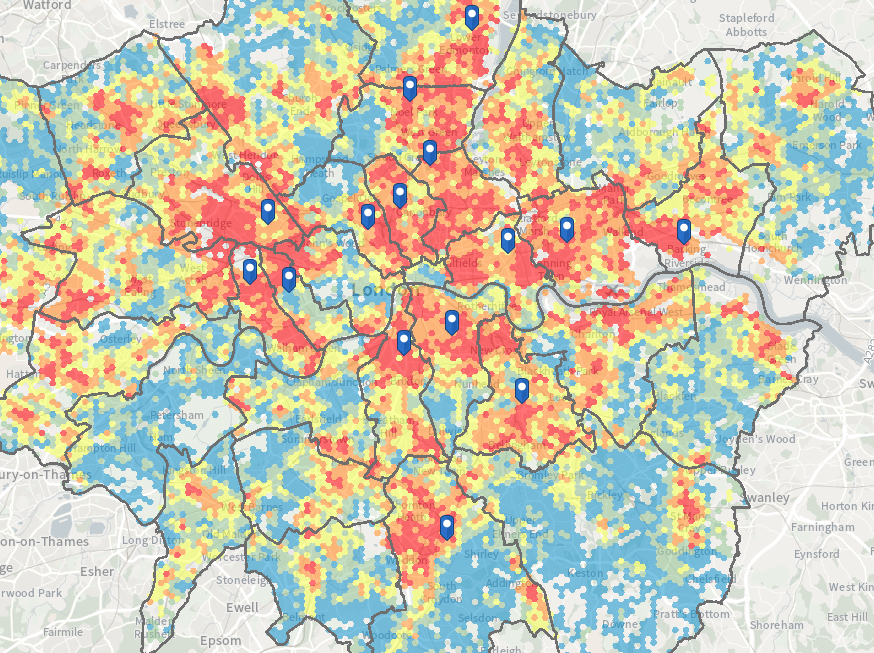 Meanwhile, a warmer atmosphere is also creating more moisture, resulting in flash floods – which are measured as 30mm of rain per hour – and seen as a surface water issue, which means a lack of adequate drainage is causing rain to collect rather than filter away.

Until we begin to reduce the climate temperature, quick and sudden floods will only become more intense. In fact, according to the Climate Resilience Programme, research has suggested that these types of rainfall will increase five fold by the 2080s if climate change continues in the way it has.

‘We will see increased risk of high intensity rainfall as the climate changes,’ admits Sarah. ‘So we are likely to see increased surface water flooding, and that doesn’t mean the whole of London, it could be very small pockets. That’s why adaptation and limiting the temperature rise – so it stays below 1.5⁰C – is really going to be key.’

Additionally, the way London is built – and still being built upon – is also an issue.

‘The density of buildings is the first of the problems,’ explains Julia Starzyk, founder construction consultancy, Star Projects . ’If you think about buildings as rectangles on the map, these areas do not allow water to soak into the ground freely. We have roads, pavements, patios and other structures only adding to this effect.’

Problem number two, she adds, is the fact that we are building in general and increasing the amount of waste water – but not really developing the drainage system to take this into account.

‘I think that given the age of London’s drainage is reaching 200 years soon it’s probably the time to look into upgrading the infrastructure as much as possible taking into consideration new requirements,’ she says.

With strict planning rules, many homeowners are now often building down if they want to extend as they are prohibited from going up. ‘That doesn’t help either,’ adds Julia. ‘We are blocking paths for water to reach the drain runs, and limiting the ground space where water can stay.’

It was a horrific incident in the 1950s that made London look into flood prevention and eventually create The Thames Barrier – a retractable flood barrier made up of 10 steel gates which spans 520 metres across the River Thames. ‘It was built in response to floods in 1953, that swept down the east coast of the country and killed over 300 people,’ explains Sarah.

When it was first constructed in the 1980s the expectation was that it would be used once or twice per year, building up to 30 times per year by 2030, due to rising sea levels caused by climate change. However, in 2013/14 it needed to close 41 times.

And although it was originally envisaged to last until 2030, Sarah says, ‘we’ve invested heavily in the Thames Barrier to ensure it can continue to provide high protection to London until at least 2070 based on current climate projections.’

The Environment Agency are already planning for the future of the flood defences through the Thames Estuary 2100 Plan.

The Plan contains protection strategies against flooding for the next 15 years and beyond until the end of the 21st century, through ‘working with partners to continue to protect the 1.4 million people and £321 billion worth of property at risk of flooding in the capital’.

‘It’s a very long term plan that looks out beyond the end of the century,’ explains Sarah. ‘We are already embarking upon the earliest phase. So that we can adapt to a range of different climate futures, we review all the evidence on a number of social, environmental and economic indicators, including the latest sea level rise predictions, every 10 years to ensure that we are able to respond in a timely way should those predictions change. ‘

The plan also sets out approaches to managing flood risk are appropriate along the estuary based upon future flood levels.

This includes a system of defences constructed such as Thames Barrier, other smaller barriers, 330 kilometres of flood walls and embankments, pumping stations and flood gates.

In some locations this will mean raising or moving back existing riverside defences, according to Sarah – something that could impact those with riverside properties.

‘There will be some cases where defences will need to be raised by half a metre initially or there are other opportunities to push defences back and reshape the Riverside’, she admits.

‘We need to work with communities, existing properties, businesses and infrastructures and local authorites to get the best fit.’

The Environmental Agency is also bound by the Flood and Water Management Act 2010 to develop a National Flood and Coastal Erosion Risk Management (FCERM) Strategy for England to mitigate and tackle flood risk.

This includes expanded flood warnings by 2022 to all at-risk properties across England, with 62,000 more families to be added to the service, as well as more collaborative partnerships with national road, rail and utilities providers to ensure their investments are flood resilient and benefit the public.