When radio industry veteran Rob Loewenthal was trying to work out what to name his podcasting company in 2016, he thought of his friend, the prominent investigative journalist Hedley Thomas.

“[He] always backs long shots at the races and they go ‘Whooshkaa’ down the home straight and beat the favourite,” Mr Loewenthal said. “I thought: ‘wouldn’t it be nice to have a business like one of Hedley’s horses’.” 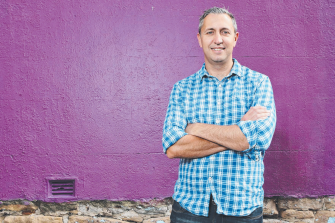 Whooshkaa has lived up to its name. On Friday, the audio giant Spotify announced it had bought the Australian podcasting platform that hosted Thomas’ wildly successful Teacher’s Pet for the Australian newspaper among a plethora of other shows. The terms of the transaction were not made public.

It marks the first Australian acquisition for Spotify, historically a music streaming service which has embarked on a major push into podcasting over the past two years. The Swedish company, which boasts 381 million users globally and a market value of $US43 million ($60 million) has spent substantial sums buying up exclusive rights to top rating, but sometimes controversial podcast shows, such the boundary-pushing Joe Rogan Experience and Bill Simmons’ The Ringer.

Whooshkaa, based in Surry Hills in inner Sydney, offers something different.

In a media release, Spotify made clear that Whooshkaa’s tools for traditional radio broadcasters to turn their programming into podcasts, inserting ads and distributing it to listeners via services like Spotify, are at “the heart of the acquisition”.

Those tools will be integrated into Megaphone, another platform for podcast businesses that Spotify bought last year.

The idea is that broadcasters will have a one stop shop to turn otherwise time-limited broadcasts into enduring pieces of media that can earn money from ads sold by Spotify through its audience network, an advertisement marketplace, and be measured and tracked thereafter.

“We believe the worldwide growth potential for digital audio is still largely untapped,” said Dawn Ostroff, Spotify’s chief content and advertising officer. “Through the addition of these new tools as well as the innovative team behind them, we are reinforcing our commitment to helping creators, publishers and advertisers realise the value of this opportunity.” 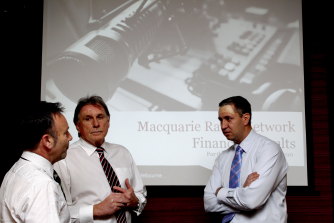 Robert Loewenthal (right) in 2010, when he was with Macquarie Radio, the owner of stations including 2GB and 3AW.Credit:Edwina Pickles

Spotify has taken in more than €1 billion ($1.57 billion) in revenue from advertising this year, though that includes listeners on the free tier of its music streaming business as well as podcasts.

The market is growing in Australia too.

Industry figures from Edison Research’s Infinite Dial survey showed 37 per cent of Australians aged over 12 listened to at least one podcast in the last month this year, up sharply from 25 per cent in 2020 but below the 41 per cent of monthly podcast listeners in the United States.

A report from the University of Canberra’s News & Media Research Centre cited figures showing a growing market for podcasting in Australia, especially among generation Y and Z listeners who are less likely to dial into traditional radio than their forebears.

Corey Layton, the head of digital audio at the iHeartPodcast Network and a former Whooshkaa employee, said the acquisition was a point of important recognition for the local industry. “I think radio companies globally and locally have heavily moved into the podcast space,” Mr Layton said. “For radio companies it’s about making the content be able to be heard in different ways.”

Mr Loewenthal, the Whooshkaa chief executive and founder who was once managing director of Macquarie Radio (now owned by the owner of this masthead) said: “We are looking forward to being part of Spotify’s bullish vision of the future of audio.”