Millipede that really does have 1,000 legs is discovered in Australia: Previous bugs only sported a maximum of 750

Despite their name, no millipede has been discovered with more than 750 legs – until now.

In a new paper published today, scientists report the discovery of the first millipede with more than 1,000 legs, found deep in an Australian mine.

In fact, it has a whopping 1,306 legs – more than any other animal – and belongs to a new species that has been named Eumillipes persephone.

Researchers measured four members of this new species, found underground in the mining area of the Eastern Goldfields Province of Australia.

At 3.76 inches long and 0.03 of an inch wide, the eyeless species has a long, thread-like body consisting of up to 330 segments, short legs and a cone-shaped head with antennae and a beak. 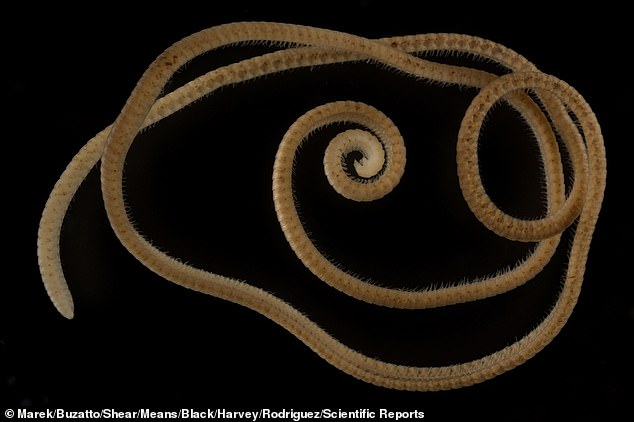 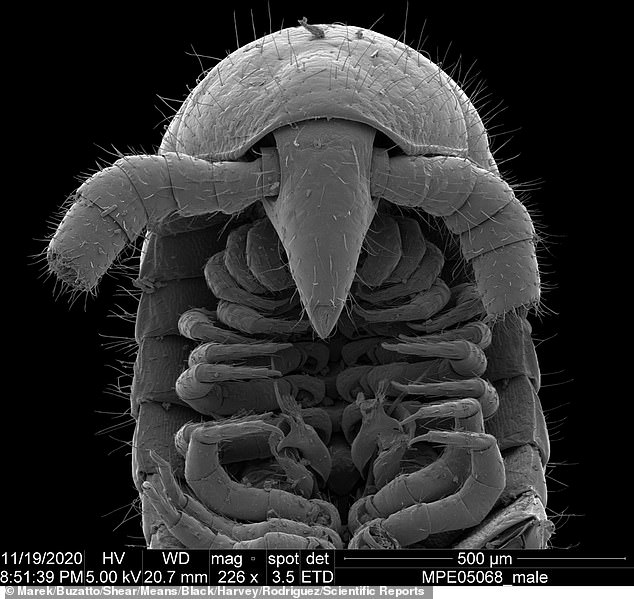 This animal has 330 segments, a cone-shaped head with enormous antennae, and a beak for feeding (pictured)

Along with colleagues, Paul Marek at Virginia Tech in Blacksburg discovered the millipede about 200 feet (60 metres) underground in a drill hole created for mineral exploration in the mining area of the Eastern Goldfields Province of Australia.

Centipedes and millipedes do not have 100 and 1,000 legs respectively, in spite of their prefixes.

‘The name “millipede” translates to a thousand feet (from mille “thousand” and pes “foot”),’ the authors say in their new paper, published today in Scientific Reports.

‘However, no millipede has ever been described with more than 750 legs.

‘We discovered a new record-setting species of millipede with 1,306 legs, Eumillipes persephone, from Western Australia.

‘This diminutive animal has 330 segments, a cone-shaped head with enormous antennae, and a beak for feeding.’

Its two antennae are used for navigating, to make up for its lack of eyesight.

The millipede’s name, Eumillipes persephone, derives from the Greek word eu- (true), the Latin words mille (thousand) and pes (foot), and references the Greek goddess of the underworld, Persephone.

The previous record holder for millipede with the most amount of legs was a Californian millipede species, Illacme plenipes, reported in 2012.

The females have up to 750 legs, outclassing the males who only have a maximum leg count of 562, researchers revealed at the time.

Now, analysis of the relationships between species suggests E. persephone is distantly related to Illacme plenipes.

Marek and colleagues suggest that the large number of segments and legs that have evolved in both species may allow them to generate pushing forces that enable them to move through narrow openings in the soil habitats they live in. 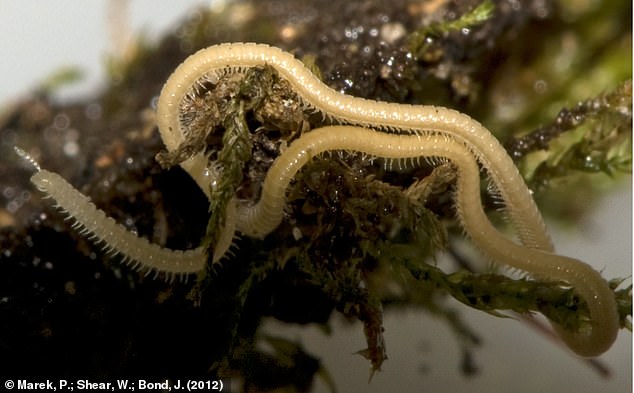 Illacme plenipes (pictured) was reported in 2012. Females have up to 750 legs, outclassing the males who only have a maximum leg count of 562

Super-elongation in millipedes – defined as more than 180 segments – is well known from the order Siphonophorida, including Illacme plenipes with 192 segments and 750 legs.In this graphic from the paper, Eumillipes persephone is compared with other species

According to the researchers, their finding highlights the biodiversity found within Western Australia’s Eastern Goldfields Province.

To minimise the impact of mining in this region on E. persephone, the authors advise that efforts should be made to conserve its underground habitat.

‘A large quantity of Australia’s gold, nickel, and other minerals are extracted from the Goldfelds, and intensive surface mining has occurred in the area for more than a century,’ they say.

‘Mineral exploration includes surveying underground via millions of drill holes that produced cores for elemental analysis in the region.’

MOST MILLIPEDES HAVE FEWER THAN A HUNDRED LEGS

Among the earliest animals to breathe atmospheric oxygen and with some extinct species that grew to two meters in length, millipedes have lived on this planet for more than 400 million years.

Millipedes are not insects; both ‘millipede and ‘inset’ are different kinds of arthropods, or ‘jointed leg’ invertebrate animals.

The word ‘millipede’ translates to ‘a thousand feet’, even though millipede species tend to have a few hundred legs or even fewer.

Only one millipede species has 1,000 legs – Eumillipes persephone, reported in 2021 and uncovered in a Western Australian mine.

Millipede bodies are split into a number of segments, and each segment has two sets of legs that attach to the body’s underside.

Millipedes look very different from their centipede cousins, which have one set of legs per segment that stick out to the body’s sides.

The smaller ones are less than an inch (2.5 centimeters) in length, but the common spirobolid millipede can grow to more than five inches (13 centimeters).