Look up tonight! Geminid Meteor Shower will peak this evening with up to 50 shooting stars over the UK every hour

Sky gazers will have a chance to enjoy what NASA calls the ‘best meteor shower of the year’ this evening, with up to 50 shooting stars every hour expected to be visible above the UK.

The Geminid Meteor Shower takes place every year between December 4 and December 17, but will peak tonight and into tomorrow.

When the Earth passes through the trails of dust left by asteroid 3200 Phaethon, that dust burns up in Earth’s atmosphere, creating a shower of ‘shooting stars’.

The Geminids are named after the point at which they appear to originate, in the constellation Gemini. 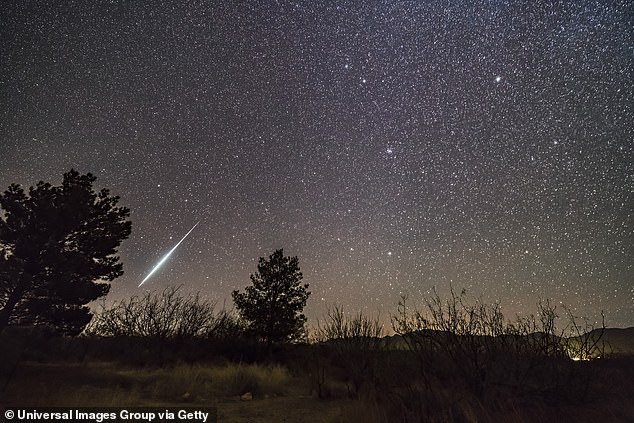 Sky gazers will have a chance to enjoy the Geminid Meteor Shower this evening (pictured in 2017), with up to 50 shooting stars every hour expected to be visible above the UK 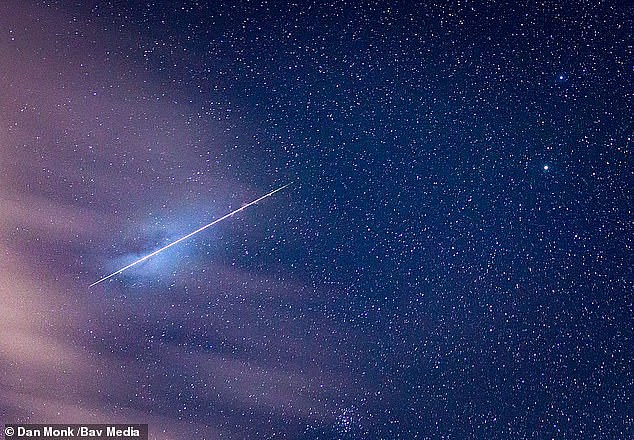 The Geminid Meteor Shower takes place every year between December 4 and December 17, but will peak tonight and into tomorrow 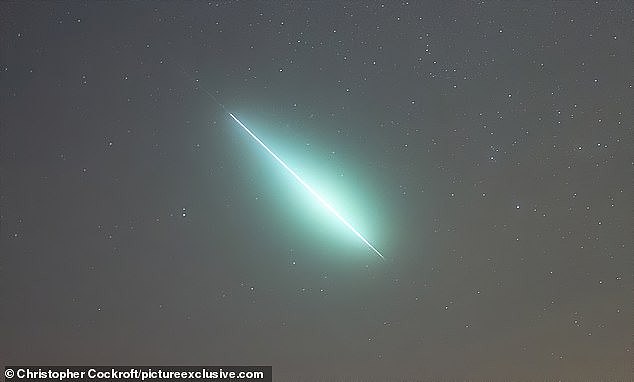 When the Earth passes through the trails of dust left by asteroid 3200 Phaethon, that dust burns up in Earth’s atmosphere, creating a shower of ‘shooting stars’

WHAT ARE THE GEMINIDS?

Geminids are pieces of debris from an object called 3200 Phaethon.

Long thought to be an asteroid, Phaethon is now classified as an extinct comet.

Nasa says it’s essentially a rocky skeleton of a comet that lost its ice after too many close encounters with the sun.

Earth runs into a stream of debris from 3200 Phaethon every year in mid-December, causing meteors to fly from the constellation Gemini.

Geminids occur between December 4 to December 17, with the best nights for viewing on December 13 and 14.

When the Geminids first appeared in the early 19th century, shortly before the US Civil War, the shower was weak and attracted little attention. There was no hint that it would ever become a major display.

The asteroid is named after the son of the Greek sun god Helios ‘Phaethon’ because it passes so close to the sun.

Legend claims the young demi-god was challenged to prove he was related to Helios, who was said to pull the sun across the sky.

To prove his divine provenance, Phaethon rode his father’s chariot, but was unable to control the horses, who then ran wild across the sky, dragging the sun with them.

Earth was almost destroyed in the ensuing chaos, which scorched the planet, burned vast amounts of vegetation and created the great deserts of Africa.

‘Rich in green-coloured fireballs, the Geminids are the only shower I will brave cold December nights to see,’ said Bill Cooke, lead for NASA’s Meteoroid Environment Office.

Tonight star gazers around the world have a chance to catch the spectacular display, with meteors shooting through the sky at speeds of up to 78,000 miles an hour — 40 times faster than a speeding bullet.

Usually the Geminid shower is visible in the late evening hours, but this year a waxing gibbous moon will be above the horizon during peak time for viewing.

When it sets shortly afterwards, anyone watching for meteors at around 2am local time from a dark-sky location should be able to spot them.

The peak time is more likely to be 3am up to dawn on Tuesday.

The reason for this is because the shower’s radiant point – the point in our sky from which the meteors seem to radiate – is highest at that time.

Observers are also more likely to see a greater number of Geminid meteors the higher the constellation Gemini the Twins climbs in their sky.

But for sky gazers who don’t want to be up in the early hours, it is still possible to catch the Geminids despite the light of the moon, as the bright ones will overcome it.

Up to 50 meteors an hour are likely to be visible above the UK overnight, but it is possible to see closer to 150 during a 60-minute period on an optimum night for the Geminids.

The meteors shine bright yellow, blue, green and red as they pass through the sky, and the brightest will leave a glowing trail along their path.

The shower is expected to continue until December 17, but the frequency of shooting stars will gradually decrease after tonight.

The meteors, small pieces of interplanetary debris, appear to radiate from near the bright star Castor in the constellation Gemini.

Friction with the upper atmosphere heats up the incoming debris, causing the air around them to glow brightly.

This leads to streaks of light that are also known as shooting stars.

All meteors associated with a shower have similar orbits, and they all appear to come from the same place in the sky, which is called the radiant.

The Geminid meteor shower was first reported in 1862, but it was not until 1983 that scientists determine 3200 Phaethon, was the source.

Phaethon, which is considered to be either an asteroid or an extinct comet, is only about three miles across, travels around the sun every 1.4 years and sheds its dust every time it nears Earth’s parent star.

The dusty debris ranges in size from a sand grain to a pea.

‘Although this year’s conditions are not the best for viewing the Geminid meteor shower, it will still be a good show to catch in our night skies,’ NASA wrote in a blog post.