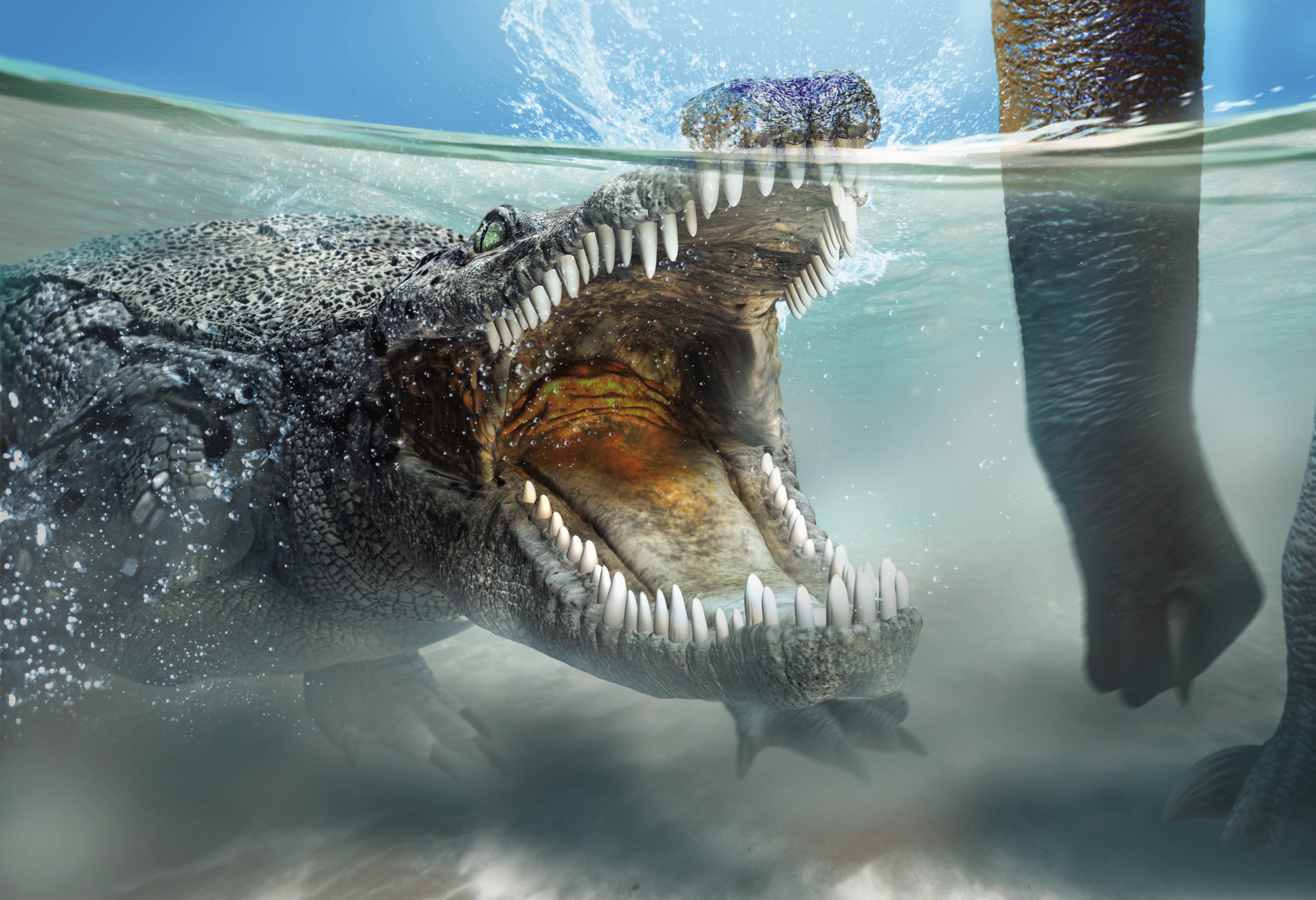 A ‘terror croc’ that preyed on dinosaurs has been unearthed in the badlands of Wyoming.

The primitive creature reached up to 14 feet long and weighed almost half a tonne, say scientists.

It used its powerful jaws packed with two inch razor sharp teeth to drag giant plant eaters to their doom as they drank at the water’s edge.

It is the best preserved specimen to date – and is a ‘missing link’ in the evolution of the reptiles.

He said: ‘It reveals the origin of their unique breathing system for the first dive.

‘Amphicotylus milesi has the backward extension of the nose duct and the short and curved tongue bone similar to modern crocodilians.

‘This suggests that, by keeping their external nostrils above the water surface, the crocodilian ancestors could raise the valve at the tongue.

‘They could breathe underwater while holding prey in the mouth, as modern crocodilians do today.’

The US resembled the Serengeti of modern day Africa when Amphicolytus prowled 155 million years ago.

Life in this environment during the Late Jurassic would have adapted to harsh droughts – followed by months of monsoon that flooded the rivers.

Large dinosaurs migrated like the herds in Africa do today – with Amphicotylus ready to pounce.

The scenario was similar to the annual life or death migration of wildebeest across the Serengeti.

Crocodiles and big cats lie in wait as the herd of more than one million makes its 1,000-mile loop across the savannas of Tanzania and Kenya.

It was an opportunistic predator with everything on the menu from frogs, lizards, turtles and fish to dinosaurs – and perhaps even pterosaurs.

The almost complete skeleton – along with 30 teeth – were dug up at a famous dinosaur graveyard known as the Morrison Formation.

Dr Yoshida said: ‘Goniopholidids have the long, flat snout and secondary palate of modern crocodylians, of which the acquisition is regarded as a key feature in their early evolution.’

Today’s crocodiles are the descendants of a terrestrial ancestor that gave rise to a lineage of successful semi-aquatic predators through the acquisition of a suite of unique characters.

Added Dr Yoshida: ‘Here, we report a new species, Amphicotylus milesi, with the description from the best-preserved specimen to date from Wyoming.

‘The anatomy sheds light on the acquisition of a new respiratory system and their early aquatic adaptation.’

Crocodiles can hold their breath underwater for up to an hour owing to an amazing ability to retain oxygen.

They are the ultimate survivors – dating back 230 million years. They can easily adapt – even moving on land with surprising speed.

There are very few species alive today – just 25. In the age of the dinosaurs, there were hundreds – the largest growing to over 30 feet and weighing three tonnes.

Amphicotylus, described in Royal Society Open Science, disappeared before the extinction of the dinosaurs 66 million years ago. The reason remains unknown.