From Ex Machina to Robocop, humanoid robots have been the subject of science fiction blockbusters for years.

Now, human-like robots are becoming a reality – and the latest bot from Engineered Arts is one of the most realistic yet.

The robotic head, dubbed Adran, has 22 custom actuators that allow it to move its eyes and mouth just like a human.

A creepy video of Adran in action shows the robotic head winking at the camera, moving its jaw from side-to-side and even grinning. 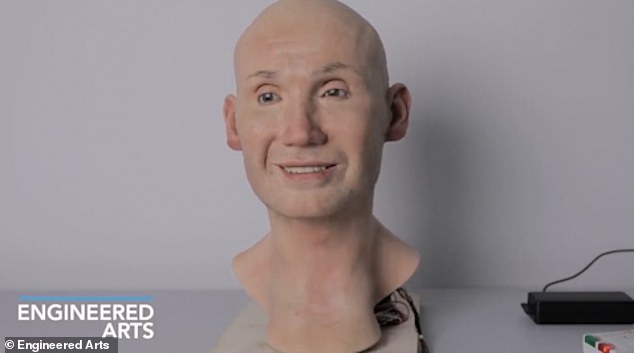 A creepy video of Adran in action shows the robotic head winking at the camera, moving its jaw from side-to-side and even grinning

How is the robot made?

Engineered Arts posted the video to its YouTube channel, although it admits that more work needs to be done before Adran is ready.

‘This is a small motion test for a Mesmer robot head,’ it said.

‘This head and neck has 22 custom servo actuators – only 5 around the mouth which is not enough for really good lip sync – which is why it’s not speaking in this clip.’

Adran is what Engineered Arts describes as a ‘Mesmer’, a system for building realistic humanoid robots that are powerful, elegant and cost-effective.

According to the Cornwall-based company, Mesmer robots can display a huge range of human emotions, and can be made to look like anyone.

‘Each Mesmer robot is designed and built from 3D in-house scans of real people, allowing us to imitate human bone structure, skin texture and expressions convincingly,’ it explained.

To create a Mesmer robot, Engineered Arts first uses a custom 3D scanning ‘Photogrammetry Rig’ to capture images of the subject from every angle.

‘They are then digitally reconstructed into a 3D model by comparing pixel colours and defining anchor points.’

Once the 3D digital model has been created from the Photogrammetry Rig, an accurate mould of the digital model is produced using a 3D printer.

Silicone is injected into the mould, before fine details like hair and skin colour are added by hand.

Finally, the silicone skin is place over a robotic head, allowing the bot to move just like a real face.

Engineered Arts has not revealed how much any of its robots cost to make.

On its website, it says: ‘Since our robots are all customisable – with innumerable options available – we don’t have a fixed price. More than a cup of coffee. Less than an island.’ 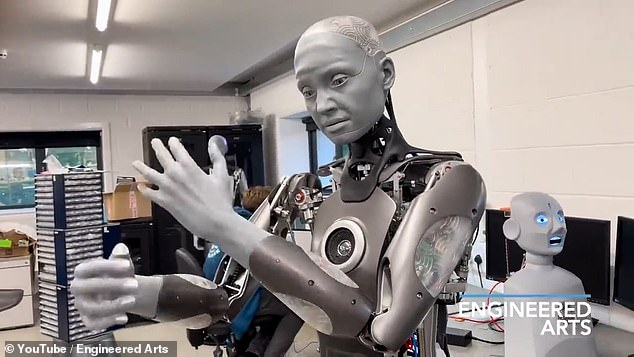 This isn’t the first time that Engineered Arts has hit the headlines for its humanoid robots. Earlier this month , it unveiled ‘the world’s most advanced’ humanoid robot, called Ameca

This isn’t the first time that Engineered Arts has hit the headlines for its humanoid robots.

Earlier this month, it unveiled ‘the world’s most advanced’ humanoid robot, called Ameca.

In a clip shared on Engineered Arts’ YouTube channel, the robot is seen warming up its shoulder, before opening its eyes and expressing a rather convincing look of shock or surprise.

It even blinks multiple times and observes its machine arm with curiosity.

The preview ends with Ameca reaching out its hand and admiring its combination of mechanical limbs and ligaments, actuators, and sensor arrays.