Stunning gold earring discovered in Denmark may have been gifted by the Emperor of Byzantium to a Viking chief 1,000 years ago, experts claim

A stunning gold earring discovered in Denmark may have been gifted by the Emperor of Byzantium to a Viking chief 1,000 years ago, experts claim.

Dating from the 11th century, the ‘completely unique’ gold jewellery has never been seen before in the Nordic countries.

Likely one of a pair, it was found by a metal detectorist in a field near Bøvling in West Jutland, Denmark.

It’s thought to have been originally crafted in Byzantium or Egypt and is potential evidence the Vikings had connections all the way around the Mediterranean.

The Byzantine Empire (395 to 1204 and 1261 to 1453), also known as the Eastern Roman Empire or Byzantium, was a powerful civilization based at Constantinople (modern-day Istanbul). 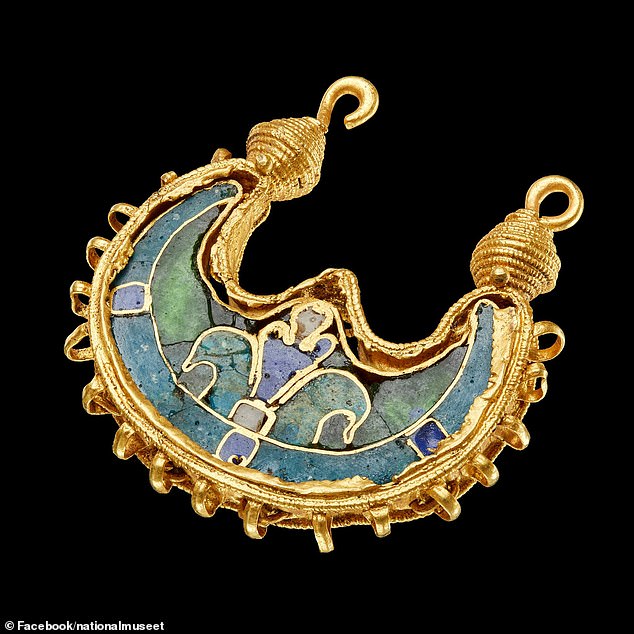 The earring has an email, now slightly cracked, formed in a motif of two stylised birds around a tree or a plant, which symbolises the tree of life The earring is probably from Egypt and reached all the way to Bøvling, where Frants Fugl Vestergaard found it on a field with a metal detector

The Byzantine Empire (395 to 1204 and 1261 to 1453), also known as the Eastern Roman Empire or Byzantium, was a powerful civilization based at Constantinople (modern-day Istanbul).

Constantinople was the capital of the ancient Byzantine empire. The empire held sway over much of Italy, Greece and Turkey for more than 1,000 years, the only one in history to have lasted a millennium.

In 1202, the Crusaders ransacked the city, stealing many of its treasures, and more was looted in later centuries.

It’s now being exhibited in Denmark National Museum’s Viking exhibition ‘Togtet’, which translates as ‘The Cruise’ and is all about Viking travels to the Middle East.

Experts have so far been unable to find a similar earring in the area that may have formed a pair.

‘It is completely unique to us, we only know of 10 to 12 other specimens in the whole world, and we have never found one in Scandinavia before,’ said Peter Pentz, inspector at the National Museum Denmark.

‘We had expected to find such a fine and invaluable piece of jewellery like this together with a large gold treasure or in a royal tomb and not on a random field in Bøvling.’

The find consists of a crescent-shaped gold plate inserted in a frame made of gold threads adorned with small gold balls and gold ribbons.

Its crescent-shaped plate is covered with an enamel, now slightly cracked, which would have been created by a special technique involving breaking and powdering glass before melting it with metal so it becomes opaque.

The motif of the enamel is two stylised birds around a tree or a plant, which symbolises the tree of life.

This type of jewellery is known especially from Muslim Egypt and Syria and from Byzantium and Russia.

In terms of style and craftsmanship, it’s similar to the Dagmark cross – an 11th or 12th-century Byzantine relic.

The earring and the Dagmark Cross are thought to both date from the Viking Age or the earliest Middle Ages and were likely not traded but donated by kings and emperors.

That explains why the Dagmark cross was found in a queen’s grave, at St. Bendt’s Church in Ringsted, Denmark in 1683. In contrast, the new treasure was found in a field in Bøvling without known Viking sites nearby, so how it ended up there is therefore a bit of a mystery.

The discoverer of the priceless find was 54-year-old Frants Fugl Vestergaard, who had searched the field many times before in the hunt for ‘danefæ’ – gold and silver in the earth without an owner.

As his detector gave a faint bleep, he picked up a clump of earth and crushed it in his hand to find the earring peeping out.

‘”Stop it”, I think, and then time stands still for me,’ he told the National Museum.

‘I get very humbled and wondered why I should find that piece and then even in West Jutland, where there is so much between the finds. It’s like getting a text from the past. It’s now being exhibited in Denmark National Museum’s Viking exhibition ‘Togtet’, which translates as ‘The Cruise’ and is all about Viking travels to the Middle East 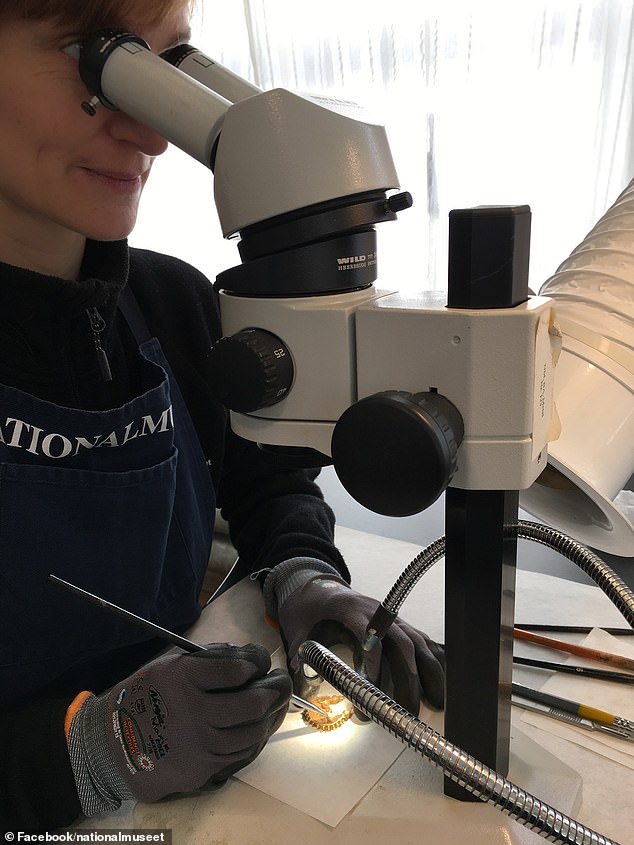 The earring is the first of its kind in Scandinavia, and there are only 10 to 12 pieces of the same kind worldwide

‘You always yearn to find something beautiful, a top find, and then you suddenly have it in your hands. It is completely inconceivable.’

One explanation for how it got there may be that many Vikings went into war service for the Byzantine emperor, who had a bodyguard consisting of warriors from Scandinavia.

Icelandic sagas show that mercenaries came home from the East with silk and weapons, and it is also said that the emperor occasionally donated fine gifts to his bodyguard.

So the earring could have been given personally by the emperor to a trusted Viking in the bodyguard and was then lost under unknown circumstances in Denmark.

The find confirms that West Jutland has always had strong connections around the world,’ said Astrid Toftdal Jensen, an inspector at Holstebro Museum, which is near its finding place.

Jensen hopes the earring can be lent to the museum at a later date so that it can be seen in the area where it was found.

1,400-YEAR-OLD AMETHYST RING ‘USED TO WARD OFF HANGOVERS’ IS DISCOVERED AT SITE OF BYZANTINE WINE FACTORY

An ancient gold ring set with amethyst, thought to be worn in an attempt to stop hangovers, has been found at the world’s largest ancient wine factory.

The ‘spectacular’ ring was found during excavations led by the Israel Antiquities Authority in the city of Yavne in central Israel.

This is the location of the 75,000 square-foot Byzantine wine factory, revealed earlier this year, that produced up to two million litres of wine per year in its prime.

With its lustrous violet-coloured centre stone, the ring may have been worn by a person of high status to indicate their wealth, perhaps around the 7th century AD.

It’s also possible that the last wearer was a wine taster who believed the purple stone would ward off the effects of alcohol – a widely-shared myth in the ancient world.

Amethyst is crystalline quartz that comes in colours ranging from pale lilac to a deep reddish purple.

The name of the popular gemstone means ‘not drunken’ in Greek, and it was widely believed in the ancient world to halt the effects of alcohol – although this is rubbished by modern science.