Wetland and river damage is putting one in six dragonfly species at risk of EXTINCTION, experts warn

Wetland and river damage is putting one in six dragonfly species at risk of extinction, the first global assessment of them has found.

The warning comes in the latest update of the International Union for Conservation of Nature (IUCN) Red List of threatened species — which for the first time now has more than 40,000 species at risk of extinction.

An assessment of 6,016 species of dragonflies and damselflies found that 16 per cent are now under threat, as freshwater breeding grounds such as marshes, swamps and free-flowing rivers increasingly deteriorate.

Wildlife experts said a decline in dragonflies underscores the urgent need to protect wetlands, which provide humans with clean water and food, store carbon and are home to one in 10 of the world’s known species. 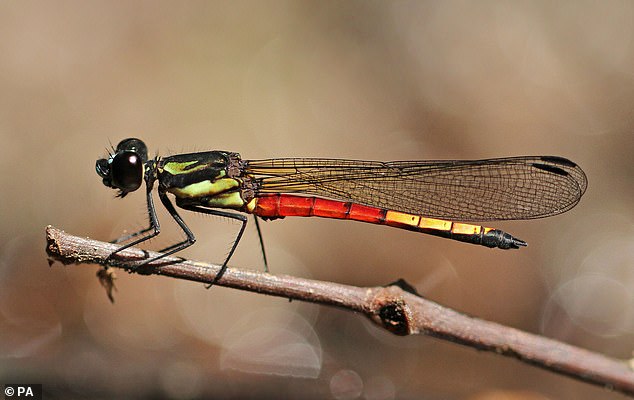 Fighting for survival: Destruction and damage to wetlands and rivers is putting one in six dragonfly species at risk of extinction, the first global assessment of them has found

Species on the endangered red list are animals of the highest conservation priority that need ‘urgent action’ to save.

The Pyrenean desman – a semiaquatic mammal related to moles, with a long sensitive nose and large webbed feet, and found only in rivers in Andorra, France, Portugal and Spain – has also seen its situation worsen, moving from vulnerable to extinction to the higher-risk category of endangered.

Its population has declined by as much as 50 per cent throughout its range since 2011, as human impacts such as hydropower plants, dam and reservoir construction, water taken for agriculture, invasive species, illegal fishing, water pollution, climate-driven droughts and excavation of rivers take their toll.

The reasons for dragonfly and damselfly declines vary around the world, the IUCN said, with pesticides, pollutants and climate change the greatest threats in Europe and North America and a growing risk worldwide.

More than a quarter of species are threatened in South and South East Asia, mostly due to clearing of rainforests and wetlands for crops such as palm oil.

In Central and South America, the major cause of their decline is clearing of forests for residential and commercial construction, the conservation body said.

‘Globally, these ecosystems are disappearing three times faster than forests.

‘Marshes and other wetlands may seem unproductive and inhospitable to humans, but in fact they provide us with essential services.

‘They store carbon, give us clean water and food, protect us from floods, as well as offer habitats for one in ten of the world’s known species.’

She added:  ‘To conserve these beautiful insects, it is critical that governments, agriculture and industry consider the protection of wetland ecosystems in development projects, for example by protecting key habitats and dedicating space to urban wetlands.’

With the latest update, the IUCN Red List assesses the status of 142,577 species, of which 40,084, or more than 28 per cent, are threatened with extinction.

That includes 8,722 species of mammal, amphibians, reptiles, birds, invertebrates and plants that are critically endangered — just one step away from extinction.

A recent study in Canada found that over the last century, the beetles in the region have shrunk.

By looking at eight species of beetle and measuring the animals from past and present they found that some beetles were adapting to a reduced body size.

The data also showed that the larger beetles were shrinking, but the smaller ones were not.

Around 50 million years ago the Earth warmed by three degrees Celsius (5.4°F) and as a result, animal species at the time shrunk by 14 per cent.

Another warming event around 55 million years ago – called the Paleocene-Eocene Thermal Maximum (PETM) – warmed the earth by up to eight degrees Celsius (14.4°F).

In this instance, animal species of the time shrunk by up to a third.

Woolly mammoths were a victim of warming climate, shrinking habitat and increased hunting from a growing early-human population which drove them to extinction – along with many large animals

With the global temperatures set to continue to rise, it is expected the average size of most animals will decrease.

As well as global warming, the world has seen a dramatic decrease in the amount of large animals.

So called ‘megafauna’ are large animals that go extinct. With long life-spans and relatively small population numbers, they are less able to adapt to rapid change as smaller animals that reproduce more often.

Often hunted for trophies or for food, large animals like the mastadon, mammoths and the western black rhino, which was declared extinct in 2011, have been hunted to extinction.