Two decades ago Microsoft launched its very first Xbox, and the primary reason to get one was Halo; a sci-fi shooting masterpiece unlike anything seen on a games console before. The series has since sold 81 million game copies, generating more than $8.5 billion in product sales.

This week the company is publishing the single-player campaign portion of Halo Infinite — a “spiritual reboot” of the series which many fans feel has lost its way in recent years — hoping to bring old players back and inspire new ones with its complex story and slick combat. 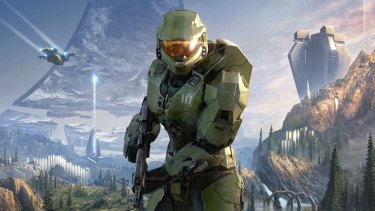 As a ‘spirtual reboot’, Halo Infinite is designed to get the franchise back to basics while also expanding it into a platform that can deliver 10 years of story and content.Credit:

“We’re trying to make a love letter to Halo, to allow people to have the emotional connection they did to the games they played 20 years ago and ever since,” said Paul Crocker, associate creative director at 343 Industries, the Microsoft studio that took over from series creators Bungie in 2010.

“Every combat encounter is this polished, tight, exciting experience. That’s what makes Halo sing, so that’s what we’ve really tried to keep in the game, while also giving you the biggest campaign we’ve ever made and an open expansive world that will enable you to play at your own pace.”

Halo Infinite has a lot riding on it, and is a massive task for 343. It has to return the core gameplay loop players love and remember from the original game and its immediate sequels, while walking back the divisive narrative direction of the studio’s own Halo 4 and 5. And now that Microsoft’s goal is less about selling consoles and games, and more about driving engagement through its Game Pass subscription, Infinite also has to pivot to a service-based open world platform that can be updated with new content and stories for the next 10 years. 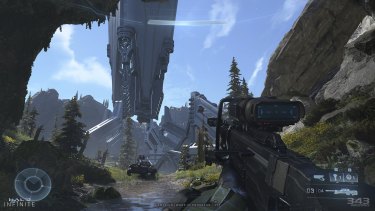 You can scour the world for upgrades, challenges and special weapons, or you can follow a traditional Halo story structure, but one doesn’t really influence the other.

After playing through the game early I feel that the task may have been altogether too big. The open world feels homogenous and empty in places, all rendered in the same sci-fi industrial meets national park tone, and the Far Cry style tasks it contains feel separate and walled off from the traditional Halo story missions that take place mostly underground.

And the narrative itself — though far from the train wreck of Halo 5 — is self-consciously caught up in dismantling the weird curveballs of the last few games, which will be baffling for new players and disappointing for old fans hoping for more of that classic interstellar intrigue.

But despite these criticisms, Halo Infinite’s campaign ultimately feels like a success. In pure moment-to-moment gameplay it’s the best the series has felt since Halo 3. Combat tenets like the grenades, weapon mix, recharging shields and melee attacks all feel right, with new gear like the grappling hook or railroad-spike-launching Skewer genuinely expanding your options while staying authentic to the original vibe.

Vehicles also feel more vital than ever, and skirmishes in the open world come with a degree of freedom and creativity that’s both new to Halo and feels very much at home. The story may be esoteric, but it’s still engaging thanks in no small part to returning voice actors Steve Downes and Jen Taylor in the key roles, very much reviving their fun dynamic from the very first game.

Infinite is set on a mystical ring-shaped world, with lush forests and fauna on top of ancient technological installations, and the entire thing evokes “Arriving on Halo”, the second mission of the original game which was responsible for blowing a generation of young gamers’ minds. 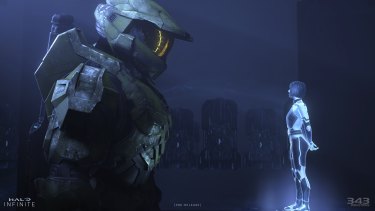 Chief is paired with a new AI partner in Infinite, who greatly resembles his original partner Cortana before she went off the rails in Halo 4 and Halo 5.

Following the objectives from place to place gets you a classic Halo experience. You play as Master Chief — a saviour of humankind and Earth’s greatest supersoldier — as he unravels the mysteries of the ring and prevents an alien force from using it to commit galactic genocide. But as the areas of the ring become available you’re free to go exploring. You can rescue allied soldiers, disvoer secrets and audio logs, take down alien infrastructure, or assassinate “high value targets” to win operating bases and unlock powerful custom weapons.

“All the missions on the surface of the ring are non-linear, so you don’t have to engage with any of them in order to complete the areas,” Crocker said.

“Part of it is encouraging you to come back once you’ve engaged with more of the game, and take them out later if they become too challenging.”

This was certainly the case with my playthrough, where my repeated attempts to assassinate an invisible Elite were frustrated at every turn, until I collected a threat sensor upgrade that let me keep tabs on him. Another target was a sniper nestled in the top of a mountain, where he could easily pick me off as I approached; until I stole a flying Banshee and came back to crush him from behind.

After playing for 11 hours and completing the story I’ve only worked through 30 per cent of the total content, with the world littered with objectives, upgrades and even cheat-mode-enabling skulls to find. And the more you do in the open world, the more weapons and vehicles you can summon on demand from your captured bases, which in turn gives you more tools for the harder assassinations.

I may be a bit disappointed that the story and open world are two very distinct parts of the game, but that doesn’t prevent both from being an enormous amount of fun. And taken together with the stellar competitive multiplayer experience that’s free to play and has already been live for a few weeks, this feels like the most relevant a new Halo game has been for a decade.

Halo Infinite’s campaign is out on Thursday for PC, Xbox One and Xbox Series X/S.