NASA inaugurated its 23rd class of new astronauts on Monday, which includes 10 individuals who are set to walk on the moon and maybe even Mars.

Deemed the ‘Artemis Generation,’ this group consists of several former US military, an ex-SpaceX medical director and a bioengineer who also participated in the 2020 Tokyo Olympics as a track cyclist.

The name is a reference to NASA’s Artemis program, which aims to send the first woman and the first person of color to moon as early as 2025.

This is NASA first new class in four years and the group is set to begin the two-year training process in January 2022. 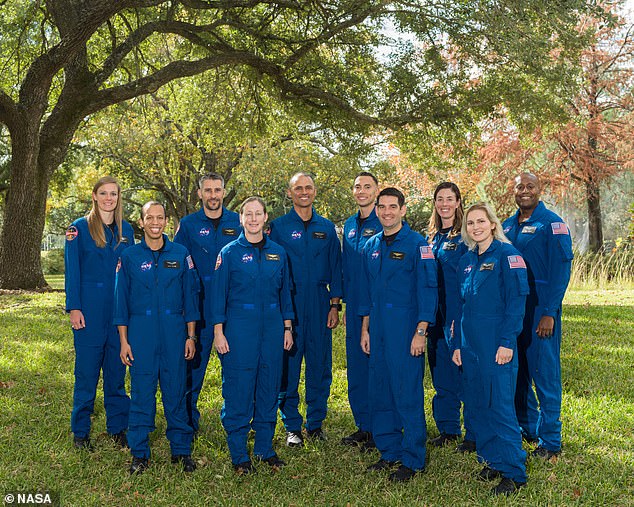 ‘To date, NASA has selected 350 astronaut candidates to fly on its increasingly challenging missions to explore space,’ NASA shared in a statement.

‘More are needed to see the space station into its third decade of science in low-Earth orbit and propel exploration forward as part of the Artemis missions and beyond.’

The new batch of fresh astronauts were among more than 12,000 applicants who applied last year.

NASA Administrator Bill Nelson introduced the members of the 2021 astronaut class during a livestreamed event hosted at Ellington Field near NASA’s Johnson Space Center in Houston. 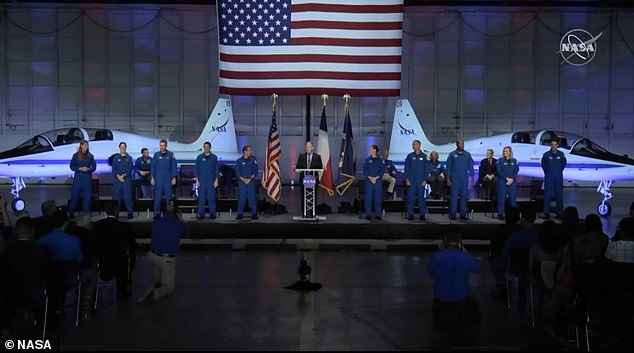 ‘Alone, each candidate has ‘the right stuff,’ but together they represent the creed of our country: E pluribus unum – out of many, one.’

Once the group finishes training, they could be assigned to missions that involve performing research aboard the space station, launching from American soil on spacecraft built by commercial companies, as well as deep space missions to destinations including the Moon on NASA’s Orion spacecraft and Space Launch System rocket.

Pam Melroy, former NASA astronaut and NASA’s deputy administrator, told the candidates: ‘Each of you has amazing backgrounds.

‘You bring diversity in so many forms to our astronaut corps and you stepped up to one of the highest and most exciting forms of public service.’

With the addition of these 10 members of the 2021 astronaut candidate class, NASA now has selected 360 astronauts since the original Mercury Seven in 1959.

The new members come from all different walks of life and backgrounds, but many are former Air Force and Navy pilots.

Dr Menon served as SpaceX’s medical director, which means he monitored medical conditions of astronauts aboard the Crew Dragon as they flew to and from the ISS.

Dr Birch, a bioengineer, was a track cyclist during the 2020 Tokyo Olympics and Dr Williams, a medical physicist, has been involved in cancer treatment at Brigham and Women’s Hospital and Dana-Farber Cancer Institute in Boston.

Johnson center Director Vanessa Wyche said: ‘We’ve made many giant leaps throughout the last 60 years, fulfilling President Kennedy’s goal of landing a man on the moon.

‘Today we reach further into the stars as we push forward to the Moon once again and on to Mars with NASA’s newest astronaut candidate class.’

During the event, some of the astronaut candidates were asked what spaceflight assignment they hope to receive and Dr Berrios, who is an Air force test pilot, answered: ‘Any mission that I can be assigned to.’

Deemed the ‘Artemis Generation,’ this group consists of several former US military, an ex-SpaceX medical director and a bioengineer who also participated in the 2020 Tokyo Olympics as a track cyclist

‘I think it would be great if NASA could scale up the Ingenuity helicopter that’s currently flying on Mars to maybe fit two people,’ he continues. The robotic device, which is about the size of a softball with spindly legs sticking out, has completed 16 flights on the red planet since arriving there in February.

One of the pilots – Air Force Maj. Marcos Berrios, who is from Puerto Rico – volunteered during a question-and-answer session to fly a life-size successor to NASA’s mini helicopter at Mars. 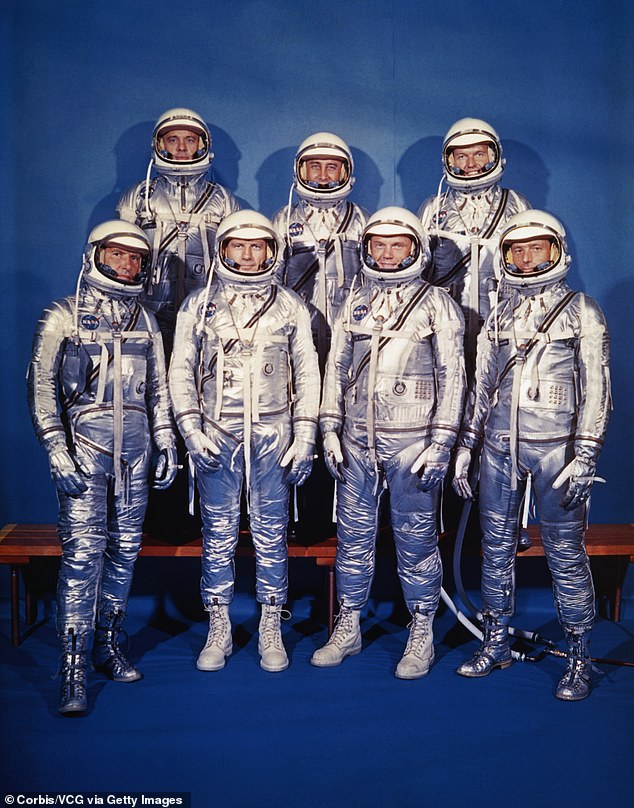 ‘I know Deniz, the other helicopter pilot here, and I would love to take it for a spin for science,’ he said, drawing laughs and applause from the audience.

The first class of astronauts, also known as the Original Seven, was announced on April 19, 1959.

The seven men, all military test pilots, were carefully selected from a group of 32 candidates to take part in Project Mercury, America’s first manned space program.

Meet NASA’s 23rd class of astronauts: These 10 individuals are set to walk on the moon and potentially Mars

She later earned a master’s degree in computational and applied mathematics from Rice University. Ayers is an experienced combat aviator with more than 200 combat hours and more than 1,150 hours of total flight time in the T-38 and the F-22 Raptor fighter jet. One of the few women currently flying the F-22, in 2019 Ayers led the first ever all-woman formation of the aircraft in combat.

Marcos Berríos, 37, major in U.S. Air Force, grew up in Guaynabo, Puerto Rico. While a reservist in the Air National Guard, Berríos worked as an aerospace engineer for the U.S. Army Aviation Development Directorate at Moffett Federal Airfield in California.

He is a test pilot who holds a bachelor’s degree in mechanical engineering from the Massachusetts Institute of Technology and a master’s degree in mechanical engineering as well as a doctorate in aeronautics and astronautics from Stanford University. A distinguished pilot, Berríos has accumulated more than 110 combat missions and 1,300 hours of flight time in more than 21 different aircraft.

Christina Birch, 35, grew up in Gilbert, Arizona, and graduated from the University of Arizona with a bachelor’s degree in mathematics and a bachelor’s degree in biochemistry and molecular biophysics. After earning a doctorate in biological engineering from MIT, she taught bioengineering at the University of California, Riverside, and scientific writing and communication at the California Institute of Technology. She became a decorated track cyclist on the U.S. National Team.

Deniz Burnham, 36, lieutenant in the U.S. Navy, calls Wasilla, Alaska, home. A former intern at NASA’s Ames Research Center in Silicon Valley, California, Burnham serves in the U.S. Navy Reserves. She earned a bachelor’s degree in chemical engineering from the University of California, San Diego, and a master’s degree in mechanical engineering from the University of Southern California in Los Angeles. Burnham is an experienced leader in the energy industry, managing onsite drilling projects throughout North America, including in Alaska, Canada, and Texas.

Luke Delaney, 42, a retired U.S. Marine, grew up in Debary, Florida. He holds a degree in mechanical engineering from University of North Florida and a master’s degree in aerospace engineering from the Naval Postgraduate School. He is a distinguished naval aviator who participated in exercises throughout the Asia Pacific region and conducted combat missions in support of Operation Enduring Freedom.

As a test pilot, he executed numerous flights evaluating weapon systems integration, and he served as a test pilot instructor. Delaney most recently worked as a research pilot at NASA’s Langley Research Center, in Hampton, Virginia, where he supported airborne science missions. Including his NASA career, Delaney logged more than 3,700 flight hours on 48 models of jet, propeller, and rotary wing aircraft.

Douglas served in the U.S. Coast Guard as a naval architect, salvage engineer, damage control assistant, and officer of the deck. He most recently was a senior staff member at the Johns Hopkins University Applied Physics Lab, working on maritime robotics, planetary defense, and space exploration missions for NASA.

He graduated from Empire Test Pilots’ School, supported the Joint Chiefs of Staff at the Pentagon, and was most recently assigned as the prospective executive officer for Strike Fighter Squadron 81. He has more than 2,500 flight hours in 30 types of aircraft, more than 500 carrier arrested landings, and flew 39 combat missions.

Anil Menon, 45, lieutenant colonel in the U.S. Air Force, was born and raised in Minneapolis, Minnesota. He was SpaceX’s first flight surgeon, helping to launch the company’s first humans to space during NASA’s SpaceX Demo-2 mission and building a medical organization to support the human system during future missions. Prior to that, he served NASA as the crew flight surgeon for various expeditions taking astronauts to the International Space Station.

Menon is an actively practicing emergency medicine physician with fellowship training in wilderness and aerospace medicine. As a physician, he was a first responder during the 2010 earthquake in Haiti, 2015 earthquake in Nepal, and the 2011 Reno Air Show accident. In the Air Force, Menon supported the 45th Space Wing as a flight surgeon and the 173rd Fighter Wing, where he logged over 100 sorties in the F-15 fighter jet and transported over 100 patients as part of the critical care air transport team.

Christopher Williams, 38, grew up in Potomac, Maryland. He graduated from Stanford University in 2005 with a bachelor’s degree in physics and a doctorate in physics from MIT in 2012, where his research was in astrophysics. Williams is a board-certified medical physicist, completing his residency training at Harvard Medical School before joining the faculty as a clinical physicist and researcher.

He most recently worked as a medical physicist in the Radiation Oncology Department at the Brigham and Women’s Hospital and Dana-Farber Cancer Institute in Boston. He was the lead physicist for the Institute’s MRI-guided adaptive radiation therapy program. His research focused on developing image guidance techniques for cancer treatments.

Wittner was commissioned as a naval officer through an enlisted-to-officer program and has served operationally flying F/A-18 fighter jets with Strike Fighter Squadron 34 in Virginia Beach, Virginia, and Strike Fighter Squadron 151 in Lemoore, California. A graduate of U.S. Naval Test Pilot School, she also worked as a test pilot and project officer with Air Test and Evaluation Squadron 31 in China Lake, California.