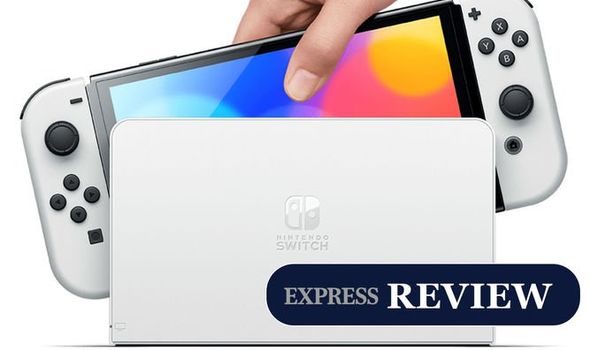 The Switch has been a monumental hit for Nintendo with over 89 million consoles shipped to customers worldwide. And now, the gaming giant is hoping it can boost those sales figures even further with the launch of a new iteration of the portable-cum-home console called the Switch OLED.  As the name reveals, this device arrives with a gorgeous OLED display, which offers a sizable upgrade over the previous console (and portable-only Switch Lite) which only features an LCD display.

But is this new screen enough to warrant splashing the cash and upgrading to this more expensive Nintendo console? We’ve been playing on both of these devices and here’s our verdict…

There’s no denying that the new Switch OLED offers a big upgrade over the standard model. The new display is not only brighter, but it’s also bigger – so you’ve got more room to play your favourite games.

The original Switch includes a six-inch LCD screen but things are boosted to a bigger seven-inch panel on this new model. We’ve used both of these consoles side-by-side and there really is no comparison.

The new OLED version is streets ahead with that larger viewing area, rich blacks and punchy colours offering a far more immersive experience.

There’s nothing wrong with the original and it’s still a great device, but once you’ve tried the OLED model you really won’t want to go back.

One thing that is worth noting is that Nintendo hasn’t upped the refresh rate on this upgrade with things still stuck at 60Hz. Most modern phones, including the latest iPhone 13, have all now moved over 120Hz technology which offers silky-smooth graphics and it’s a shame the Switch OLED hasn’t followed this lead.

This 120Hz technology is also a big selling point of the new Xbox and PS5 too.

Nintendo hasn’t tinkered too much with the design of the new Switch, but that’s no bad thing as the original has stood the test of time. What the gaming firm has done with this new model is to make some minor adjustments that all add up to make a big difference.

The biggest upgrade is the improved kickstand, which now makes the Switch more sturdy when playing on a table-top. It can be adjusted to any angle, so you can always avoid reflections on the screen as you play on a plane, train, or outside. The new kickstand, which now runs the length of the console, is a huge improvement over the original Switch, which has a pretty flimsy piece of plastic that pops out of the rear case.

Some other things you’ll notice is a slightly larger power button on the top and the volume rocker has also been expanded to make it easier to pump up the tunes.

Other than that, things are pretty much the same with a USB-C charging port on the base, all the buttons in the same place and the usual way to detach the Joy-Cons for some multi-player action.

The one downside of this new model is that it is a tiny bit heavier than the original, weighing in at just over 420 grams compared to 400 grams.

The Nintendo Switch OLED model can be pre-ordered directly from Nintendo. Priced at £309.99, the big draw of the new Switch is a gorgeous seven inch OLED screen – and if you mainly game on the go this will be a big benefit for you.

The Switch OLED also comes with a new dock and is available in a striking new white colour scheme. Pre-orders for the Switch OLED are up ahead of the console’s October 8 release date.

Amazon UK is taking pre-orders for the Switch OLED right now and have a number of bundles available. One of these includes the Switch OLED console and a snazzy carry case to help keep your new console safe while you’re out and about.

If you’re looking for something to play on your shiny new Switch OLED then why not pick up Metroid Dread? Amazon UK has a Switch OLED bundle which includes the striking looking new adventure starring iconic space bounty hunter Samus Aran.

GAME has a range of Switch OLED bundles available priced at £349.99. These bundles include a Switch OLED console as well as one game – either Animal Crossing: New Horizons, Metroid Dread, Mario Kart 8 or Super Mario 3D World + Bowser’s Fury.

The Switch OLED also comes in the neon colour scheme seen on the original console. Besides the new screen and dock, the Switch OLED boasts better internal storage, a wide adjustable stand for tabletop mode and enhanced portable audio.