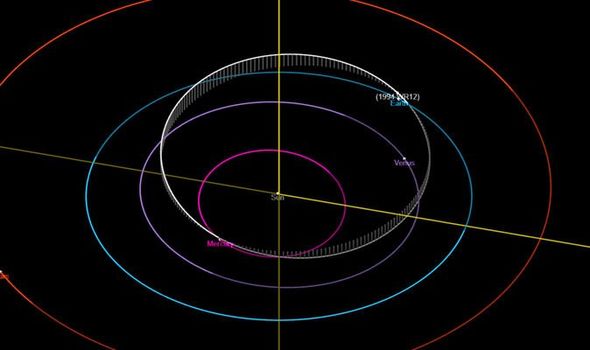 According to NASA, the space rock was spotted by astronomer Carolyn Shoemaker at the Palomar Observatory. Dubbed 1994 WR12, it is about as long as the Great Pyramid of Giza is tall.

The asteroid was classified as an earth impact risk by the JPL Centre for Near Earth Object Studies until 2016.

It was then removed from their Sentry List after observations deemed it not to be a threat.

If it were to hit earth, the impact is estimated to be the equivalent to 77 megatons of TNT.

That would be roughly 1.5 times more powerful than the Tsar Bomba, the largest ever nuclear weapon detonated.

However, scientists expect the asteroid to pass earth at a healthy distance of 3.8 million miles.

NASA says: “As they orbit the Sun, NEOs can occasionally approach close to Earth.

“Note that a ‘close’ passage astronomically can be very far away in human terms: millions or even tens of millions of kilometres.”

In this particular case, NASA has ruled out any probability of impact with Earth and does not expect this to change.

It adds: “Because of the ongoing search efforts to find nearly all the large NEOs, objects will occasionally be found to be on very close Earth approaching trajectories.

There are, however, processes by which asteroids and comets can be shifted from their orbits towards us.

NASA notes: “Occasionally, asteroids’ orbital paths are influenced by the gravitational tug of planets, which cause their paths to alter.

“Scientists believe stray asteroids or fragments from earlier collisions have slammed into Earth in the past, playing a major role in the evolution of our planet.”

A force known as the Yarkovsky effect can also cause an asteroid to veer off-course.

The effect occurs when a space rock is heated in direct sunlight and cools down to release radiation from its surface.

NASA says: “This radiation exerts a force on the asteroid, acting as a sort of mini-thruster that can slowly change the asteroid’s direction over time.”

There is also the possibility of asteroids or fragmented asteroids, being redirected towards us after colliding with other space rocks.

In terms of the potential of an object colliding with earth, Professor Alan Duffy told CBS: “Don’t look at it.

“I mean, it’s going to be hard not to – the brightness of the glare from these objects burning up in the atmosphere, that‘s actually what caused a lot of the injuries in Chelyabinsk,” a meteor strike in Russia in 2013.

He added: “people not unreasonably looked up at this enormous burning fireball in the sky, whose brightness was essentially that of the Sun by the time it finally erupted.

“That caused a lot of retina damage – so make sure you’re not looking right at it.”