Are you feeding your dog too often? Pups fed once a day are less likely to be diagnosed with age-related conditions than pooches fed more often, study claims

Dogs that are only fed once per day may be less likely to go to develop age-related conditions like gastrointestinal, orthopaedic and liver disorders, a study has found.

University of Arizona-led experts analysed data on more than 24,000 pet dogs for links between feeding rates and cognitive function and health outcomes.

Canines may benefit from less frequent feeding, the researchers said, because of their hunting origins — with their wolf ancestors often going for days without food.

However, the team warned that further studies are needed to validate the findings, and that it is too early to recommend owners change their dogs’ feeding regimens. 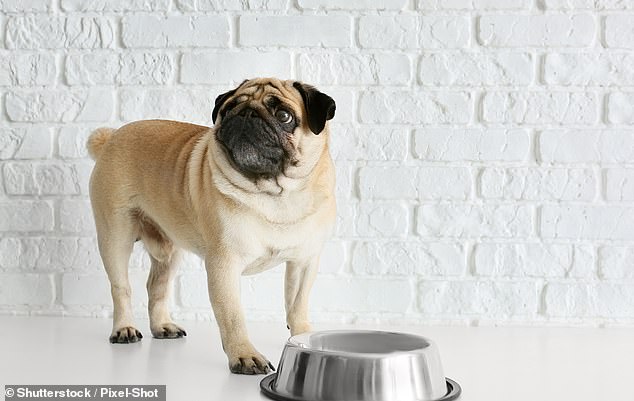 Dogs that are only fed once per day may be less likely to go to develop age-related conditions like gastrointestinal, orthopaedic and liver disorders, a study has found (stock image) 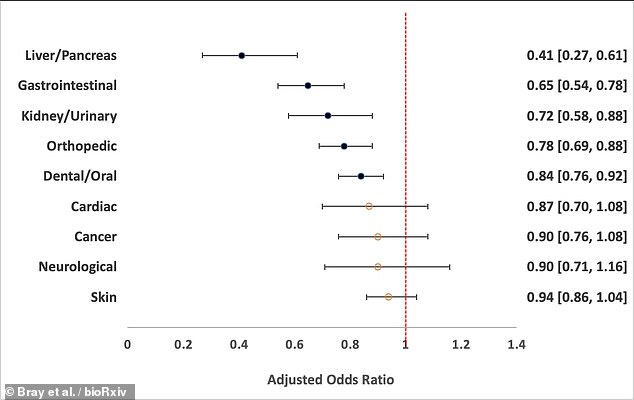 University of Arizona-led experts analysed data on more than 24,000 pet dogs for links between feeding rates and both cognitive function and health outcomes. Pictured: the team found that dogs fed once daily experienced lower odds of developing nine different broad types of age-related health complications than those fed more frequently

SHOULD I CHANGE MY DOG’S MEAL REGIME?

Not yet, the researchers have said, as more studies are needed to confirm that the associations between health and meal frequency are causal and not merely just correlative.

For example, the team explained, their study did not assess how much each dog was eating daily — and therefore it could be that dogs being fed twice daily were experiencing worse health outcomes as a result of being fed more, not more often.

If you are in doubt as to how much and when to feed your pet, you should consult a veterinary specialist.

The research was undertaken by dog cognition expert Emily Bray of the University of Arizona and her colleagues.

‘For nearly a century, caloric restriction has been known to extend lifespan and delay age-associated pathology in laboratory animals,’ the team wrote in their paper, noting also that time-restricted eating may also have benefits for us humans.

‘Companion dogs provide a potentially powerful animal model in which to better understand the relationship between diet and age-related health outcomes.

‘Once-daily feeding in dogs serves as a natural model for the intermittent fasting/time-restricted feeding protocols currently being studied both in preclinical rodent models and in human trials.’

The researchers analysed data from the Dog Aging Project, a US initiative launched by paper author and University of Washington biologist Matt Kaeberlein in 2019 that aims to explore the genetic and environmental causes of canine aging.

Dr Bray and colleagues were thus able to compare the effect of different feeding regimes on nine different broad health categories including cardiac, dental and neurological health for 24,238 pet dogs.

Additionally, the team evaluated the impact of feeding frequency on cognitive function for a smaller subset of 10,474 canines.

After controlling for confounding factors like age, breed and sex, the researchers found that dogs that were fed once daily had lower scores on a test of cognitive issues than their peers that were fed twice or more daily.

Similarly, canines that were only given one meal a day also appeared to exhibit lower odds of developing dental, gastrointestinal, kidney/urinary, liver/pancreas and orthopaedic disorders.

‘Our findings suggest that once-a-day feeding in dogs is associated with improved health across multiple body systems,’ the team wrote in their paper.

‘In my view, it’s pretty compelling correlative evidence,’ Professor Kaeberlein told the New Scientist, but cautioned that the study has not established a causal link, and that other factors, like the amount that the dogs eat overall, may also be in play.

He added: ‘Based on this study, we are not recommending that people make a change in the way they are feeding their dogs.’ 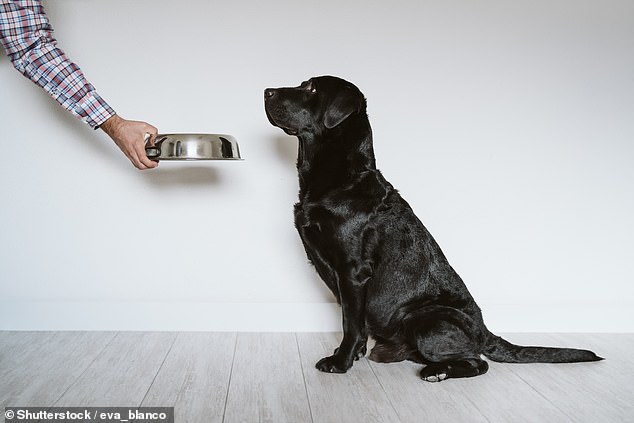 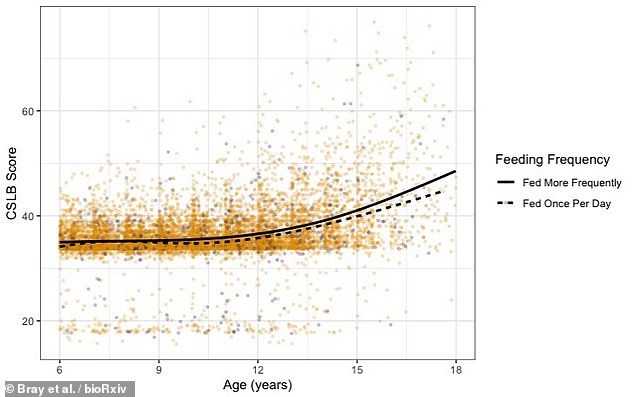 After controlling for confounding factors like age, breed and sex, the researchers found that dogs that were fed once daily had lower scores on a test of cognitive issues (pictured, where darker points represent dogs fed once daily, while the other points are those fed more often)

‘The strength of the study is that numbers are large and the statistical methods are sound,’ University of Liverpool veterinarian Alex German told the New Scientist.

However, he cautioned, ‘people shouldn’t change the way they feed their dogs until further studies are done.’

In the future, the researchers are hoping to explore the impact of how much — as well as how often — pet dogs eat, as well as the role that obesity might play in the development of age-related canine health conditions.

A pre-print of the researchers’ article, which has not yet been peer-reviewed, can be read on the bioRxiv repository.

More information on the Dog Aging Project — which aims to expand to include international participants next year — can be found on their website.