The science behind the perfect HUG: Embraces lasting between five and ten seconds are the most pleasant – but arm position doesn’t matter, study claims

If you want to give the perfect hug, embrace your partner for somewhere between  five and 10 seconds and don’t worry about arm position, a new study suggests.

Psychologists in London looked at how much pleasure volunteers got from engaging in hugs of different durations and orientations.

Longer hugs, between five and 10 seconds, were more pleasant than very short hugs (one second), the experts found, but arm position doesn’t really seem to matter.

Results suggest ‘special care should be taken to avoid extremely brief hugs’, although the researchers don’t know exactly when a hug becomes too long and awkward.

The new study could help design more friendly robots, which have been evaluated less positively after hugs that are ‘too short’, they claim. 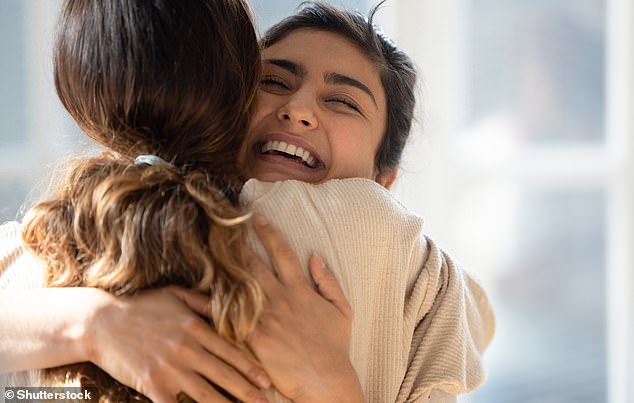 Longer hugs, between five and 10 seconds, were more pleasant than very short hugs (one second), academics at Goldsmiths, University of London found

TIPS FOR THE PERFECT HUG

– Make it last between five and 10 seconds

– It’s risky to hug for longer than 10 seconds, although further studies are needed to know exactly when hugs become ‘too long’

The study was conducted by researchers at the Department of Psychology, Goldsmiths, University of London.

‘Hugging is one of the most common types of affective touch encountered in everyday life,’ they say in their new paper.

‘However, little is known about the factors that influence hugging evaluation and behaviour.

‘Here, we aimed to assess how different hugs would be evaluated and whether they can affect mood.’

In the first experiment, 48 participants, all female, hugged an experimenter for either one, five or 10 seconds in two different hugging styles – both ‘criss-cross’ and ‘neck-waist’.

‘Criss-cross’ has one person with their arm over one shoulder of the other in a diagonal orientation, while ‘neck-waist’ has huggers with their arms over or under the shoulders of their partner, usually parallel to the floor.

Criss-cross is arguably a closer, more intimate embrace that could precede a kiss, while neck-waist is a bit more formal.

After the hug, participants then reported how ‘pleasant’, ‘arousing’ and ‘under control’ the contact felt.

A hug on your left-hand side is more heart-felt than one on the right, scientists reported in 2018.

The researchers in Germany analysed more than 2,000 embraces at an airport, in both departures and arrivals, and compared them to hugs between strangers.

The study revealed that in less emotionally-charged hugs we lean to our right, while in more intense hugs we swing to the left.

It all boils down to our brain hemispheres, they said – the right side of the brain control emotions and the left side of the body, meaning a strong emotion drives us in that direction.

Read more: How to tell if a hug is meaningful, according to science

Participants were asked about their mood immediately after each hug, and then again three minutes and six minutes after the hugs.

Results indicated that hug duration can influence hug experience – one-second hugs were rated as less pleasant and less under control than five-second and 10-second hugs.

However, arm crossing had no or only a small effect on attractiveness and arousal – suggesting where we put our arms really doesn’t matter.

This effectively rubbished the researchers’ hypothesis prior to the experiments that criss-cross hugs would be rated as more pleasant than neck-waist hugs.

In the second experiment, researchers approached 206 people on Goldsmiths campus to share a hug with the person they were socialising with.

After the hug, researchers asked the people to report emotional closeness to the other participant on a scale of zero to 100. They also made a note of each person’s arm crossing style and gender.

Interestingly, criss-cross hugs were the most common type of arm crossing style, and height difference did not significantly influence hugging style.

‘This is surprising in that a criss-cross hug between two people with height differences is rather cumbersome,’ the experts say in their paper. 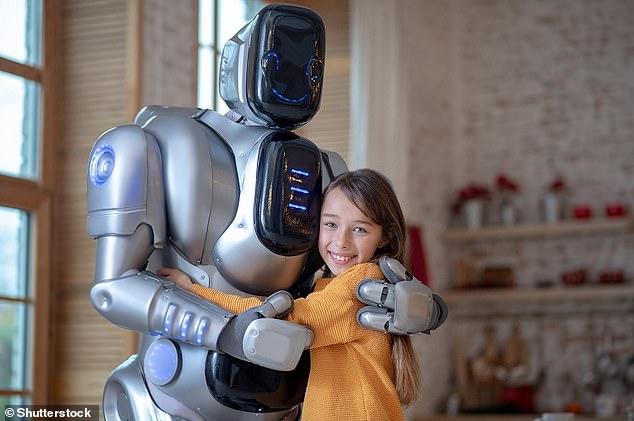 The new study could help design more friendly robots, which have been evaluated less positively after hugs that are ‘too short’ (stock image)

Criss-cross hugs were more common between men than between women or mixed pairs – possibility as a sign of respect between two males, as criss-cross hugs have previously been described as more egalitarian.

The researchers say further studies are needed to define when exactly hugs become ‘too long’, although a 2019 study involving robots suggested hugging too long might leave a good impression.

The authors, based at the University of Pennsylvania, found robots were considered ‘more social, caring, happy and comforting’ after hugs that lasted too long, compared to hugs that were too short.

‘Our findings on hug pleasure align with research indicating that robots are evaluated less positively after a ‘too short’ hug’, indicating that very short hugs are less pleasant than longer hugs,’ the Goldsmiths team say.

Their study has been published in the journal Acta Psychologica.

A hug really does make you feel better after an argument, according to a 2018 study.

Holding hands also improves a person’s mood after a conflict, and the effect lasts into the next day, the authors at Carnegie Mellon University found.

Studying 400 people, the team found those who shared a hug with the person they’d fought with were less likely to harbor negative feelings in the hours and days after.

This adds weight to other studies showing affectionate human touch has a calming effect on the nerves, they said.

Read more: A hug calms your nerves after an argument, study finds