You’re having a laugh! Dutch and Japanese people can detect if a person is from the same country as them based on the sound of their chuckles, study finds

Both Dutch and Japanese people can recognise their fellow countrymen by listening to the sound of their laughter alone, a study has concluded.

Researchers led from the University of Amsterdam recorded the sounds of different types of laughter produced by volunteers from both Japan and the Netherlands.

They then played these clips to a total of 404 Dutch and Japanese participants, who were able to tell if the laugher belonged to the same cultural group as them.

Spontaneous — rather than forced — laughter was rated as most positive by both groups, but Dutch listeners rated Dutch laughter as being the most positive of all.

The findings, the team explained, add to mounting evidence that laughter is a rich vocal signal that listeners can use to make various inferences about other people. 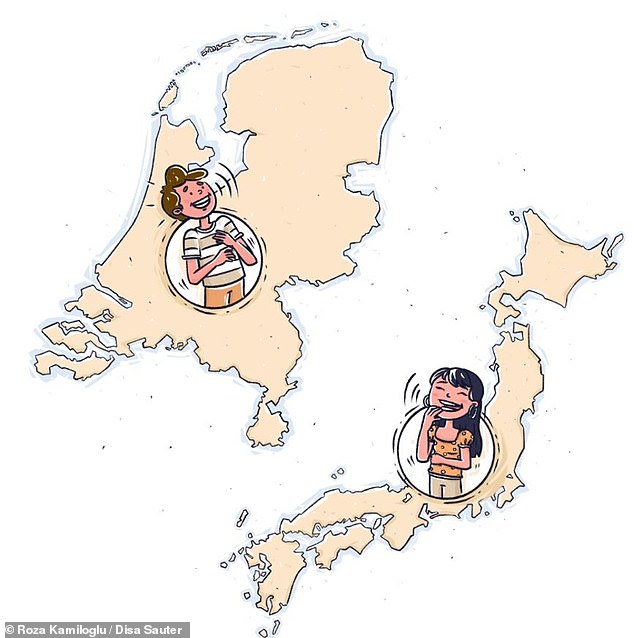 Both Dutch and Japanese people can recognise their fellow countrymen by listening to the sound of their laughter alone, a study has concluded

Research published earlier this year determined that at least 65 known animals can laugh just like humans.

Experts from California combed through past studies of animal behaviour, looking for records of vocal play signals that might represent a version of laughter.

The following animals are among those that they determined engage in play-based vocalisations:

A strong non-verbal vocalisation, laughter can be used as a signal of affiliation, reward, or cooperative intent and it can serve to strengthen social bonds.

Laughter can be divided into two types. The first, ‘spontaneous’, is an uncontrolled reaction — such as to a hilarious joke — and manifests with distinctive acoustic features that are difficult to fake.

‘Voluntary’ laughter, on the other hand, is produced by the deliberate modulation of vocal output, and results in the kind of noises you might make as a polite response to a lame joke.

As the latter is produced with greater vocal control, it can encode more information about the person laughing — and, accordingly, previous studies have shown that we can better identify speakers based on voluntary, rather than spontaneous, laughter.

Furthermore, studies have shown that we are better at deciphering such emotional expressions when they come from people from our own particular cultural group, which each having distinctive nuances that listeners can pick up on.

In their study, psychologist Roza Kamiloğlu of the University of Amsterdam and her colleagues wanted, building on these past works, to explore whether laughter type influences our ability to identify not individual people, but groups.

The researchers recruited 273 individuals from the Netherlands and 131 from Japan and played them — without context — audio clips of either spontaneous or voluntary laughter produced by fellow Dutch and Japanese individuals.

Each participant was asked to judge whether the laughter was spontaneous or voluntary, whether it was made by someone of the same cultural group and how they would rank its positivity on a seven-point scale.

Perhaps unsurprisingly, spontaneous laughter was rated as being more positive than voluntary laughter across both cultures.

However, the results indicated that in-group laughter was perceived as being more positive than out-group laughter and the Dutch — but not Japanese — listeners.

‘Our results demonstrate that listeners can detect whether a laughing person is from their own or another cultural group at better-than-chance accuracy levels based on only hearing a brief laughter segment,’ the researchers said.

‘Contrary to prediction, we found no advantage for the notion that participants would be better at identifying group membership from voluntary laughter.’

The full findings of the study were published in the journal Philosophical Transactions B.

TOP 10 JOKES THAT CONFUSE AND AMUSE IN EQUAL MEASURES

Top 10 jokes that amuse and confuse in equal measure according to British adults.

The percentages refer to the proportion of survey respondents who said they had to read them more than once to understand/before they found them funny.

3. A jar of Omega 3 vitamins fell on my head when I opened the cupboard. I sustained super fish oil injuries (40 per cent)

4. How do you milk sheep? With iPhone accessories (38 per cent)

5. How many surrealists does it take to screw in a light bulb? A fish (36 per cent)

6. What do accountants do when they’re constipated? They work it out with a pencil (35 per cent)

9. What does a dyslexic, agnostic, insomniac do at night? He stays up wondering if there really is a dog (28 per cent)