More than 300,000 people died prematurely due to air pollution across Europe in 2019, shocking report warns

Exposure to fine particulate matter air pollution led to some 307,000 people dying prematurely in Europe during 2019 — a shocking report has warned today.

Moreover, 178,000 of these deaths could have been avoided if all EU member states had reached the World Health Organization air quality guideline level of 5 µg/m³.

This is the conclusion an European Environment Agency (EEA), which analysed the impact of three key pollutants — fine particulate matter, nitrogen dioxide and ozone.

However, the report did note that air quality in Europe was better in 2019 than the previous year — part of a long-term trend driven by emissions-reduction policies.

Air pollution is a major cause of disease and death — typically from heart disease, stroke, lung disease or lung cancer — and Europe’s largest environmental health risk.

The EU’s ‘Zero Pollution Action Plan’ set a target of reducing the count of premature deaths from fine particulate matter by more than 55 per cent from 2005–2030. 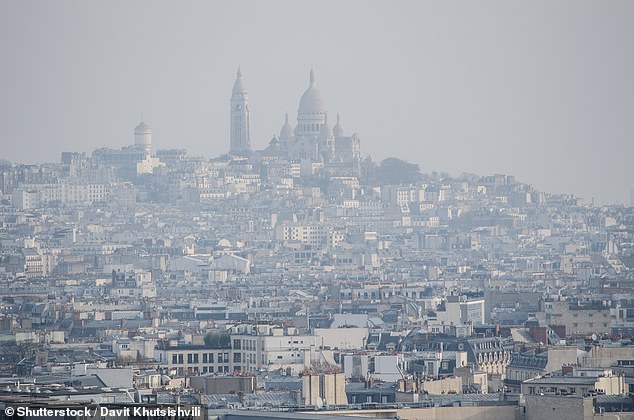 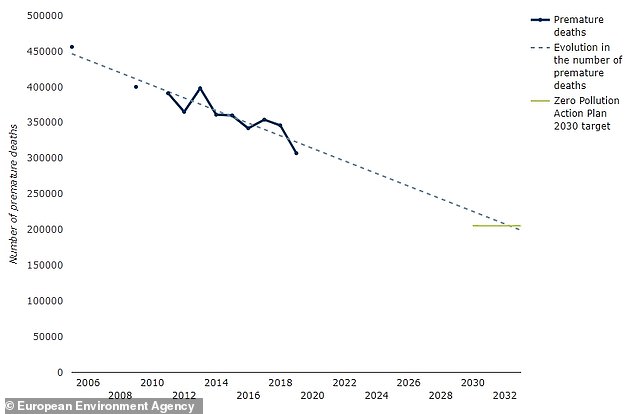 The European Union’s ‘Zero Pollution Action Plan’ set a target of reducing the count of premature deaths from fine particulate matter by more than 55 per cent from 2005–2030.

According to the EEA’s latest analysis, the EU is on track to meet this goal, with the number of deaths having already fallen by nearly a third from 2005–2019.

The plan is part of the European Green Deal, the overall aim of which is to make Europe climate neutral by 2050.

‘To breathe clean air should be a fundamental human right. It is a necessary condition for healthy and productive societies,’ said World Health Organization (WHO) regional director for Europe, Hans Kluge.

‘Even with improvements in air quality over the past years in our region, we still have a long way to go to achieve the levels in the new WHO Global Air Quality Guidelines.

‘At WHO, we welcome the work done by the EEA, showing us all the lives that could be saved if the new air quality levels were achieved, giving policy-makers solid evidence about the urgent need to tackle this health burden.’

The WHO’s new guidelines were developed in the wake of a systematic review of the best available evidence on the impacts of air pollution of human health — a review which indicated that air pollution can have detrimental effects at even lower concentrations than had previously been thought.

‘Investing in cleaner heating, mobility, agriculture and industry delivers better health, productivity and quality of life for all Europeans and especially for the most vulnerable, said EEA executive director Hans Bruyninckx.

‘These investments save lives and also help accelerate progress towards carbon neutrality and strong biodiversity.’

The report builds on data published by the EEA in September this year, which flagged that air pollution levels were still too high in 16 EU member states.

‘In central and eastern Europe, the burning of solid fuels for domestic heating and industry results in high concentrations of both fine and coarse particulate matter, as well as benzo[a]pyrene, a known carcinogen,’ the EEA noted.

Meanwhile, they added, high concentrations of nitrogen dioxide persist in larger cities as a result of road traffic, leading to asthma and other breathing problems.

In southern Europe, anthropogenic pollutants react in the heat and sunlight to produce high concentrations of ground-level ozone — which experts have warned is linked to both cardiovascular disease and irritation of the eyes, nose and throat.

However, the EEA did note that air quality improved in 2020 as a result of lockdown measures introduced to control the spread of COVID-19 — which led to a reduction in transport emissions — combined with favourable weather conditions. 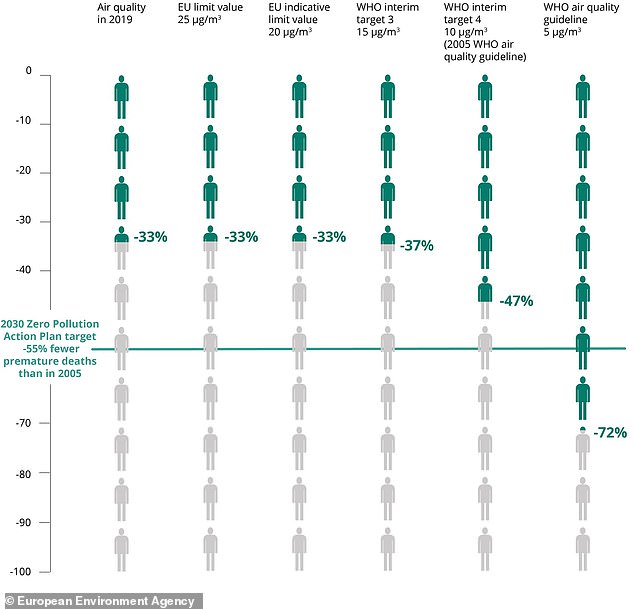 Some 178,000 these deaths in 2019 could have been avoided if all EU member states had reached the World Health Organization air quality guideline level of 5 µg/m³. Pictured: the percentage reduction on 2005 premature deaths that could be delivered by hitting various EU and WHO guideline levels across Europe. Each full person represents 10 per cent

The ‘Health impacts of air pollution in Europe’ report comes just ahead of the EU Clean Air Forum, which is to be held in Madrid, Spain, on November 18–19.

The forum will bring together an assortment of experts, decision-makers and stakeholders to reflect upon the development and realisation of effective air policies, projects and programmes on a local, national and European-wide scale.

A further objective of the meeting will be discussion around the revision of relevant EU regulations with a mind to bringing them into closer alignment with the new WHO air quality guidelines.

The full findings of the report were published on the EEA website.