Small black hole is discovered hiding in a star cluster 160,000 light years away in a breakthrough that could help solve the mystery of how these voids form and evolve

A ‘small’ black hole has been discovered in a star cluster 160,000 light years away from Earth, scientists report.

The newly-found black hole was spotted in NGC 1850, a cluster of thousands of stars roughly 160,000 light-years away in the Large Magellanic Cloud, a neighbour galaxy of the Milky Way.

Astronomers used Very Large Telescope (VLT), located in the Atacama Desert of northern Chile, to find the black hole, which, despite being described as small, is roughly 11 times the mass of our Sun.

Black holes are regions of spacetime where gravity pulls so much that even light can not get out. They act as intense sources of gravity that hoover up surrounding dust and gas. 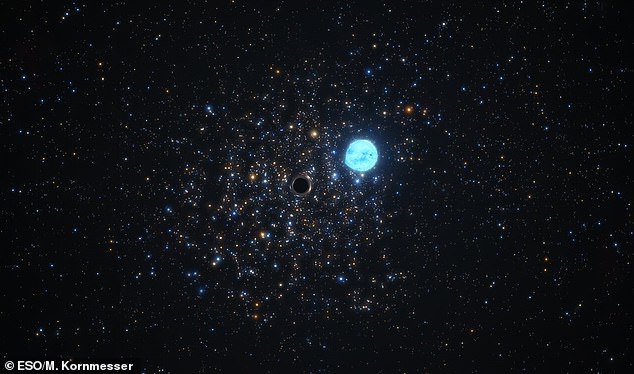 This artist’s impression shows a compact black hole 11 times as massive as the Sun and the five-solar-mass star orbiting it. The two objects are located in NGC 1850, a cluster of thousands of stars roughly 160,000 light-years away in the Large Magellanic Cloud, a Milky Way neighbour. The distortion of the star’s shape is due to the strong gravitational force exerted by the black hole. Not only does the black hole’s gravitational force distort the shape of the star, but it also influences its orbit

Black holes are so dense and their gravitational pull is so strong that no form of radiation can escape them – not even light.

They act as intense sources of gravity which hoover up dust and gas around them. Their intense gravitational pull is thought to be what stars in galaxies orbit around.

How they are formed is still poorly understood. Astronomers believe they may form when a large cloud of gas up to 100,000 times bigger than the sun, collapses into a black hole.

Many of these black hole seeds then merge to form much larger supermassive black holes, which are found at the centre of every known massive galaxy.

Alternatively, a supermassive black hole seed could come from a giant star, about 100 times the sun’s mass, that ultimately forms into a black hole after it runs out of fuel and collapses.

When these giant stars die, they also go ‘supernova’, a huge explosion that expels the matter from the outer layers of the star into deep space.

The description of the newly-found black hole as ‘small’ refers to its mass, not diameter, which can’t be measured.

At just 11 solar masses, this is barely anything compared to supermassive black holes, which range in size from 1 million to 10 billion times the mass of our Sun.

The research has been led by Dr Sara Saracino from the Astrophysics Research Institute of Liverpool John Moores University.

The team discovered the black hole by looking at how it influences the motion of a star in its close vicinity. It’s the first time this detection method has been used to reveal the presence of a black hole outside of our galaxy.

The method could be key to unveiling hidden black holes in the Milky Way and nearby galaxies, and shedding light on how they form and evolve.

‘Similar to Sherlock Holmes tracking down a criminal gang from their missteps, we are looking at every single star in this cluster with a magnifying glass in one hand trying to find some evidence for the presence of black holes but without seeing them directly,’ Dr Saracino said.

‘The result shown here represents just one of the wanted criminals, but when you have found one, you are well on your way to discovering many others, in different clusters.’

As the name suggests, star clusters are groups of hundreds to millions of stars that share a common origin, all gravitationally bound for as long as several billions of years.

Supermassive black holes are objects found at the heart of most galaxies.

They have a mass millions to billions of times the mass of the Sun and allow nothing to escape, not even light.

In the Milky Way the supermassive black hole is known as Sagittarius A*.

There is also a class of ultramassive black holes, with a mass of at least 10 billion times the mass of the son.

Even larger ones, with 100 billion times the mass of the sun have been dubbed stupendously large black holes.

The detection in NGC 1850 marks the first time a black hole has been found in a young cluster of stars. NGC 1850 is only around 100 million years old, a blink of an eye on astronomical scales.

‘We can’t say for sure it is the youngest black hole that has been ever detected as it is very difficult to date black holes detected in the field,’ Dr Saracino told MailOnline.

‘With its mass of 11 times the mass of the Sun, it is well within the range of possible masses for this type of objects. In other words, it is not extreme.’

To carry out their search of NGC 1850, the team used data collected over two years with the Multi Unit Spectroscopic Explorer (MUSE) mounted at VLT.

‘MUSE allowed us to observe very crowded areas, like the innermost regions of stellar clusters, analysing the light of every single star in the vicinity,’ said co-author Sebastian Kamann, also at Liverpool’s Astrophysics Research Institute.

‘The net result is information about thousands of stars in one shot, at least 10 times more than with any other instrument.’

Astronomers were alerted to the presence of a black hole in NGC 1850 by its gravitational influence on a star orbiting it with five times the mass of our Sun – what they call the ‘smoking gun’.

The star’s ‘peculiar motion’ signalled the presence of the black hole.

Data from the University of Warsaw’s Optical Gravitational Lensing Experiment and from the NASA/ESA Hubble Space Telescope enabled them to measure the mass of the black hole and confirm their findings. 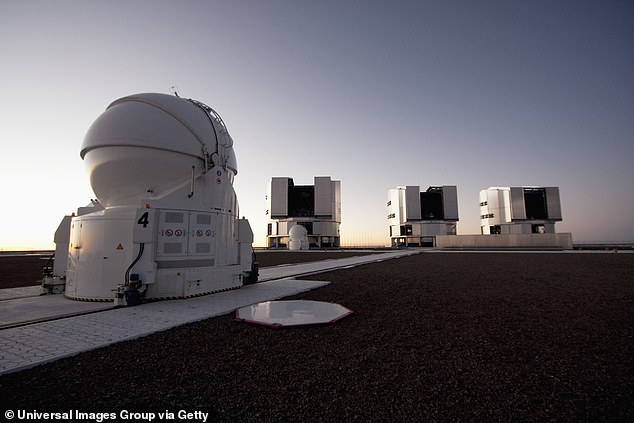 Astronomers have previously spotted such small, ‘stellar-mass’ black holes in other galaxies by picking up the X-ray glow emitted as they swallow matter, or from the gravitational waves generated as black holes collide with one another or with neutron stars – the collapsed cores of giant stars.

However, most stellar-mass black holes don’t give away their presence through X-rays or gravitational waves.

‘The vast majority can only be unveiled dynamically,’ said study co-author Stefan Dreizler at the University of Göttingen, Germany.

‘When they form a system with a star, they will affect its motion in a subtle but detectable way, so we can find them with sophisticated instruments.’

‘The ELT will definitely revolutionise this field,’ said Saracino.

‘It will allow us to observe stars considerably fainter in the same field of view, as well as to look for black holes in globular clusters located at much greater distances.’

The finding has been detailed further in a paper published in Monthly Notices of the Royal Astronomical Society.