How does YOUR pooch stack up? Vets reveal the dog breeds most affected by blood blisters of the ears – with Bull Terriers, Saint Bernards and French Bulldogs topping the list

Vets have revealed the dog breeds most affected by aural haematoma, also known as a ‘blood blister of the ear’, a painful disease that may require treatment.

The distressing canine condition consists of a pocket full of blood that develops if a blood vessel bursts inside the earflap.

One in every 400 dogs in the UK suffers from the condition each year, although fortunately it’s usually very obvious and easy to diagnose.

Symptoms include a swollen and droopy earflap that develops very suddenly, redness, head shaking, ear scratching and holding the head to one side.

Breeds that are the least at risk, meanwhile, are Greyhound, Chihuahua and Miniature Dachshund and Pomeranian. 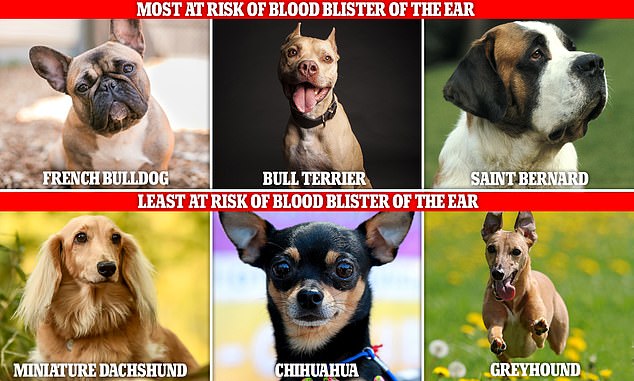 According to the RVC, dog breeds with the highest risk of aural haematoma are Bull Terrier, Saint Bernard and French Bulldog. Those with lowest risk are Greyhound, Chihuahua and Miniature Dachshund

BLOOD BLISTER OF THE EAR

An aural haematoma, also known as a ‘blood blister of the ear’, is a pocket full of blood that develops if a blood vessel bursts inside the earflap.

Symptoms include a swollen and droopy earflap that develops very suddenly, redness, head shaking, ear scratching and holding the head to one side.

It’s been though the condition results from blood vessels that burst when dogs shake their head or scratch their ear too hard.

But Royal Veterinary College (RVC) claims it’s to do with repeated folding of the ear flap.

Aural haematomas occasionally develop after an injury or knock to the ear, but this is much less common, according to People’s Dispensary for Sick Animals (PDSA).

The research was led by the Veterinary Companion Animal Surveillance System (VetCompass) – RVC’s research project that aims to investigate the range and frequency of health problems in pets.

‘Based on some prior evidence, the current study hypothesised that pendulous-eared breeds had greater odds of aural haematoma compared to breeds with other types of ear carriage,’ the authors say.

‘However, the results did not support this hypothesis – breeds with pendulous [loosely-hanging] ears had lower odds than the other types of ear carriage.

‘Conversely, breeds with V-shaped drop ears and semi-erect ears had the highest odds of aural haematoma.’

It was previously thought aural haematoma resulted from blood vessels that burst when dogs shake their head or scratch their ear too hard, but the RVC team have proposed a new theory to explain the condition’s cause.

They think repeated folding of the ear flap within certain types of ear carriages leads to chronic damage and weakness along this fold line.

This damage eventually triggers a bleeding episode into the ear flap, according to RVC.

The college’s study included an overall population of 905,554 dogs under veterinary care in 2016 at 887 veterinary clinics in the UK.

After following the clinical records of the dogs for a one-year period, the researchers identified that 0.25 per cent (2,249 dogs) were affected by the disease.

Crossbreeds were used as the baseline (the point of comparison) in order to work out the risk of getting the disease for each breed, although they were not at lowest risk.

‘Crossbreds are the most common breed type – around 20 per cent of dogs – so statistically they are a reliable group to use as the baseline,’ study author Dr Dan O’Neill at RVC told MailOnline.

‘There is also a widespread perception that crossbreds are somehow healthier than most purebreds so these results allow owners of pure breeds to compare their breed against the crossbred.’

In all, 14 breeds showed an increased risk of ear aural haematoma compared with crossbred dogs. 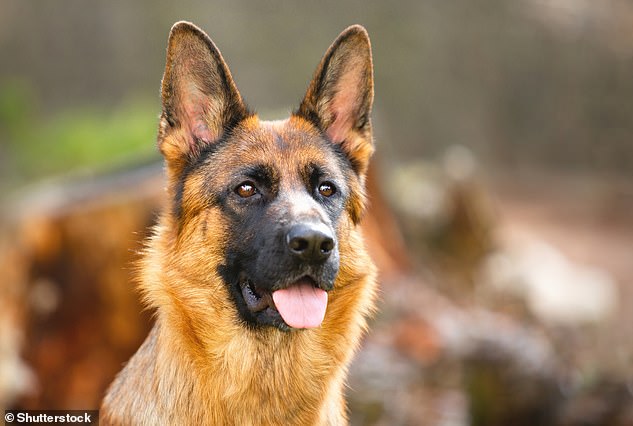 The Basset Hound, pictured here, is a breed with ‘pendulous’ ears – those that hang loosely. Dog breeds with pendulous ears had lower odds than the other types of ear carriage

DOGS AT MOST AND LEAST RISK OF AURAL HAEMATOMA

Conversely, breeds with loose-hanging ear carriage had a x0.6 reduced risk. Meanwhile, purebred dogs were not at greater risk than crossbred dogs.

‘Even though there were lots of individual breeds with higher risk than crossbreds, there were also lots of breeds with reduced risk,’ Dr O’Neill said.

‘So the story here is that it is breed itself (and especially the ear carriage of the breed) that largely defines the risk, and not whether a dog is purebred or crossbred.’ 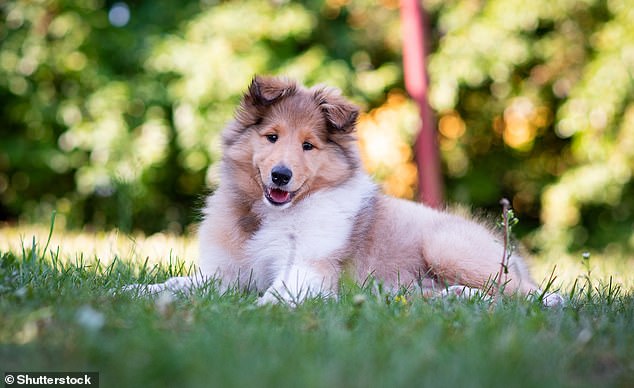 The researchers also identified other factors that increased the risk of the condition – age and body weight.

Meanwhile, dogs aged 10 to 12 years were at the greatest risk of ear aural haematoma (x5.6) compared with dogs under one year.

RVC said the study will be key for helping owners recognise the problem and seek appropriate veterinary care faster.

The study has been published in Nature Scientific Reports.

RVC REVEALS THE DOG BREEDS MOST AT RISK OF OBESITY

From a sample of more than 20,000 dogs, pugs, beagles and golden retrievers were the breeds at greatest risk of obesity compared with crossbreeds, the study found.

Owners of these breeds must be ‘especially vigilant’ to protect their dogs from piling on weight, RVC says, by avoiding excessive treats and giving them lots of exercise. 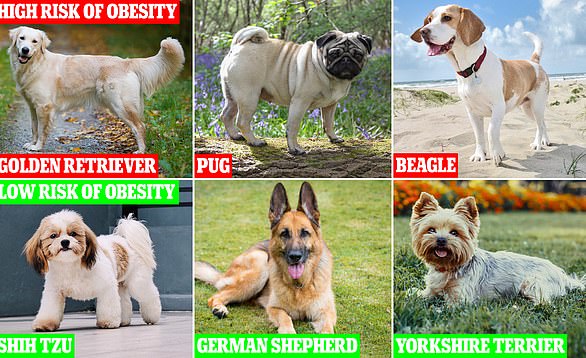 The three breeds at highest risk of obesity are pug, beagle and golden retriever (top) while the lowest risk breeds are shih tzu, German shepherd and Yorkshire terrier (bottom)

Crossbreeds were the largest group in the study and were so used as the baseline (the point of comparison for the pure breeds), although they were not at lowest risk.

There is currently no universally‐accepted definition of obesity in dogs, with the terms ‘overweight’ and ‘obesity’ often used interchangeably.

This is different from humans, who are classed as underweight, healthy, overweight or obese based on their body mass index (BMI).