Worried your dog is lonely? DON’T get a second pooch! Pups get worse separation anxiety when left alone with another animal, study finds

With many of us finally back in the office following months of Covid-19 lockdown, you may be worried that your dog is lonely at home on their own.

While you might be tempted to buy a second pooch to keep your dog company, a new study suggests that this could actually do more harm than good.

Academics in Switzerland fitted dog-owning homes with cameras to monitor canine behaviour when their owners were away.

They found that barking – an indicator of separation anxiety – was more common in multi-dog households compared to single-dog households.

Physical activity – another potential indicator that can lead to destructive behaviour – was also higher in multi-dog households, primarily in the first hour of separation.

Signs of separation anxiety in dogs include barking, howling, digging and scratching, disruptive chewing and urination or defecation, even with house-trained dogs. 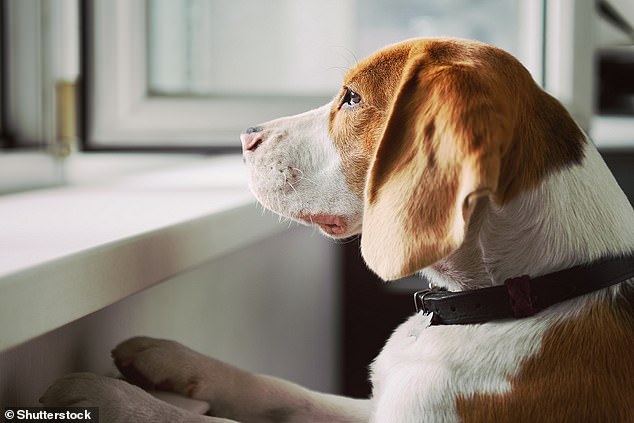 Separation anxiety is the feeling of panic when an animal is separated from a family member. Signs of separation anxiety in dogs include barking, howling, digging and scratching, disruptive chewing and urination or defecation – even in house-trained dogs

WHAT IS SEPARATION ANXIETY?

Separation anxiety is triggered when dogs become upset because of separation from their guardians, the people they’re attached to.

Escape attempts by dogs with separation anxiety are often extreme and can result in self-injury and household destruction, especially around exit points like windows and doors.

Veterinary specialist Dr Joanna Woodnutt MRCVS says: ‘Separation anxiety is the feeling of panic when an animal is separated from an important “resource” – usually a family member.

‘It was an evolutionary advantage to stick together in a pack or group, so the feeling of fear when alone was useful to the canine ancestor. The problem is, in modern-day living we need our dogs to be relaxed when left alone for short periods.

‘This often isn’t the case, and signs of separation anxiety include howling and whining when left alone, or panicking when you go to leave the house. Bad cases will see your dog pacing back and forth, and destructive behaviour such as chewing.’

The new study has been led by researchers at the Academy for Animal Naturopathy in Dürnten, Switzerland.

‘Many dogs are left alone at home by their owners for several hours on a daily basis,’ they said. ‘This practice is known to be a possible source of complication in dog keeping.

‘Behaviourists and veterinarians are frequently consulted due to excessive vocalisations, destructive behaviour and house-soiling of dogs left alone by their owners.

‘These observations are thought to be symptoms of a disorder which most authors refer to as separation anxiety or separation related behaviour.

‘Since dogs under single-dog conditions show more resting and less vocalisations, we could not support the view that familiar conspecifics could facilitate coping with separation stress.’

Owners were instructed to align the cameras to the places where the dogs would most probably stay during separation (like the exit-door and the sofa), before leaving their dog (or dogs) alone.

Most dogs showed low vocal and physical activity, independent of the amount of time being alone at home.

For 22 per cent of the filming time, dogs showed some minor activity, including lying with raised head, sitting or standing around.

Only during 1.9 per cent of the time they showed activities like walking or running around.

But there was no destructive behaviour – like ripping furniture – on show, nor soiling, and lengthy vocal activity was ‘very rare’.

However, there were significant differences found between the single dog and multi-dog conditions.

Physical activity was higher in multi-dog households, primarily in the first hour of separation. 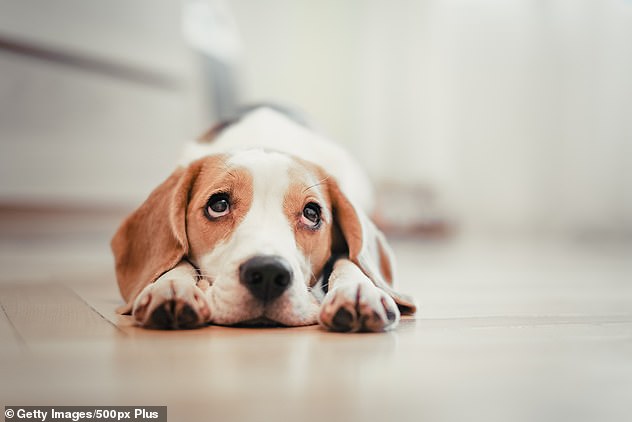 Escape attempts by dogs with separation anxiety are often extreme and can result in self-injury and household destruction, especially around exit points like windows and doors (stock image)

Dogs purchased as puppies since March 2020 – when the Covid lockdown started in the UK – have only ever known what it’s like to have their family around them at all times.

The sudden change as owners to commute to the office again could trigger separation anxiety.

‘This could come as a shock and lead to more stressed out pets and behaviour issues if the signs aren’t spotted early and handled correctly,’ said Claire Haynes, animal behaviourist at Blue Cross.

‘In the most serious cases, stress could lead to unwanted behaviours, such as aggression and health problems.’

Stephan did admit that canine company may help dogs cope with separation from human attachment figures in individual cases.

But generally, the study challenges a common belief that dogs are ‘not that alone’ if they’re home with other dogs of the same breed, he said.

‘It’s a common misconception – and often given as poor advice – that a dog with separation-related anxiety will fare better and show fewer stress responses if another dog is added to the household,’ added Natalie Waran at Eastern Institute of Technology in New Zealand, who wasn’t involved in the study.

‘This doesn’t address the underlying problem for the dog with separation anxiety, and it often results in another dog showing anxious or excitable behaviour.

‘The key is to understand the causes of problem behaviour to be able to manage or treat those effectively.’

The research team also investigated the effects of sex and neuter status – factors that are thought to have an influence on the onset of separation anxiety.

After looking at the difference between the sexes, male dogs in multi-dog households showed higher vocal activity.

A further sex related difference was that male dogs were more prone to stay at the exit-door.

Females showed a decrease in this behaviour the longer the owner was away, whereas male dogs showed an increase. No significant effects of neuter status were detected.

‘Our data suggest rather the opposite,’ they conclude in their paper, published in the journal Applied Animal Behaviour Science.

DOGS WILL SUFFER ‘EXTREME SEPARATION ANXIETY’ DUE TO LOCKDOWN BEING LIFTED

The Queen’s corgi trainer has claimed dogs will experience ‘severe separation anxiety’ due to lockdown being lifted after pampered pooches have become used to having their owners at home.

Dr Roger Mugford, an animal psychologist used by the royal family, said that owners need to start preparing their pets for the return to a normal routine to avoid any issues.

Speaking to The Times, the specialist from Chertsey, Surrey explained that while people are working from home, dogs can build up a ‘huge reservoir’ of over-dependency’ which could see them suffer at a later date.

‘When left alone, dogs can chew the house, annoy the neighbours by constantly barking, urinate and defecate inside, sometimes even self harm.

‘Put a webcam on your dog and you’ll see howling and pacing and other distress signs,’ he said.

He advises owners to have 30 minutes breaks away from their pets several times a day in order to ease them into being alone when the lockdown ends.

Anxiety in humans has risen during the coronavirus pandemic, which has taken more than 16,000 lives in the UK and infected more than 125,000 people.

Many have relied on their pets for emotional support, Dr Mugford explained.

He said pets will see a ‘huge shock’ when the lockdown is lifted, and they need short structured training sessions in the meantime.

The trainer has been a helping hand to the royal family for years, and in 2002 helped to train Princess Anne’s dog Dotty after it bit two children in Windsor Great Park.

He has also visited Windsor Castle to help the Queen control her corgis and dorgis, which are Daschund-corgi crosses.

Dr Mugford, who also trains the dogs of celebrities and rockstars, was called in to help when the monarch had eight or nine dogs, and ‘quite dangerous’ fights were breaking out between them.

The trainer helped to solve that particular issue, but said the Queen is an ‘amazing dog owner and trainer’, adding that she could have easily done his job in her younger days.

‘She’s quite methodical and uses rule-based procedures,’ he said.