Bill Gates warns the world is likely to MISS its 2.7°F climate change target, but praises the UK for its ‘exemplary’ use of green innovations

Microsoft co-founder Bill Gates thinks the world is likely to miss the 2.7°F (1.5°C) climate change target, as set out in the aims of the Paris Agreement.

Gates, who was speaking to former UK Health Secretary Jeremy Hunt during COP26 in Glasgow, said that ‘there’s no comparable feat that mankind has ever achieved’.

Hitting the target – limiting the global temperature increase to 2.7°F (1.5°C) above pre-industrial levels – is seen as key to averting a planetary catastrophe, leading to devastation in the form of frequent climate disasters and millions of deaths.

However, Gates did have praise for the UK for its ‘exemplary’ use of green innovations, including off-shore wind farms, saying the country has a ‘very good grade on climate change’.

Superyachts emit 7,020 tons of carbon dioxide per year, or 19 tons per day, making the billionaire entrepreneurs the target of hypocrisy accusations. 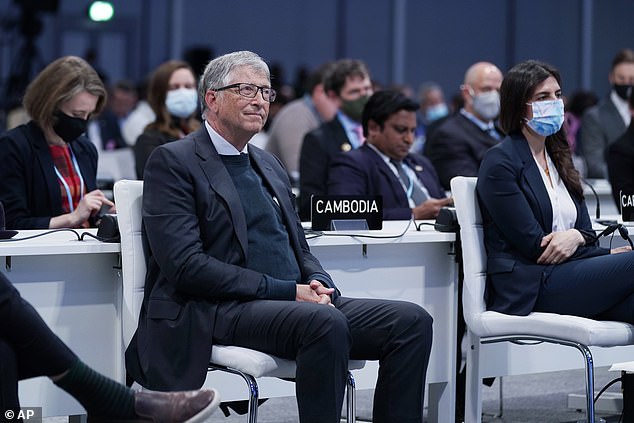 WHAT IS THE PARIS AGREEMENT?

It seems the more ambitious goal of restricting global warming to 1.5°C (2.7°F) may be more important than ever, according to research that claims 25 per cent of the world could see a significant increase in drier conditions.

‘There’s no comparable feat that mankind has ever achieved to what we need to do for climate change,’ the former Microsoft CEO said in the interview for Policy Exchange with Hunt on Tuesday.

‘[Hitting] 1.5°C will be very difficult. I doubt that we’ll be able to achieve that.’

But Gates called for ‘rapid innovation’ in green technologies if these ambitious targets are going to be hit.

This includes bringing down the costs of current green technologies, like solar panels and lithium-ion batteries, to enable mass roll outs in middle-income countries like China and India.

‘What happened with solar panels where they were very expensive, and now they’re cheap, or lithium-ion batteries,’ said Gates, formerly the richest person in the world.

Amazon tycoon Jeff Bezos has been accused of hypocrisy after telling COP26 that going to space made him realise ‘how thin the globe’s atmosphere is’.

The billionaire has been criticised by Prince William among others for the amount of fossil fuel that space exploration consumes.

Bezos earlier this year made a short journey to space in the first crewed flight of his rocket ship, New Shepard.

He told delegates: ‘Looking back at earth from up there, the atmosphere seems so thin. The world so finite and so fragile. Now in this critical year, and what we all know is the decisive decade, we must all stand together to protect our world.’

Nadia Whittome, Labour MP for Nottingham East, was among Mr Bezos’s critics today, calling him a ‘hypocrite’ and writing: ‘Amazon has a carbon footprint larger than most countries.’

‘We need to do that for about six other technologies – green steel, cheap hydrogen, offshore wind.

‘It does require lots of money … we have many paths of innovation, we’re not just counting on one path. But we will have to see rapid innovation.

‘Now, mankind is much richer today, far more knowledgeable today. We do have the digital tools that enable us to work on these things.’

Gates – who founded Microsoft with the late Paul Allen in 1975 – pointed out that emissions in the world come from middle-income countries.

High income countries, such as the UK, the US and Australia, therefore have to work to reduce the cost of green products – what Gates calls a ‘green premium’.

‘We cannot afford to subsidise the green premiums to the middle-income countries,’ Gates told Hunt. ‘That would be trillions of dollars.’

Gates picked out the UK as a country that has helped ‘bootstrap’ some new green technologies, such as offshore wind farms.

Wind power is a sustainable source of energy and has a smaller impact on the environment than burning fossil fuels.

‘Wind is going to play a big role in that that much larger power generation network of the future, on a global basis,’ Gates said.

Also on day three of COP26, Gates was seen mingling with world leaders including the Prime Minister of India at a ‘clean technology’ event.

He was later pictured with Prince Charles and Canada’s Prime Minister Justin Trudeau during a reception inside Glasgow’s Scottish Event Campus (SEC).

Offshore wind farms tend to be more efficient than those on land, as stronger winds cause the turbines to spin faster, meaning they generate more energy 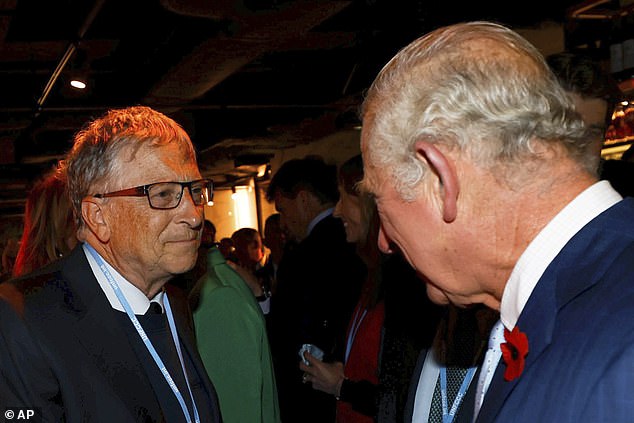 Prince Charles, right, speaks with Gates as he co-hosts a reception for world leaders during the COP26 summit, in Glasgow, Scotland, Tuesday, November 2, 2021 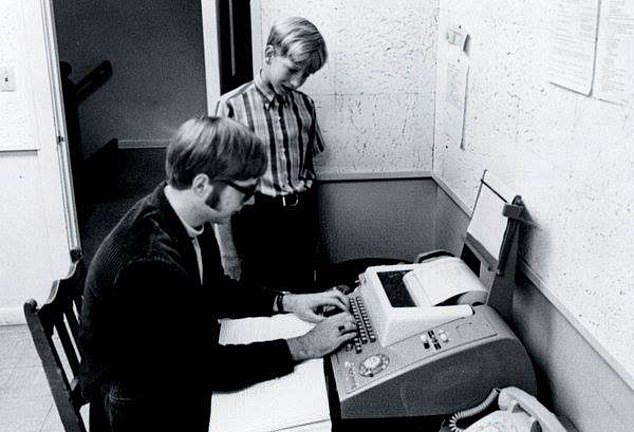 Bill Gates watches his friend and future Microsoft co-founder Paul Allen typing on teletype terminal at the Lakeside school in 1968. He was about 13 in this picture

Gates is currently ranked fourth on the list of richest people in the world – behind Bezos, SpaceX founder Elon Musk and French businessman Bernard Arnault.

Gates founded Microsoft with Allen after the two met at high school in Seattle in 1968. Both dropped out of university to found the company.

According to Allen’s memoir, he and Gates shared a passion for computers and used to go dumpster diving for print-outs of computer programme code.

Bill Gates and Jeff Bezos were slammed as hypocrites for lecturing the world on the need to combat climate change by reducing carbon footprint while at the same time reportedly vacationing on superyachts off the coast of Turkey.

Multi-billionaire and Microsoft founder Gates celebrated his 66th birthday in Turkey in the company of fellow tycoon and Amazon founder Bezos on Friday.

Bezos was among the 50 guests invited to Gates’ private party beside the Mediterranean. It’s not clear whether any of Gates’ family helped him celebrate at his exclusive bash.

Gates – once the richest man on earth who has dropped to fourth on the Forbes Rich List ranking with $124 billion – transported his guests by helicopter from his $2million-a-week rental yacht ‘Lana’ to the Sea Me Beach club in Fethiye.

According to reports, Bezos also traveled to Gates’ superyacht by helicopter.

The Blue Origin founder is said to have made the 120-mile round trip journey by chopper from Govoka to the resort town of Fethiye.

Based on the same estimations, Bezos’ helicopter emitted some 215 pounds of carbon dioxide into the atmosphere.

Both Bezos and Gates are reportedly staying on superyachts – each of which emits 7,020 tons of carbon dioxide per year, or 19 tons per day.