Saudi Arabia starts construction on its $100 billion eco-city that will have NO STREETS and be ready for residents in 2024: 105-mile-long ‘linear’ paradise will have no cars and no carbon emissions

Despite its ranking as the world’s top oil exporter, Saudi Arabia has started work on a futuristic desert city that will be free of cars and roads and be powered by 100 percent clean energy, with residents expected to move in as early as 2024.

Crown Prince Mohammed bin Salman first announced plans for The Line, a 105-mile long series of urban areas along a central ‘spine,’ back in January in a televised address.

Now bulldozers have finally started moving earth and tunneling through mountains to install the linear city’s three layers: a surface region for pedestrians, plus two subterranean layers for transport and infrastructure.

‘It’s a huge undertaking,’ the project’s chief executive, Nadhmi Al-Nasr, told Bloomberg, estimating that ‘not even one percent’ of the work needed to plan and build The Line is done.

Rather than constructing from one starting point and building out, Al-Nasr added that developers are considering ‘starting from two points’ and building toward the center. 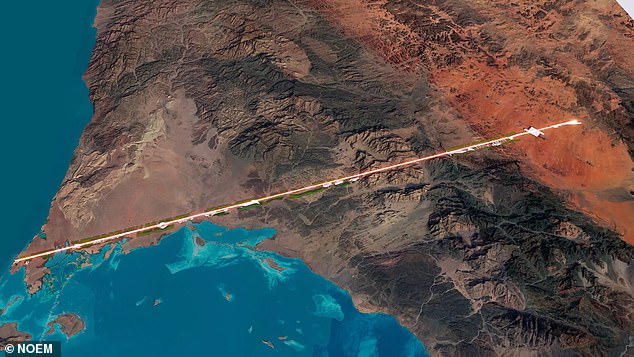 Home to a million residents, The Line will rely on ultra-high-speed’ and autonomous transit options, alleviating the need for cars and capping commutes at 20 minutes

Stretching from the mountains of northwest Saudi Arabia to the Red Sea, The Line’s clusters of aggregated communities will house up to 1 million people in total, connected by ultra-high-speed transit and ‘autonomous mobility solutions,’ according to a release from the start of the year.

Schools, restaurants, shops and other destinations would all be within a five-minute walk and ‘no journey will be longer than 20 minutes.’

‘Why should we sacrifice nature for the sake of development?’ Bin Salman said in January. 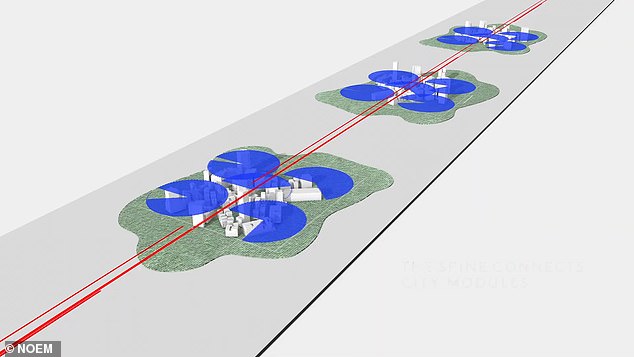 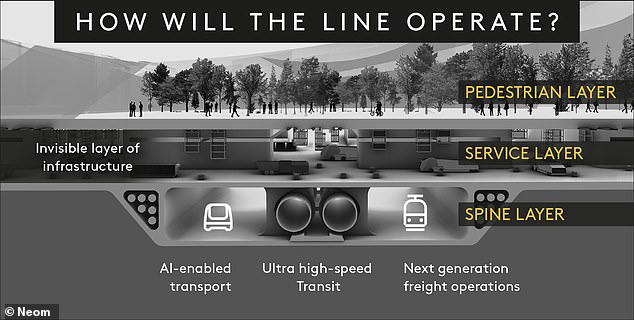 Concept art: Initial diagrams of the new eco-city,dubbed ‘The Line’ show a three-layered infrastructure, including a transport level controlled by AI, a services level, and and an above-ground pedestrian level

The Line is envisioned as the first part of Neom, a planned $500 billion city-state that would cover 10,000 square miles of Saudi Arabia’s Tabuk province, near its borders with Jordan and Egypt.

Neom is a combination of the Greek word neos, or ‘new,’ and mustaqbal, Arabic for ‘future.’

It’s part of an ambitious plan to wean Saudi Arabia off oil dependency and transform the country into a tech hub like Silicon Valley, while also incorporating towns, research centers, education zones, and tourist attractions. 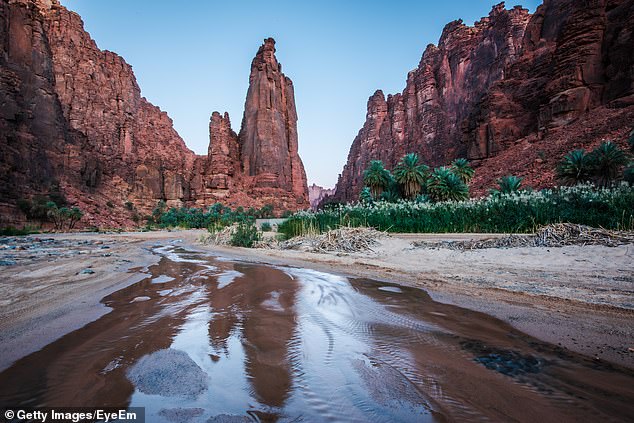 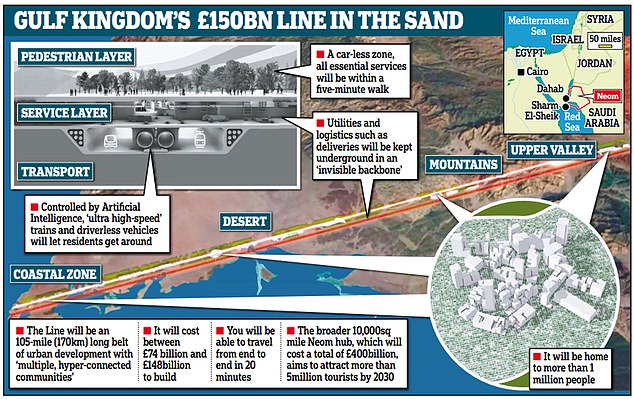 The Line is envisioned as the first part of Neom , a planned $500 billion high-tech city-state that would cover 10,000 square miles of Saudi Arabia’s Tabuk province 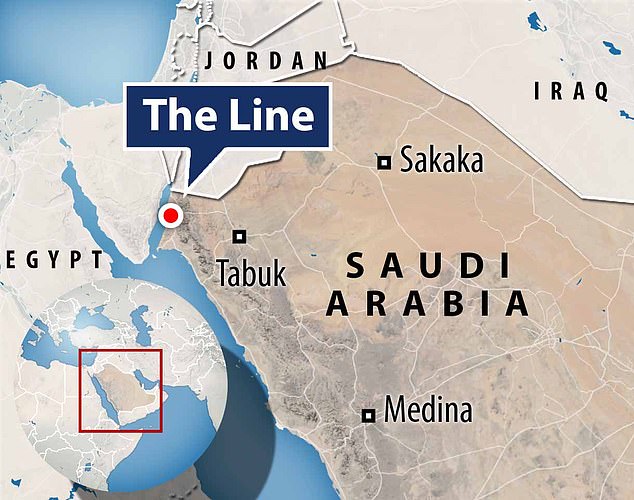 Construction has started on The Line, which will stretch across 105 miles in northwest Saudi Arabia from the Tabuk province to the Red Sea

‘Neom is an accelerator of human progress and a vision of what a new future might look like,’ according to a release from January.

‘It will be a destination and a home for people who dream big and want to be part of building a new model for exceptional livability, creating thriving businesses, and reinventing environmental conservation.’

Plans include flying drone taxis, a Jurassic Park–style amusement park with robotic dinosaurs, and the highest density of Michelin-starred restaurants in the world, according to The Wall Street Journal. 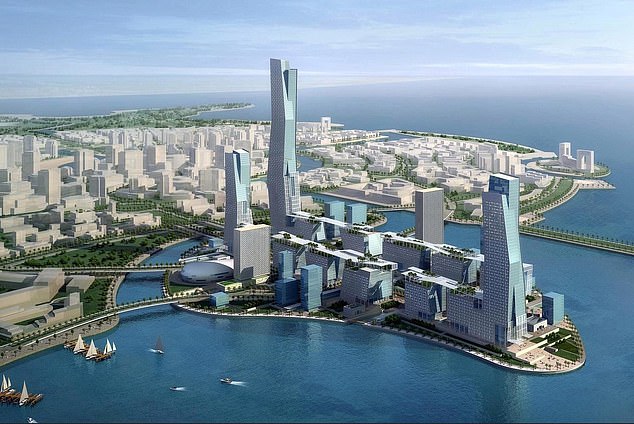 The region’s stark landscape would be transformed by cloud-seeding machines, the world’s largest coral garden, glow-in-the-dark sand, and a giant artificial moon that lights up nightly.

He added that 1,500 Neom employees are already working and living on site. 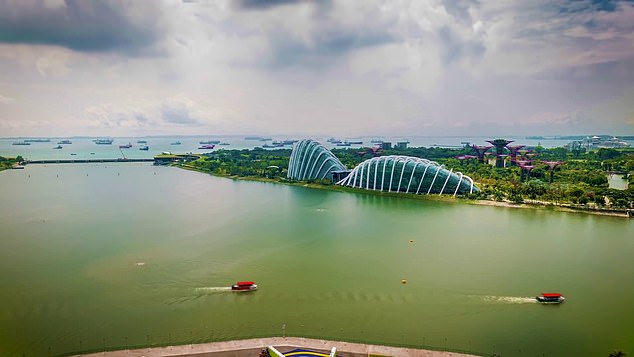 Neom will rely on wind farms, solar power, and cutting-edge technology that transforms water into oxygen and hydrogen for fuel

Touted as the planet’s largest carbon-free system, the 16-borough metropolis would rely on wind farms, solar power, and cutting-edge technology that transforms water into oxygen and hydrogen for fuel.

But Neom’s developers faced some obstacles in the beginning, Al-Nasr told Bloomberg, as engineers tried to design a city around tech that don’t exist yet.

Construction was originally reported to start in the first quarter of 2021.

Now that it’s finally underway, the next step for Neom is to get the city-state declared a ‘free zone’ with different laws than the rest of Saudi Arabia.

According to Al-Nasr, that may be accomplished as early as the first few months of 2022.