Barn owls have human-like neurons that allow them to make mental maps of their surroundings while flying, researchers say

Barn owls have the same special neurons — ‘place cells’ — that let humans make mental maps of their surroundings and these may aid their navigation while flying.

This is the conclusion of a study led by researchers at the Israel Institute of Technology, who recorded the birds’ brain activity as they flew back-and-forth.

Place cells are known to exist not only in humans, but also other mammals like rodents and bats. They have also been detected in tufted titmice as they walk.

However, this is the first time that evidence for place cells — which fire at a high rate when an animal visits a particular location — has ever been seen in birds in flight.

According to the team, the fact that place cells are seen in both mammals and non-mammals suggests that they likely evolved millions of years ago. 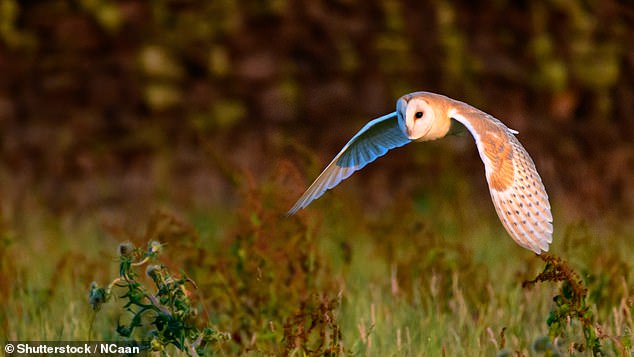 Barn owls have the same special neurons — ‘place cells’ — that let humans make mental maps of their surroundings and these may aid their navigation while flying. Pictured: a barn owl

The study was undertaken by neuroethologist Arpit Agarwal of the Israel Institute of Technology and colleagues.

‘In the barn owl — a central place forager that strongly relies on memory to navigate to strategic standing posts and to its roost at night — we found robust place cell representation,’ the team wrote in their paper.

In their experiments, the researchers used an array of high-speed, infra-red cameras to film six barn owls (Tyto alba) as they flew back-and-forth between two perches.

During each flight, the team recorded the owls’ brain activity using a tiny wireless electrophysiology sensor implanted into each bird’s head.

They found that certain neurons in the owls’ hippocampus fired more strongly at specific points along their flight path — and depending on what direction they were going in. This is similar to how place cells have been seen to work in rodents.

The neuronal activity was found to be unaffected by the lighting conditions in the testing room or the movement of the experimenters.

However, the team caution that there could be other explanations for the brain activity they recorded — such as cells that fire after a certain time in the air.

Similar cells have also been detected in rodents that are triggered at certain points in time after the animals begin an action.

University College London neuroscientist Kate Jeffrey told the New Scientist that the team’s evidence for the presence of place cells in owls was ‘fairly convincing’.

Such, she added, is ‘consistent with emerging findings from other labs that many of the phenomena we have been studying in mammals have counterparts in non-mammals, suggesting an ancient evolutionary origin, more than 300 million years.’

For Professor Jeffrey, the next logical step — if logistically more challenging, she notes — would be to confirm the existence of place cells in fish.

A pre-print of the researchers’ article, which has not yet been peer-reviewed, can be read on the bioRxiv repository.

Although the RSPB recommends not interfering with fledglings, the charity said there are circumstances when Britons should come to the birds aid.

If the baby bird is on a busy road or path, the RSPB advises picking the bird up and moving it a short distance to a safe place such as a dense shrubbery.

This must be within hearing distance of where it was found. UK birds have a poor sense of smell and won’t abandon their young if they are touched.

If a cat or dog is spotted eyeing up a fledgling, then you are advised to keep your domestic pet indoors for a few days – or at least around dawn and dusk.

If a baby bird is discovered on the ground without feathers or covered in fluff, then it is a nestling that has likely fallen from its nest before it is ready.

These youngsters can sometimes be put back in their nests, but the RSPB says you should only attempt this if you are 100 per cent sure you have found its home and it is safe to do this.

It’s also important to remember that sometimes adult birds eject their chicks if they sense an underlying health problem, or if it is dying.

If you find a fallen swift it should be placed in a shoebox and kept away from noise and other disturbances. You can give it water by running a wet cotton bud around the edge of its beak.

These animals are hard to care for, so the RSPB recommends contacting a swift carer. They are listed here.

Some people may also come across barn owl chicks, which normally leave nests before they can fly.

The RSPB states that Owlets in this case do need help, as those on the ground will be ignored by their parents. They recommend gently placing it back into the nest.

Owls have a poor sense of smell and won’t reject a baby because it was handled by humans. You can check whether it is healthy at this website.