Mark Zuckerberg says changing the name of his company from Facebook to Meta is all about recognising a shift in its priorities, from social media to the metaverse, which it sees as the future of the internet. But it’s hard not to notice the odd timing of the announcement.

Facebook has, essentially, never stopped being under intense legal, social and regulatory scrutiny for at least the past five years. It has seen scandal after scandal drag its name through the mud — the latest a series of leaks showing just how disorganised internal attempts to address harassment and misinformation have been — against a constant undertow of shady data collection practices.

And Facebook’s worries go beyond just the current and ongoing controversies. Newly leaked internal documents have shown the company is concerned about its ageing userbase; with Facebook as a platform failing to attract the valuable younger demographics, the service risks going extinct. Making a Facebook account mandatory for new devices such as Oculus Quest and Portal, far from encouraging a wider range of people to sign up, has chased the growing number of Facebook-wary consumers away from those products.

This pivot is bound to be seen by many as an attempt to escape a sinking ship. And yet, Meta is clearly very serious about the refocus in its priorities. It’s invested more than $US10 billion ($13.3 billion) into metaverse technology like its software platform Horizon, and a 2022 headset that can offer VR and augmented reality experiences, tracking users’ faces and eye movement to allow for more natural interaction and communication.

The company knows that in a metaverse context it won’t be a sole gatekeeper to social experiences and advertising eyeballs, like it has been with Facebook. The metaverse will be made of open standards, like the current web, and so Meta hopes to be a key facilitator in the hardware and software that powers the shared space and the business conducted there.

“We want to start with helping creators have a presence, including businesses but also including graphic artists, photographers, fashion designers. A lot of these experiences are going to get a lot richer,” Mr Cox said.

“When you think about an Instagram profile from the fashion designer right now, it’s a grid on a phone. You can imagine, [in the metaverse] that being an experience of walking into a gallery. We want to make it really easy for anybody out there who’s a business or a creator to have a storefront or a presence, for free.”

The company is also investing in NFT technologies, anticipating the creation and sale of entirely virtual goods within the metaverse.

As Meta, the company does distance itself from its troubled main service, and will give users a way to hold an account without needing to be on Facebook at all. But even if trying to ditch a tarnished name is part of that strategy, it’s not the entire impetus behind it. 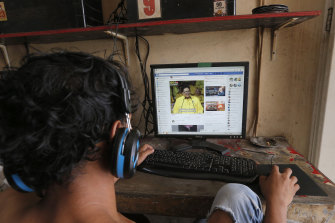 Facebook is increasingly concerned about losing the younger demographic.Credit:AP

Facebook, the service, is old-fashioned, and Meta likely needs to set itself up for a future where it disappears. By investing in a social virtual world powered by nascent technology like AR and NFTs, it hopes to place itself where the kids of today will be in a few years, rather than where their parents were in 2007.

Meta’s path ahead will not be a smooth one. Rights advocates and regulators are unlikely to let the company forget about its impacts on democratic processes, or its role in the dissemination of hateful content and misinformation.

And the burgeoning metaverse itself is likely to face a lot of resistance from regulators and law-makers, not to mention users and advertisers that are less than satisfied with the way Facebook has operated.