Forget the iPad! Rare Apple VIDEOPAD prototype that was scrapped by Steve Jobs in 1997 is set to be auctioned — and is predicted to sell for up to $12,000

The plastic personal digital assistant mock-up — the only one of its kind known to have survived — shows how Apple once envisaged cornering the video call market.

Three VideoPad concepts were developed by the California-based firm from 1993–1995 based on outline sketches drawn up by Apple’s former CEO, John Sculley.

However, the design was never realised into a commercial product, and the project was scrapped in 1997 when Apple founder Steve Jobs returned to the firm.

Unlike the VideoPad 1 and 3, the second design — which sports a folding screen and camera for video conferencing — was never officially shown to the public.

According to the auction house, Bonham’s, the prototype was originally purchased from an Apple Engineer in Palo Alto, California, back in 1995. 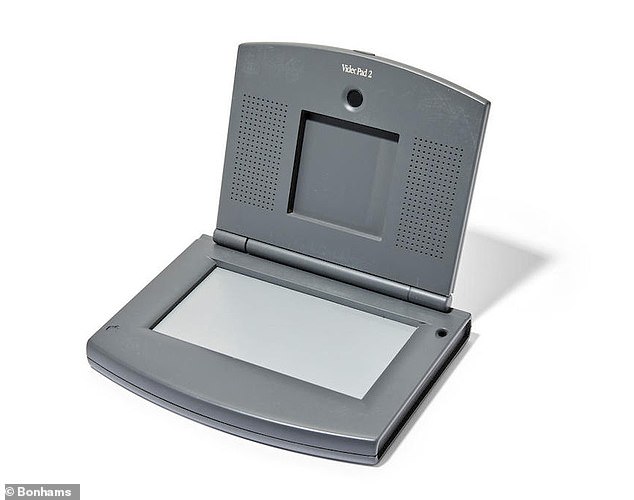 The VideoPad concept was Apple’s attempt to follow up on its previous personal digital assistant, the Newton MessagePad.

However, it was never really a commercial success for the company, and the MessagePad and it’s ‘Newton OS’ operating system were also shelved by Mr Jobs after his return to Apple.

Had it been realised, the VideoPad would have furthered the MessagePad concept with the addition of a camera and a video screen built into its hinged flip-top.

It comes in its original black leather carry-case, which was debossed with the Newton light bulb logo.

Mr Jobs is reported to have axed the VideoPad programme after concluding that the necessary technology to ensure a positive user experience was not yet available.

It would be another 10 years before Apple properly arrived on the phone market — and five more before the launch of the iPad, which is arguably the aborted VideoPad’s spiritual successor. 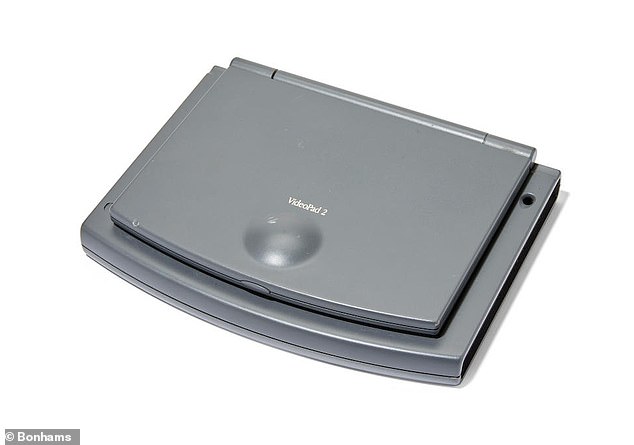 Three VideoPad concepts were developed by the California-based firm from 1993–1995 based on outline sketches drawn up by Apple’s former CEO, John Sculley. Unlike the VideoPad 1 and 3, the second design — which sports a folding screen (pictured above) and camera for video conferencing — was never officially shown to the public 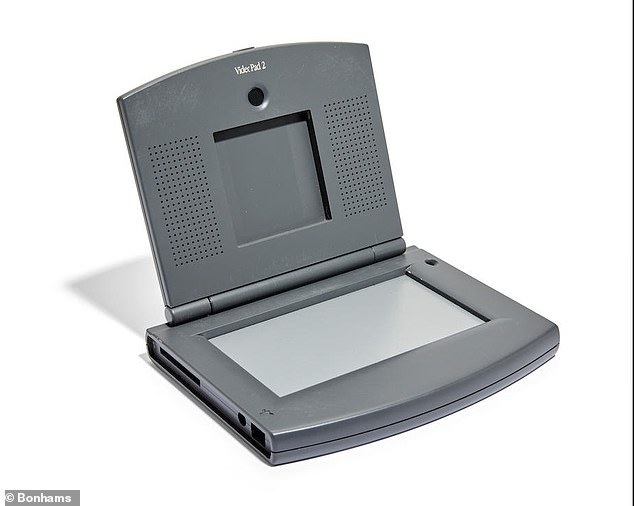 The VideoPad 2 is not the only piece of Apple history to be sold at the auction.

On the tech side, the original Apple II Personal Computer will also be auctioned off, alongside prototypes for the Apple Macintosh, Apple EMate 300 digital assistant and the first generation iPad.

The items will go under the hammer at Bonham’s History of Science and Technology auction on November 3, 2021.

THE TRILLION DOLLAR RISE OF APPLE

The company’s journey to the summit of the technology industry has been a rocky one, having seen Jobs (pictured right in 1976) leave the firm in the mid-1980s after his pet project, the first Macintosh computer, struggled and he attempted to oust then chief executive John Sculley. Wozniak is pictured left

1976: Founders Steve Jobs, Steve Wozniak and Ronald Wayne created the company on April 1 1976 as they set about selling computer kits to hobbyists, each of which was built by Wozniak.

The first product was the Apple I.

1977: Apple released the Apple II in June, which was the first PC made for the mass market.

1984: The Macintosh was introduced during an ad break for the Super Bowl and later officially unveiled during a launch event. It was discontinued a year later and Jobs left the firm.

1997: Apple announces it will acquire NeXT software in a $400 million deal that involves Jobs returning to Apple as interim CEO. He officially took the role in 2000.

The then Chief Executive Officer of Apple, Steve Jobs, with the iPhone

2011: Jobs resigned in 2011 due to illness, handing the CEO title to Tim Cook. Job died in October from pancreatic cancer.

2014: Apple unveiled the Apple Watch. It also unveiled its first larger iPhones – the 6 and 6 Plus.

2015: After purchasing Beats from Dr Dre, Apple launched Apple Music to compete with Spotify and other music streaming services.

2016: Apple returned to its roots and announced the 4-inch iPhone SE. Meanwhile, the firm is embroiled in a legal battle with the FBI, involving the agency demanding access to the locked phone used by Syed Farook, who died in a shootout after carrying out a deadly December attack in San Bernardino, California with his wife. The court order was dropped on March 28 after the FBI said a third party was able to unlock the device.

2017: Apple introduces the iPhone X, which removes the home button to make way for a futuristic edge-to-edge screen design and a new FaceID system that uses advanced sensors and lasers to unlock phones with just the owner’s face.

2018: In a first for the company, Apple introduces new features in its latest operating system, iOS 12, that encourage users to manage and spend less time on their devices. The move was spawned by a strongly worded letter from shareholders that urged the firm to address the growing problem of smartphone addiction among kids and teenagers.

2019: In January, Apple reports its first decline in revenues and profits in a decade. CEO Tim Cook partly blamed steep declines in revenue from China.

2020: In March, Apple closes all its bricks and mortar retail stores outside of China in response to coronavirus.