Nearly 2,500 pre-Hispanic structures and 80 burial sites with skeletal remains that are thousands of years old are discovered along the controversial ‘Maya Train’ route in Mexico

New pre-Hispanic discoveries have been uncovered along Mexico’s controversial ‘Mayan Train’ route that will connect will connect the states of Yucatan, Quintana Roo, Campeche, Chiapas and Tabasco.

The artifacts range in age, with the oldest dating back to the Middle Preclassic period that started in 700 B.C. and the latest finds come from the Classic Late era – some 1,400 years ago.

Archaeologists, however, did not say whether any of the remains were disturbed or destroyed by the train project, which in some places, runs alongside existing rail lines.

The Maya Train has been opposed by many residents, as the route is to be built through the rainforest located throughout the Yucatan Peninsula. 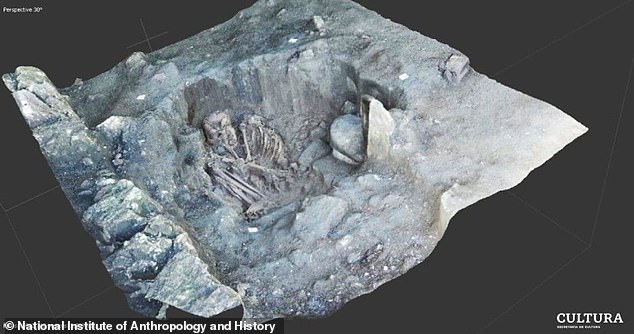 The Maya Train, or Tren Maya in Spanish, is designed specifically to shuttle tourists to popular destinations across the Yucatán Peninsula.

Mexico’s President Andrés Manuel López Obrador is pushing for the project that began in 2018, with the hopes of service starting in 2024.

However, the project has not won the hearts of residents who see it destroying the environment and sacred archaeological sites.

The sites were found on the first 140-mile stretch of the total 950-mile train line, which will run in a loop around Yucatan. 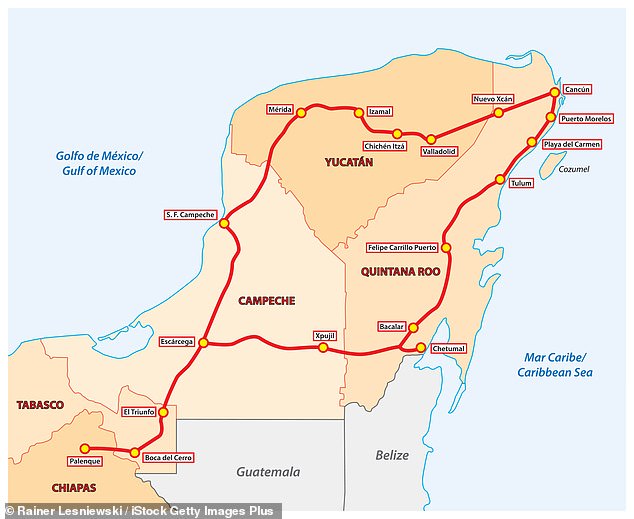 The Maya Train, or Tren Maya in Spanish, is designed specifically to shuttle tourists to popular destinations across the Yucatán Peninsula. It has been opposed by many residents, as the route is to be built through the rainforest.

That first stretch runs from the Mayan ruins of Palenque to the highway crossroad at Escarcega.

Archaeologists say they found offering bowls and spout vessels that date back to the Preclassic (1000 B.C.–4 00 B.C.), to the Classic period that began around 25 A.D.

The spout vessels are believed to have carried precious liquids for the Mayans such as chocolate.

The first four stages of the train project run through areas that were probably intensely occupied by the Mayas, who formed a sprawling empire of city-states across the Yucatan and Central America between 2000 B.C. and 900 A.D. – and their descendants still live on the peninsula.

The fifth and sixth stretches run along the resort-studded Caribbean coast. But the seventh and final stretch that runs near the jungle ruin site of Calakmul may also yield high numbers of finds.

No immediate reports were available on how many artifacts had been found on the other stretches of the project so far.

The train is intended to connect Caribbean beach resorts to the peninsula’s interior, with largely indigenous populations and ruin sites, in a bid to stimulate economic development around its 15 stations.

The government says it will cost as much as $6.8 billion, but others say it will be much more.

Critics say López Obrador rammed through the project without adequate study of its effects on the environment, underground sinkhole caves known as cenotes, and ruin sites.

Some stretches of the route already have tracks, and the institute said some artefacts had already been disturbed by railway construction decades ago.

But other stretches are to push through sensitive jungle terrain, though they will parallel existing roads or transmission lines. Even where an old railway line exists, the project would imply updating tracks and building new stations.

Some Mayan communities have filed court challenges against the project, arguing it will cause environmental damage. They also say they were not adequately consulted about it or they will not share in its benefits.

THE MAYA: A POPULATION NOTED FOR ITS WRITTEN LANGUAGE, AGRICULTURAL AND CALENDARS

The Maya civilisation thrived in Central America for nearly 3,000 years, reaching its height between AD 250 to 900.

Noted for the only fully developed written language of the pre-Columbian Americas, the Mayas also had highly advanced art and architecture as well as mathematical and astronomical systems.

During that time, the ancient people built incredible cities using advanced machinery and gained an understanding of astronomy, as well as developing advanced agricultural methods and accurate calendars.

The Maya believed the cosmos shaped their everyday lives and they used astrological cycles to tell when to plant crops and set their calendars.

This has led to theories that the Maya may have chosen to locate their cities in line with the stars.

It is already known that the pyramid at Chichen Itza was built according to the sun’s location during the spring and autumn equinoxes.

When the sun sets on these two days, the pyramid casts a shadow on itself that aligns with a carving of the head of the Mayan serpent god.

The shadow makes the serpent’s body so that as the sun sets, the terrifying god appears to slide towards the earth.

Maya influence can be detected from Honduras, Guatemala, and western El Salvador to as far away as central Mexico, more than 1,000km from the Maya area.

They maintain a distinctive set of traditions and beliefs that are the result of the merger of pre-Columbian and post-Conquest ideas and cultures.