Forget the moon buggy! Incredible MOTORCYCLE concept could allow future astronauts to cruise across the lunar surface at 10mph

It has been 50 years since NASA first put a buggy on the moon, with Apollo 15 commander Dave Scott and his fellow astronaut Jim Irwin spending three hours traversing the lunar surface in July 1971.

But with plans afoot to return to the moon later this decade — including sending the first woman to walk on the lunar surface — what will be the next method of transport humans use on Earth’s only natural satellite?

One company thinks it may have the answer after unveiling a motorcycle concept that could allow future astronauts to cruise across other worlds at 10mph (15km/h).

Dubbed the ‘Tardigrade’ — after the microscopic ‘water bear’ animals that can survive in the extreme conditions of space — the electric vehicle was brought to life by Nico von Hookie, of the German motor design company Hookie.

New wheels: A motorcycle concept that could allow future astronauts to cruise across the moon at 10mph (15km/h) has been unveiled by the German motor design company Hookie 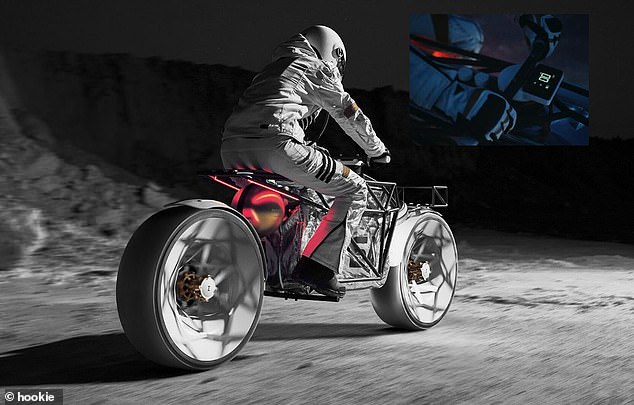 Dubbed the ‘Tardigrade’ after the microscopic ‘water bear’ animals that can survive in the extreme conditions of space, the electric vehicle was brought to life by Nico von Hookie

LUNAR MOTORCYCLE v THE MOON BUGGY: HOW THE TWO COMPARE 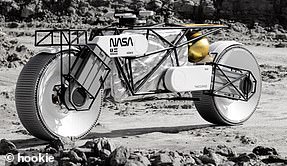 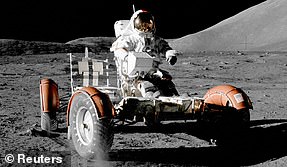 It features changeable airless carbon tyres mounted to an aluminium cage, that would allow ‘the space crew to challenge any obstacle’, the designers say, while riders would also be able to carry various types of equipment with them.

The bike runs on electricity and has a battery range of almost 70 miles (110km).

It can also be easily disassembled, with the front end able to be taken off in two minutes for space-saving.

The motorcycle began life as a sketch by Russian designer Andrew Fabishevskiy, before it caught Hookie’s attention.

It won’t actually make it to the moon, but is instead heading for the Petersen Automotive Museum in Los Angeles.

However, it offers a glimpse of how a NASA motorcycle could look on the lunar surface.

The German-based designers said: ‘With the realisation of this completely fantastic space vehicle, we want to dare a thought experiment that also raises questions about our future: what would life beyond planetary boundaries look like? 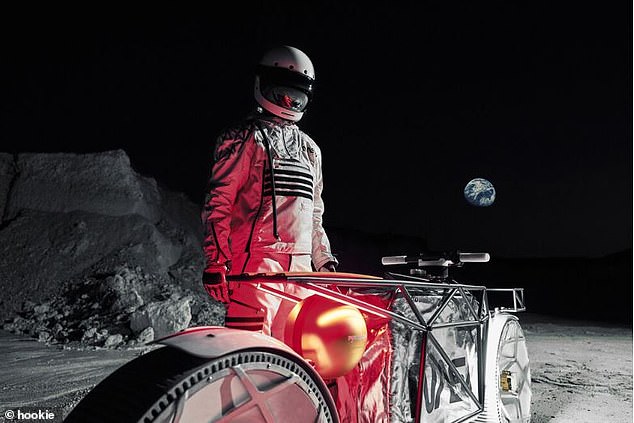 The motorcycle began life as a sketch by Russian designer Andrew Fabishevskiy, before it caught Hookie’s attention

‘What demands does outer space make on a bike that can travel in the darkness of space and largely from the shackles of gravity over icy lunar dust?

‘And how far away are we from such scenarios?

‘It is a symbol for the disentanglement of the mind. And for empowerment. The entire project ignores borders — those of countries, continents, role stereotypes and the status quo.’

The motorcycle is being displayed in the ADV:Overland exhibition at the Petersen Automotive Museum in Los Angeles, California.

NASA has chosen her to personify its path back to the moon, which will see astronauts return to the lunar surface by 2024 –  including the first woman and the next man.