Elon Musk may be the richest man in the world, but he’s losing traction in the world of electronic vehicles: A new report indicates less than two-thirds (63 percent) of all EVs registered in the US in the first eight months of 2021 were Teslas.

According to Experian’s Automotive Market Trends Review, there were 105,445 Model Y autos registered between January and the end of August, followed by 80,681 Model 3s.

The first non-Tesla EV on the list is the Chevy Bolt, in a distant third with 22,799 registrations. But that’s an increase from 8.3 percent to 9.6 percent of the EV market year-over-year.

Less than two-thirds (63 percent) of all electronic vehicles registered in the US in the first eight months of 2021 were Teslas, down from 80 percent last year. Pictured: A Tesla Model y

Electric vehicles are still less than one percent (0.43) of all cars on the road — with hybrids another two percent — but they’re making major inroads: Experian indicated 2.4 percent of all new registrations from January to June were EVs, a leap of more than 117 percent from 2020.

Model Ys made up more than half of that growth, Experian said.

In early October, Tesla upped prices for its Model 3 and Model Y in the U.S. by another $2,000, the seventh time the models have seen a price jump this year alone. 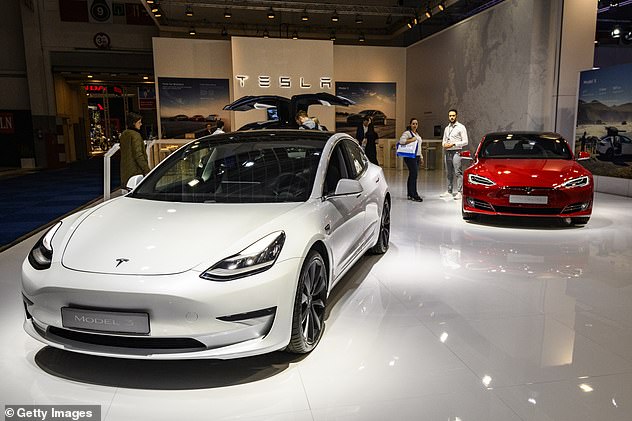 There were 105,445 Model Y autos (pictured) registered between January and the end of August, followed by 80,681 Model 3 cars 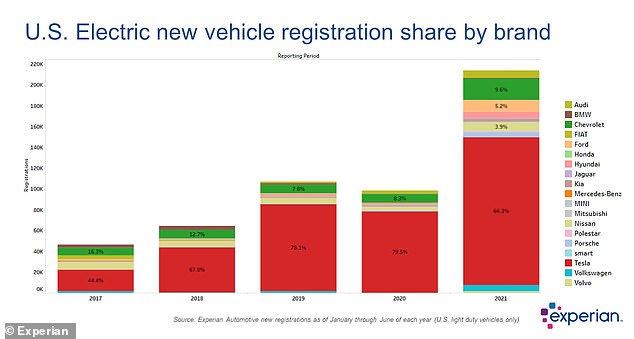 Tesla still dominates the EV market, but its share is dwindling: Experian cites gains from the Chevy Bolt, which grew to 9.6 percent of the market, along with Ford’s lineup (5.2), the Nissan Leaf (3.9) and the Audi e-tron (3.3 percent)

Industry experts speculate the hike is due to the global chip shortage expected to linger until 2023.

Now the cheapest Model 3 is the Standard Range Plus, which has a base price of $41,990, and the lowest-priced Model Y is the Long Range Dual Motor, which starts at $54,990.

Although the Elon Musk-led carmaker has been affected by the chip shortage, it still delivered 241,300 cars worldwide from July through September, more than any other electric car maker.

Ninety-six percent of sales came from newer Model 3 sedans and Model Y crossovers, according to Tesla.

The company shipped 64 percent more vehicles than it did in the same period last year.

The price increases mean Tesla’s $39,000 Cybertruck is the company’s cheapest vehicle, even though production isn’t even set to begin until 2022.

Experian’s report also indicated California was the state with the most registered electric vehicles, with 36 percent of the total share, followed by Florida with 7.5 percent and Texas with 5.4.