The rivers and tributaries on Saturn’s moon Titan could help NASA’s upcoming mission to the celestial satellite learn more about its geology and whether it’s capable of supporting life, a new study suggests.

Astronomers, led by those at Cornell University, looked at Titan’s map of rivers and tributaries and determined that the shapes of the rivers can give additional information on how deep they are or what occurred in the region.

They also found that the images they used to study Titan likely underestimated the drainage density, which could show how they operate on the distant moon. 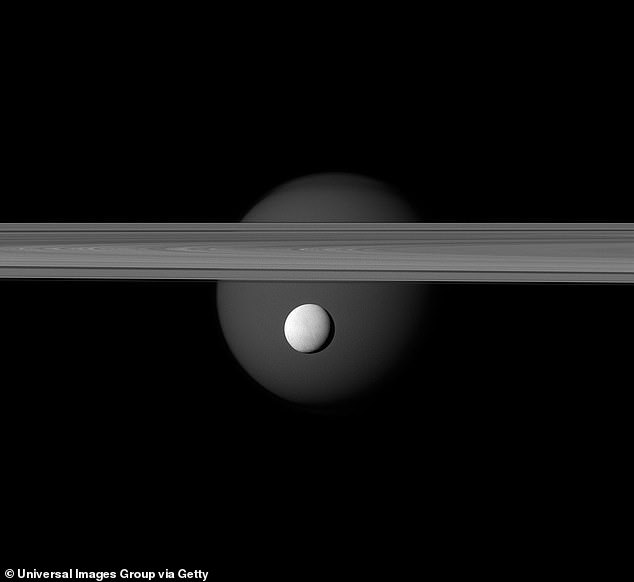 ‘The channel systems are the heart of Titan’s sediment transport pathways,’ said study co-author Alex Hayes in a statement.

‘They tell you how organic material is routed around Titan’s surface, and identifies locations where the material might be concentrated near tectonic or perhaps even cryovolcanic features.’

In 2018, scientists found evidence of a 4,000-mile-wide ‘ice corridor’ on Titan could be evidence of ancient volcanic activity.

Given that Titan is the only place in the solar system known to have liquids (aside from Earth) on the surface, understand how the rivers work is important to understand its sediment transport system and the moon’s geology.

‘Further, those materials either can be sent down into Titan’s liquid water interior ocean, or alternatively, mixed with liquid water that gets transported up to the surface,’ Hayes added. 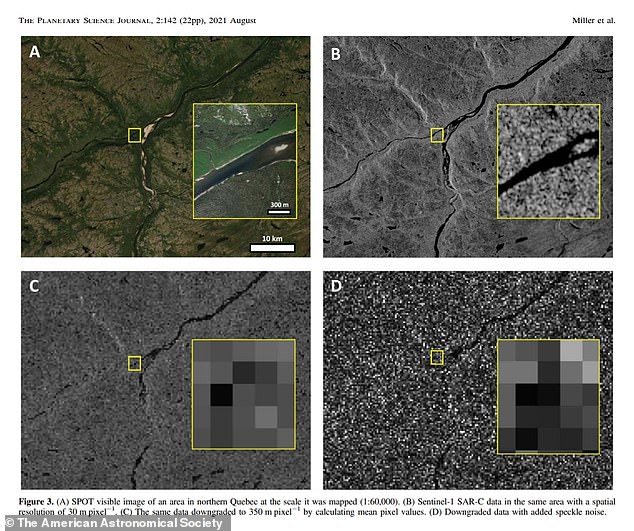 The researchers studied Titan’s rivers by looking at Earth-based radar images of rivers in places like Alaska, Quebec and other parts of the planet and comparing them to radar images that NASA’s Cassini spacecraft took of the moon 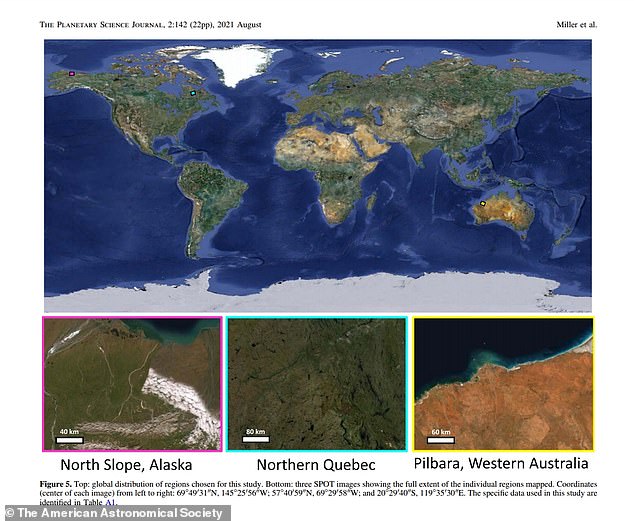 The researchers studied Titan’s rivers by looking at Earth-based radar images of rivers in places like Alaska, Quebec and Pilbara, Western Australia

The researchers studied Titan’s rivers by looking at Earth-based radar images of rivers in places like Alaska, Quebec and Pilbara, Western Australia.

They compared them to radar images that NASA’s Cassini spacecraft took of the moon, before it intentionally plunged itself into Saturn in September 2017.

In doing so, they were able to understand the limits of Cassini’s dataset and what will likely need more studying ahead of the Dragonfly expedition.

‘They can still be used to understand Titan’s landscape at a fundamental level.’

Titan is well known to have a Martian-like landscape, as scientists mapped the icy moon in 2019 (using data from the Cassini spacecraft), revealing a landscape full of mountains, lakes, plains, craters, valleys and ‘labyrinth terrains.’

Unlike Earth, Titan’s liquids are in methane and ethane form and not water.

The methane lakes can reach more than 300 feet deep on some parts of Titan, particularly in the northern polar region.

However, Titan, the second largest moon in the solar system behind Ganymede, is well-known to have a thick crust made of water ice.

Getting a further understanding of Titan’s hydrologic system can give astronomers insight into how it differs from Earth’s.

‘Examining Titan’s hydrologic system represents an extreme example comparable to Earth’s hydrologic system—and it’s the only instance where we can actively see how a planetary landscape evolves in the absence of vegetation,’ Hayes added. 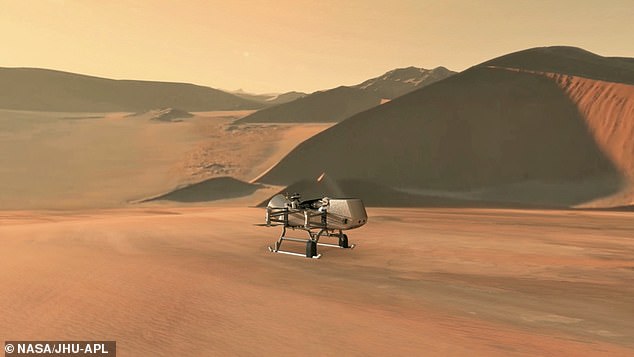 Dragonfly (pictured) was originally set to launch in 2026, but the COVID-19 pandemic pushed back the launch date to 2027

Dragonfly was originally set to launch in 2026, but the COVID-19 pandemic pushed back the launch date to 2027.

The study was published in the Planetary Science Journal.

WHAT DID CASSINI DISCOVER DURING ITS 20-YEAR MISSION TO SATURN?

An artist’s impression of the Cassini spacecraft studying Saturn

In 2000 it spent six months studying Jupiter before reaching Saturn in 2004.

In that time, it discovered six more moons around Saturn, three-dimensional structures towering above Saturn’s rings, and a giant storm that raged across the planet for nearly a year.

On 13 December 2004 it made its first flyby of Saturn’s moons Titan and Dione.

On 24 December it released the European Space Agency-built Huygens probe on Saturn’s moon Titan to study its atmosphere and surface composition.

There it discovered eerie hydrocarbon lakes made from ethane and methane.

In 2008, Cassini completed its primary mission to explore the Saturn system and began its mission extension (the Cassini Equinox Mission).

In 2010 it began its second mission (Cassini Solstice Mission) which lasted until it exploded in Saturn’s atmosphere.

In December of the following year it tracked the transit of Venus to test the feasibility of observing planets outside our solar system.

In March 2013 Cassini made the last flyby of Saturn’s moon Rhea and measured its internal structure and gravitational pull.

Cassini didn’t just study Saturn – it also captured incredible views of its many moons. In the image above, Saturn’s moon Enceladus can be seen drifting before the rings and the tiny moon Pandora. It was captured on Nov. 1, 2009, with the entire scene is backlit by the Sun

In July of that year Cassini captured a black-lit Saturn to examine the rings in fine detail and also captured an image of Earth.

In April of this year it completed its closest flyby of Titan and started its Grande Finale orbit which finished on September 15.

‘The mission has changed the way we think of where life may have developed beyond our Earth,’ said Andrew Coates, head of the Planetary Science Group at Mullard Space Science Laboratory at University College London.

‘As well as Mars, outer planet moons like Enceladus, Europa and even Titan are now top contenders for life elsewhere,’ he added. ‘We’ve completely rewritten the textbooks about Saturn.’