This is the moment a huge, 600lb leatherback turtle was returned to the sea after becoming stranded.

The creature, weighing the same as four adult men, was rescued from a mudflat in Provincetown, Massachusetts by dozens of volunteers.

According to Bob Prescott, director emeritus of the Mass Audubon Wellfleet Bay Wildlife Sanctuary, the creature had become stuck in the Herring River and needed to be relocated back to the ocean.

‘We wanted to keep it off the oysters and keep it from stranding somewhere we couldn’t rescue it,’ Prescott told the Boston Globe. ‘If it got away, there was no telling where it would strand next.’

The animal was taken to a local aquarium where it was examined by staff, who determined it was healthy. They fitted it with an identification tag that will help the experts track its health for the next month. 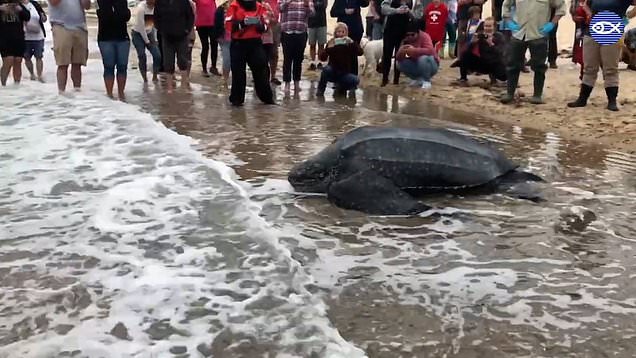 Then it was taken back to the Atlantic and released to a slew of onlookers.

Leatherback sea turtles are the largest of all living turtles.

They are listed as ‘vulnerable’ by the International Union for Conservation of Nature due to its decreasing population caused by extensive egg collecting and accidentally being caught in fishing gears.