Meet the Big 42: Astronomers snap incredible images of some of the biggest space rocks in the asteroid belt – including the almost perfectly-symmetrical Ceres and the unusual ‘dog-bone’-shaped Kleopatra

Astronomers have captured images of the 42 largest objects in the asteroid belt between Mars and Jupiter, including some with unusual shapes and structures.

Using the European Southern Observatory’s Very Large Telescope (ESO’s VLT) in Chile, the team captured the sharpest ever images of the large group of space rocks.

They set on 42 asteroids as that is the answer to the ultimate question of ‘life, the universe and everything’ in the Hitchhikers Guide to the Galaxy by Douglas Adams, which was released 42 years ago today.

The observations reveal a wide range of peculiar shapes, from the almost perfectly symmetrical Ceres, through to the dog bone-shaped Kleopatra and its moons.

The team behind the new study, led by Laboratoire d’Astrophysique de Marseille in France, say it is helping astronomers trace the origins of solar system asteroids. 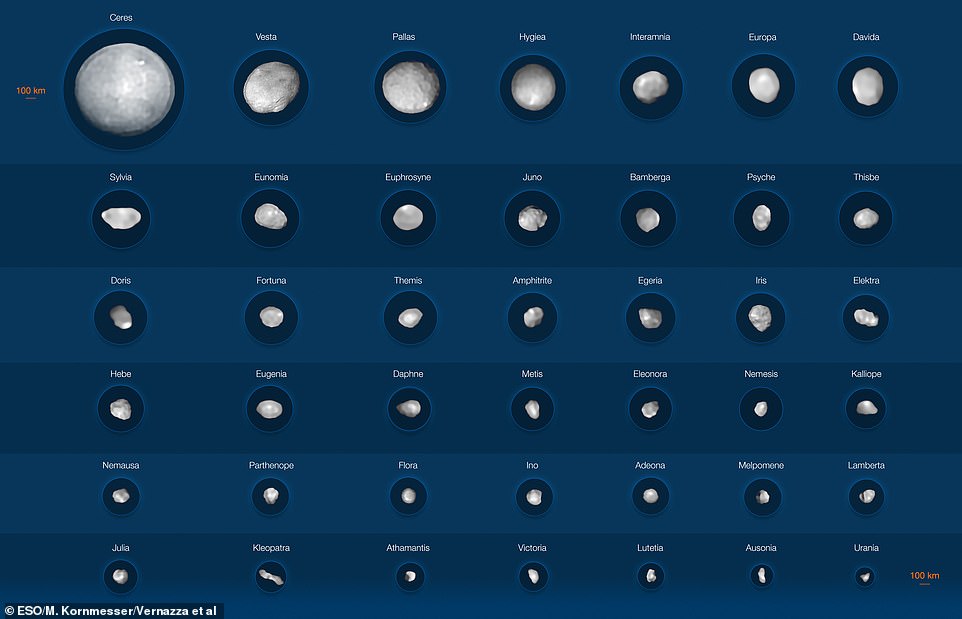 This image depicts 42 of the largest objects in the asteroid belt located between Mars and Jupiter. Most of them are larger than 60 miles in diameter 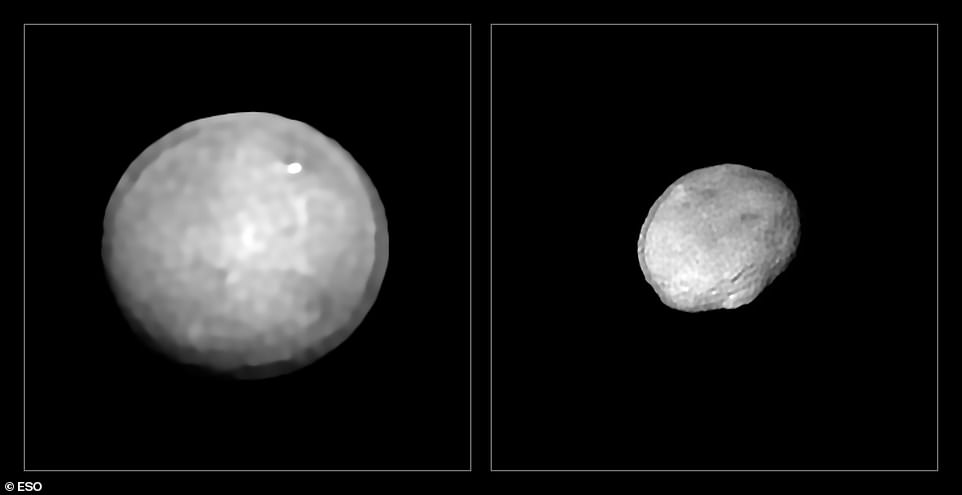 Ceres (left) and Vesta (right), are the two largest objects in the asteroid belt between Mars and Jupiter, approximately 586 and 323 miles (940 and 520 km) in diameter

Two families of objects in the asteroid belt

After taking images of dozens of objects in the asteroid belt, between Mars and Jupiter, the team reconstructed their shapes.

An analysis of the reconstructed shapes allowed them to identify two families of objects as a function of their diameters.

They categorised them as ‘spherical’ and ‘elongated’ bodies.

The density distribution appears to be strongly split into two groups, with volatile-poor, and volatile-rich bodies.

An example of a circular body is ‘Ceres’, the largest in the asteroid belt with a diameter of 940km (586 miles).

The most unusual object in the elongated family would be Kleopatra, which is shaped like a ‘dog-bone’.

The detailed images of these 42 objects are a leap forward in exploring asteroids, made possible thanks to ground-based telescopes, and ‘contribute to answering the ultimate question of life, the Universe, and everything,’ the authors said.

Those objects were photographed after being visited by NASA’s Dawn space mission and the European Space Agency’s Rosetta mission.

‘Our ESO observations have provided sharp images for many more targets, 42 in total,’ said Vernazza.

The previously small number of detailed observations of asteroids meant that key characteristics such as their 3D shape or density had remained largely unknown.

Between 2017 and 2019, Vernazza and his team set out to fill this gap by conducting a thorough survey of the major bodies in the asteroid belt.

They now have detailed images of almost every asteroid belt object larger than 124 miles (200km) in diameter, with just three more ‘major asteroids’ left to photograph.

The two smallest asteroids they imaged, using visible wavelength detectors on the VLT, were Urania and Ausonia, each only about 56 miles (90 km) in diameter.

By reconstructing the objects’ shapes, the team realised that the observed asteroids are mainly divided into two families.

Some are almost perfectly spherical, such as Hygiea and Ceres, while others have a more peculiar, ‘elongated’ shape – their undisputed queen being the ‘dog-bone’ asteroid Kleopatra.

By combining the asteroids’ shapes with information on their masses, the team found that the densities change significantly across the sample.

The four least dense asteroids studied, including Lamberta and Sylvia, have densities of about 1.3 grams per cubic centimetre – approximately the density of coal. 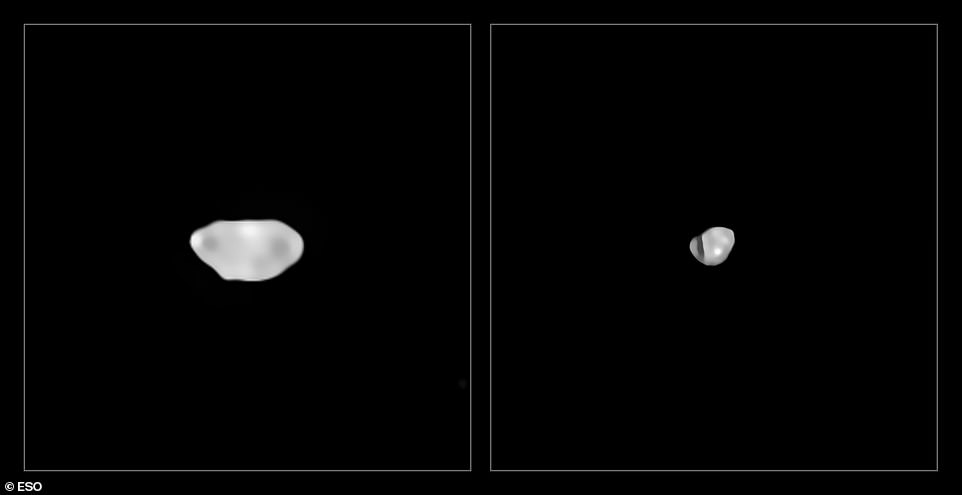 These are the least dense asteroids imaged, Sylvia and Lamberta, which have a density of about 1.3 grammes per cubic centimetre, approximately the density of coal 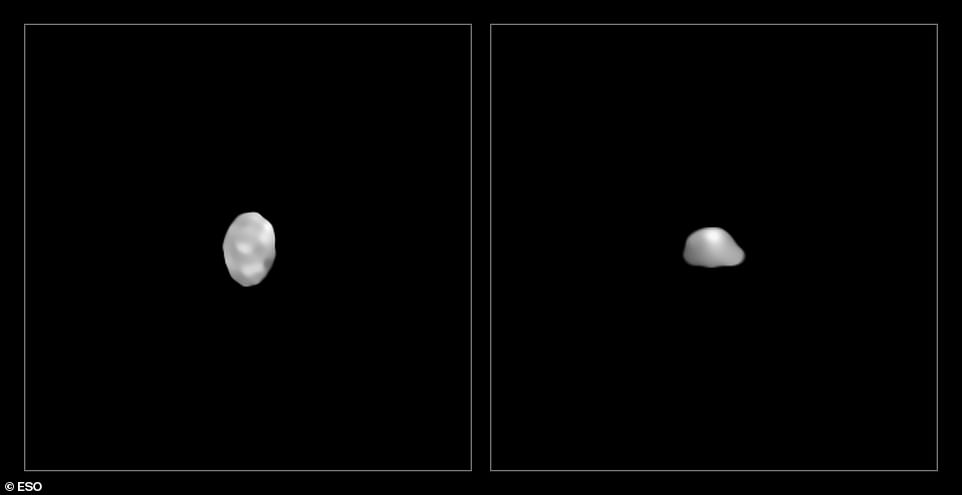 Kalliope and Psyche, the two densest objects imaged, have a density of 4.4 and 3.9 grammes per cubic centimetre respectively. NASA is sending a mission to explore Psyche, said to be worth trillions of dollars in raw material

Kleopatra is a metallic, bone-shaped asteroid with a pair of moons sitting 125 million miles from Earth.

It is located in the asteroid belt between the orbits of Mars and Jupiter.

It was discovered on 10 April 1880, by Austrian astronomer Johann Palisa at the Austrian Naval Pola Observatory, in what is now Pula, Croatia.

It is 168 miles across and 58 miles wide, with recent observations showing it is mostly a pile of rubble.

It was named after Cleopatra, the famous Egyptian queen.

Two small moons were discovered in 2008, and later named Alexhelios and Cleoselene after Cleopatra’s children.

The highest, Psyche and Kalliope, have densities of 3.9 and 4.4 grammes per cubic centimetre, respectively, which is higher than the density of diamond.

‘Our observations provide strong support for substantial migration of these bodies since their formation,’ said co-author Josef Hanuš of the Charles University, Prague.

‘In short, such tremendous variety in their composition can only be understood if the bodies originated across distinct regions in the Solar System.’

In particular, the results support the theory that the least dense asteroids formed in the remote regions beyond the orbit of Neptune and migrated inward.

These findings were made possible thanks to the sensitivity of the Spectro-Polarimetric High-contrast Exoplanet REsearch (SPHERE) instrument on the VLT.

‘With the improved capabilities of SPHERE, along with the fact that little was known regarding the shape of the largest main belt asteroids, we were able to make substantial progress in this field,’ said co-author Laurent Jorda.

Astronomers will be able to image asteroids in fine detail with ESO’s Extremely Large Telescope (ELT).

The massive observatory is currently under construction in Chile and set to start operations later this decade. 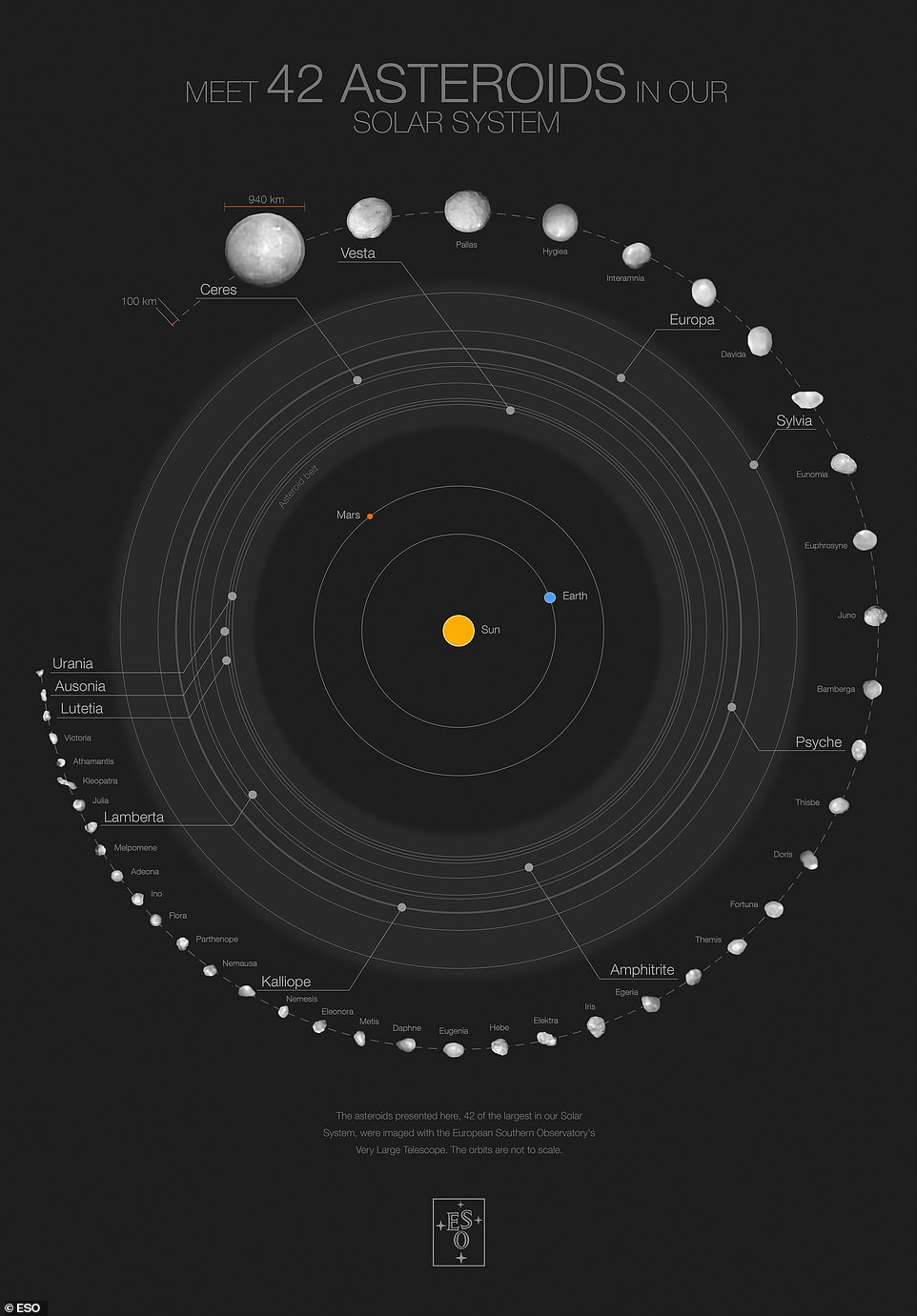 ‘ELT observations of main-belt asteroids will allow us to study objects with diameters down to 35 to 80 kilometres, depending on their location in the belt, and craters down to approximately 10 to 25 kilometres in size,’ said Vernazza.

‘Having a SPHERE-like instrument at the ELT would even allow us to image a similar sample of objects in the distant Kuiper Belt. This means we’ll be able to characterise the geological history of a much larger sample of small bodies from the ground.’

This research was presented in a paper to appear in Astronomy & Astrophysics.