One possible way to read “The Facebook Files,” The Wall Street Journal’s excellent series of reports based on leaked internal Facebook research, is as a story about an unstoppable juggernaut bulldozing society on its way to the bank.

The series has exposed damning evidence that Facebook has a two-tier justice system, that it knew Instagram was worsening body-image issues among girls and that it had a bigger vaccine misinformation problem than it let on, among other issues. And it would be easy enough to come away thinking that Facebook is terrifyingly powerful, and can be brought to heel only with aggressive government intervention. 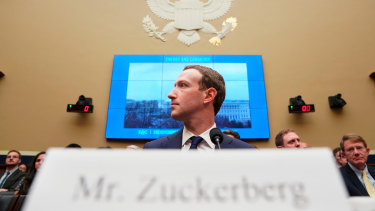 Facebook founder Mark Zuckerberg testifies in 2018 before a House Energy and Commerce hearing on Capitol Hill in Washington, about the use of Facebook data to target American voters in the 2016 election and data privacy.Credit:AP

But there’s another way to read the series, and it’s the interpretation that has reverberated louder as each new instalment has landed.

Not financial trouble, or legal trouble, or even senators-yelling-at-Mark-Zuckerberg trouble. What I’m talking about is a kind of slow, steady decline that anyone who has ever seen a dying company up close can recognise. It’s a cloud of existential dread that hangs over an organisation whose best days are behind it, influencing every managerial priority and product decision and leading to increasingly desperate attempts to find a way out. This kind of decline is not necessarily visible from the outside, but insiders see a hundred small, disquieting signs of it every day — user-hostile growth hacks, frenetic pivots, executive paranoia, the gradual attrition of talented colleagues.

It has become fashionable among Facebook critics to emphasise the company’s size and dominance while bashing its missteps. In a US Senate hearing on Thursday, lawmakers grilled Antigone Davis, Facebook’s global head of safety, with questions about the company’s addictive product design and the influence it has over its billions of users. Many of the questions to Davis were hostile, but as with most Big Tech hearings, there was an odd sort of deference in the air, as if the lawmakers were asking: Hey, Godzilla, would you please stop stomping on Tokyo?

But if these leaked documents proved anything, it is how un-Godzilla-like Facebook feels. The documents, shared with the Journal by Frances Haugen, a former Facebook product manager, reveal a company worried that it is losing power and influence, not gaining it, with its own research showing that many of its products aren’t thriving organically. Instead, it is going to increasingly extreme lengths to improve its toxic image, and to stop users from abandoning its apps in favour of more compelling alternatives. 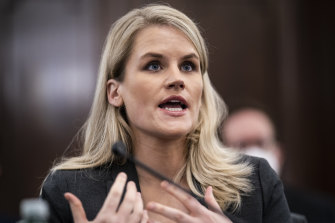 You can see this vulnerability on display in an instalment of the Journal’s series that landed last week. The article, which cited internal Facebook research, revealed that the company has been strategising about how to market itself to children, referring to preteens as a “valuable but untapped audience”. The article contained plenty of fodder for outrage, including a presentation in which Facebook researchers asked if there was “a way to leverage play dates to drive word of hand/growth among kids?”

It’s a crazy-sounding question, but it’s also revealing. Would a confident, thriving social media app need to “leverage play dates,” or concoct elaborate growth strategies aimed at 10-year-olds? If Facebook is so unstoppable, would it really be promoting itself to tweens as — and please read this in the voice of the Steve Buscemi “How do you do, fellow kids?” meme — a “Life Coach for Adulting?”

The truth is that Facebook’s thirst for young users is less about dominating a new market and more about staving off irrelevance. Facebook use among teenagers in the US has been declining for years, and is expected to plummet even further soon — internal researchers predicted that daily use would decline 45 per cent by 2023. The researchers also revealed that Instagram, whose growth offset declining interest in Facebook’s core app for years, is losing market share to faster-growing rivals like TikTok, and younger users aren’t posting as much content as they used to.

“Facebook is for old people” was the brutal verdict delivered by one 11-year-old boy to the company’s researchers, according to the internal documents.

The Facebook Files contains evidence of both types. One instalment, for example, looked at the company’s botched attempts to stop criminal activity and human rights abuses in the developing world — an issue exacerbated by Facebook’s habit of expanding into countries where it has few employees and little local expertise.

But that kind of problem can be fixed, or at least improved, with enough resources and focus. The second type of problem — when tastemakers abandon your platforms en masse — is the one that kills you. And it appears to be the one that Facebook executives are most worried about.

Take the third article in the Journal’s series, which revealed how Facebook’s 2018 decision to change its News Feed algorithm to emphasise “meaningful social interactions” instead generated a spike in outrage and anger.

The algorithm change was portrayed at the time as a noble push for healthier conversations. But internal reports revealed that it was an attempt to reverse a years-long decline in user engagement. Likes, shares and comments on the platform were falling, as was a metric called “original broadcasts”. Executives tried to reverse the decline by rejiggering the News Feed algorithm to promote content that garnered a lot of comments and reactions, which turned out to mean, roughly, “content that makes people very angry”.

“Protecting our community is more important than maximising our profits,” says Joe Osborne, a Facebook spokesman. “To say we turn a blind eye to feedback ignores these investments, including the 40,000 people working on safety and security at Facebook and our investment of $13 billion since 2016.” 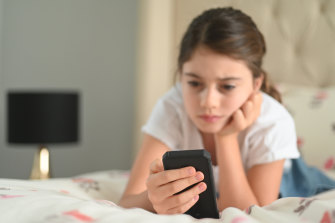 Claims have been aired that Facebook knew Instagram was worsening body-image issues among girls and did nothing.Credit:iStock

It’s far too early to declare Facebook dead. The company’s stock price has risen nearly 30 per cent in the past year, lifted by strong advertising revenue and a spike in use of some products during the pandemic. Facebook is still growing in countries outside the US, and could succeed there even if it stumbles domestically. And the company has invested heavily in newer initiatives, like augmented and virtual reality products, that could turn the tide if they’re successful.

But Facebook’s research tells a clear story, and it’s not a happy one. Its younger users are flocking to Snapchat and TikTok, and its older users are posting anti-vaccine memes and arguing about politics. Some Facebook products are actively shrinking, while others are merely making their users angry or self-conscious.

None of this is to say that Facebook isn’t powerful, that it shouldn’t be regulated or that its actions don’t deserve scrutiny. It can simultaneously be true that Facebook is in decline and that it is still one of the most influential companies in history, with the ability to shape politics and culture all over the globe.

But we shouldn’t mistake defensiveness for healthy paranoia, or confuse a platform’s desperate flailing for a show of strength. Godzilla eventually died, and as the Facebook Files make clear, so will Facebook.

This article first appeared in The New York Times.

The Morning Edition newsletter is our guide to the day’s most important and interesting stories, analysis and insights. Sign up here.