Free apps that offer in-app-purchases now include a ‘Report a Problem’ option that lets users give specific reasons to why they are reporting the app.

Users can now highlight a quality issue with the application, report offensive, abusive or illegal content and even ask for a refund.

Before the update, users had to have spent money on an in-app purchase to have access to the feature.

However, the new feature only appears to be available to users in the U.S. 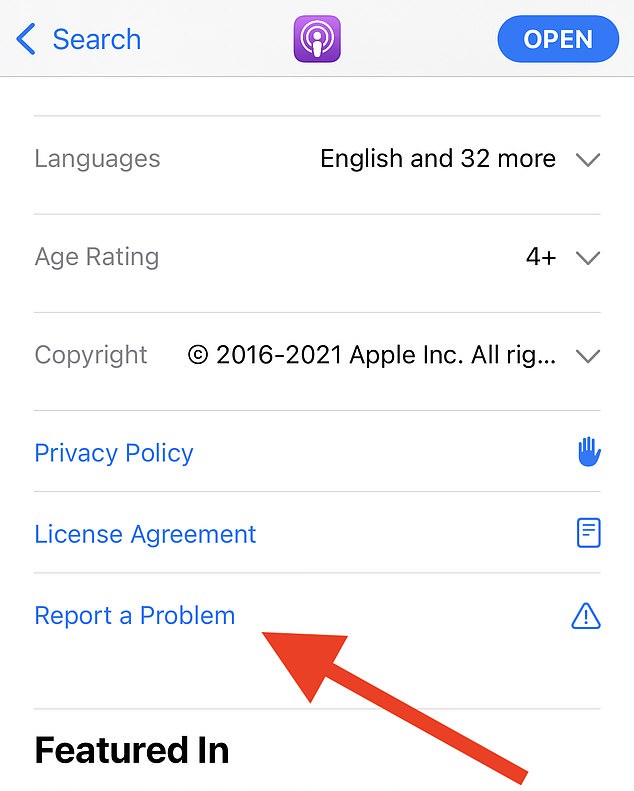 Apple previously included a similar button in its App Store, but users had to scroll to the bottom of the Apps or Games tabs and then sign into the website before reporting an issue or go through Apple Support.

The iOS 15 update makes puts the button front and center and includes a drop-down function with specific issues to choose from.

The new feature was first spotted by Kosta Eleftheriou, a developer located in San Francisco, who shared screen shots of the button to his Twitter account.

The new feature was first spotted by Kosta Eleftheriou , a developer located in San Francisco, who shared screen shots of the button to his Twitter account

The move comes after Apple also began accepting App Store reviews and ratings for its own apps, a move that has seen several its apps receive poor scores – specifically Apple Podcasts.

Users can now note a quality issue with the application, report offensive, abusive or illegal content and even ask for a refund

Apple Podcasts currently has a two-star rating, with several users saying the app is outdated and constantly crashes.

With the new feature, users can report a quality issue or ask for a refund if they had purchased a podcast within the app.

This was a result of Epic Games offering users in-app purchase outside of the App Store in an attempt to bypass paying the tech giant’ 30 percent cut.

The back-and-forth debate was finally put to rest last month when a California judge ordered the tech giant to loosen payment restrictions inside apps hosted on iPhones and iPads.

Until now, Apple has made app developers hand over a 30 percent cut of any income that is made from in-app purchases. It has also prohibited developers from rolling out their own direct payment features, such as buttons or links, in a bid to circumvent such fees.

However, Judge Yvonne Gonzalez Rogers ruled that Apple’s enforcement of such rules was ‘anticompetitive’.

Barring any legal challenges, software developers will be able to direct users to alternative methods of payment within 90 days, which means they may no longer have to hand over the 30 percent cut to Apple.

The ruling has raised hopes that in-app purchases may soon become cheaper for users.

However, despite the seeming win regarding in-app purchases, Gonzales Rogers concluded Epic failed to demonstrate Apple is an illegal monopolist.

And Fortnite is still not available in the App Store.