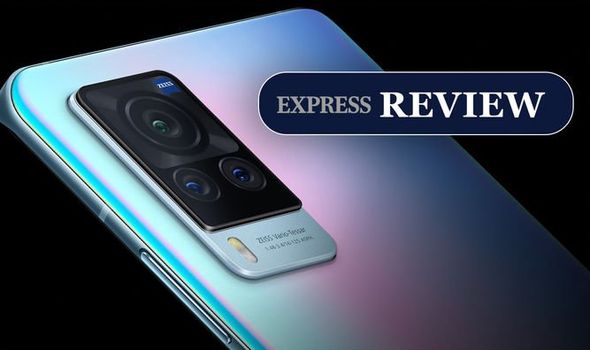 Vivo might not be a household name in the UK, but this Chinese brand should definitely not be ignored. Recent statistics have revealed that it’s now the fifth most popular smartphone brand in the world and is nipping at the heels of famous firms such as Oppo, Apple and Samsung. The company has a bunch of Android-powered devices on store shelves with prices starting from just £109, however, anyone who wants the best from Vivo should check out the X60 Pro 5G.

This phone features a 6.56-inch HD+ AMOLED display, triple rear camera and fast Qualcomm processor. The question is, should you ignore the Galaxy S21 or OnePlus 9 and invest in one? Express.co.uk has been taking a look at the X60 Pro and here’s our thoughts…

Straight out of the box, there’s plenty to like about the X60 Pro. This phone boasts a pleasant design and premium feel in your hands. The glass satin finish on the rear case looks brilliant and stops it from becoming a horrendous fingerprint magnet.

The touchscreen also curves around the sides of the chassis to make it incredibly comfy in your hands. Vivo’s design team has done a solid job on the X60 Pro, but unfortunately, it doesn’t wow you and – unlike phones like the Samsung Z Flip 3 – it’s certainly not pushing any new boundaries.

Hit the power button and your eyes will be treated to a bright 6.5-inch AMOLED screen that features a speedy 120Hz refresh rate. That makes scrolling through websites or playing the latest games and Android apps feel silky smooth and totally stutter-free.

A feature called Smart Switch can also adapt the refresh rate depending on what you’re doing to help save precious battery life. So, if you’re reading an article, like this one, the refresh rate will plummet when the webpage isn’t moving. It’s a clever idea, and really helps make things last a little longer.

Colours look bright on this HD+ display and the only thing that interrupts the brilliant experience is a tiny hole-punched selfie camera. There’s a very fast fingerprint scanner hidden beneath the screen that unlocks the handset in a flash and there’s an always-on option that constantly displays time, date, and any notifications that appear throughout the day.

Spin the X60 Pro around and you’ll find a triple-lens camera that’s powered by the experts at Zeiss. You get a standard 48-megapixel main lens with wide-angle and portrait snappers tucked neatly underneath.

Pictures taken on the phone look really good with plenty of detail and rich colours, however, they’re certainly not better than anything else we’ve seen in this price range.

One feature that does impress is the in-built image stabilisation, which uses an innovative Gimbal system that moves with to reduce blur and shake when snapping photos and videos. It works incredibly well and adds some Hollywood style to your home movies.

Like most premium Android phones, the X60 offers 4K recording and can take great images in the dark thanks to its Night Mode. If you want to get up close and personal then you’ll get a macro option which makes shooting objects in fine detail a breeze.

Head under the hood and there’s a Snapdragon 870 processor which is good but not as powerful as the more premium 888 found in some of the X60’s rivals. There’s also a generous 256GB of storage, 5G data compatibility, all-day battery life and fast charging thanks to the 33W power pack supplied in the box.

The device runs on Android 11 with Vivo adding its own extras via its FunTouch OS. Despite its rather bizarre name, the operating system is nice to use and there’s plenty of extras such as customisable alerts, gesture controls and nifty one-handed mode.

This is a good device from Vivo, but there are some issues. With a price of over £700, this is not a cheap phone yet it’s lacking some features we’d expect from a premium device.

For example, there’s no water resistance rating, it’s running that slower 870 processor and you can’t charge it wirelessly.

The design is nice but it’s not going to turn heads when you pull it from your pocket and whilst the cameras are good we’ve definitely seen snaps that are just as good shot on other devices. This is, of course, a crowded market and we’re just not sure the X60 Pro does quite enough to stand out from its more famous rivals.

The Vivo X60 Pro is a solid phone, with plenty of great features. You’ll find a lovely AMOLED screen with a silky-smooth high refresh-rate, solid design, fast under-screen fingerprint scanner, plenty of storage, 5G and a decent camera. The device also comes with a powerful mains plug in the box for fast recharging and the Android 11-based FunTouch OS offers plenty of customisation. Phew, that’s a lot.

Unfortunately, there are some downsides. The biggest problem for the impressive X60 Pro is that some of its rivals offer similar – and sometimes better – features for the same, or lower prices. Coupled with the fact that many of these brands are more recognisable and have a longer track record when it comes to updating their devices with new operating system versions, security updates, and customer support… its easier to recommend these rival devices.

For example, you can buy the excellent Galaxy S21 for just £779 or treat yourself to the supremely powerful OnePlus 9 for £629.

There’s plenty to like about X60 Pro, but we wish it did a bit more to stand out from the hugely competitive (and ever-growing) Android crowd. Vivo has also just announced the X70 range which means the X60 now has another rival!

This article contains affiliate links, which means we may receive a commission on any sales of products or services we write about. This article was written completely independently, see more details here