Archaeologists in Greece say a 14th-century Byzantine warrior survived a broken jaw by having it wired shut — most likely with gold.

The man’s skull was first uncovered in 1991, interred in the grave of a 5-year-old child in a cemetery inside a fort in ancient Thrace following the decapitation of the warrior by the Ottoman army.

But it was only recently did researchers notice the soldier’s had jaw being shattered in two places a decade before he died, then carefully reset by a knowledgeable medical professional.

The team believe the skilled healer was following advice on jaw injuries laid out by iconic Greek physician Hippocrates nearly 2,000 years before. 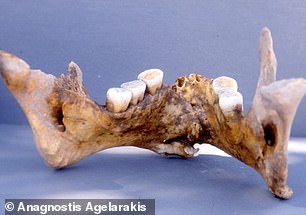 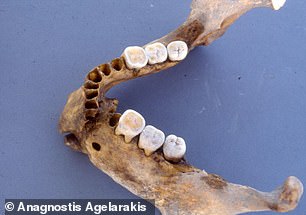 The jaw of a 14th-century Byzantine warrior discovered in Thrace indicates it had been fractured and then wired with gold thread while it healed. Such a high level of care was rare at the time, but the approach had been recommended 1,800 years earlier by Hippocrates

The unknown warrior’s skull and lower jaw were unearthed 30 years ago at the site of fort Polystylon, a Byzantine stronghold built on the remains of the ancient Greek city of Abdera near the Aegean, in what is now Western Thrace.

They had been ‘caringly interred’ with the girl’s skeleton, according to a new report published in the journal Mediterranean Archaeology and Archaeometry.

Both sets of remains were found in a cist, or stone coffin, in the middle of a 20-plot cemetery at the fort that had been obscured by centuries of earth.

‘Large ceramic fragments’ nearby may have come from a cup used to dig the grave. 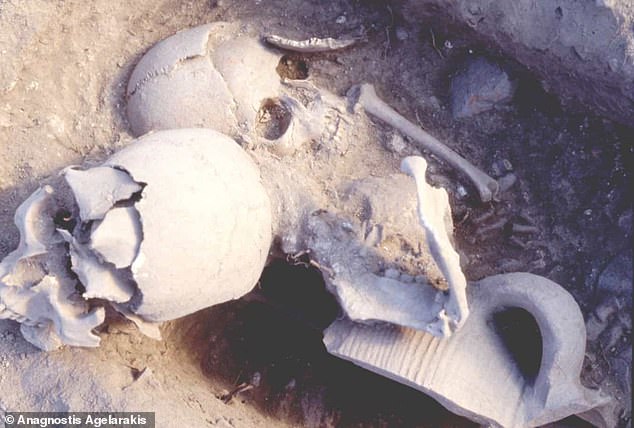 The warrior was probably 35 or 40 when he was beheaded by invading Ottomans. His decapitated head was buried with the remains of a five-year-old girl, likely in secret

It’s not clear if the warrior and his young grave mate were related or knew each other.

Anagnostis Agelarakis, an Adelphi University archaeologist who led the excavation, had logged the remains back in the ’90s but only recently noticed the warrior’s healed mandible, a rarity in that era.

‘The jaw was shattered into two pieces,’ Agelarakis told Live Science. He praised the skill and knowledge that allowed ‘the medical professional … to put the two major fragments of the jaw together.’

Such a wound would have made eating or drinking incredibly hard and could have resulted in the victim starving to death. 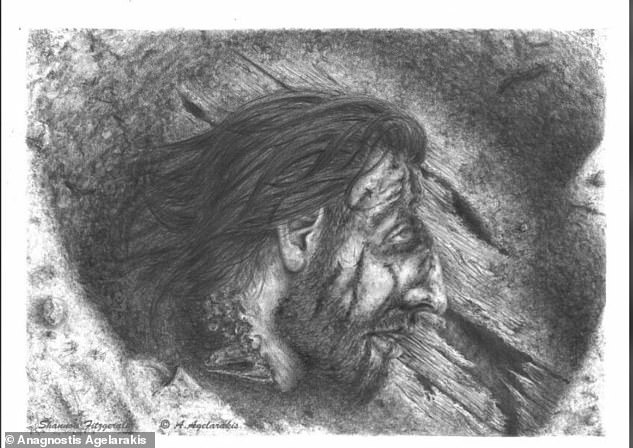 An illustration of the decapitated Byzantine warrior’s head

The level of care the man received suggests he was a VIP, according to Agelarakis.

‘He was the military leader, most probably of the fort,’ he told Live Science. That would also explain why he was decapitated by the Ottomans when they overran the stronghold.

He still had a slightly misaligned jaw, but Agelarakis put that down to medical complications or possibly even the warrior’s inability to stay immobile, rather a lack of skill on the surgeon’s part.

‘In fact, had there not been follow-up adjustment treatments of the aligned jaw fragments by the physician, the fractured jaw component identified as the base triangle would not have been set to fuse as close [as they did],’ the authors wrote in their paper.

While the actual metal used to wire his jaw shut is long gone, Agelarakis is fairly confident it was gold: It would have to be something strong but pliable and non-toxic, and the jaw lacked the typical gray discoloration seen with with silver or the green patina associated with copper wiring stains.

One tooth was filed down so that the knot that tied the wire wouldn’t scratch his cheek. 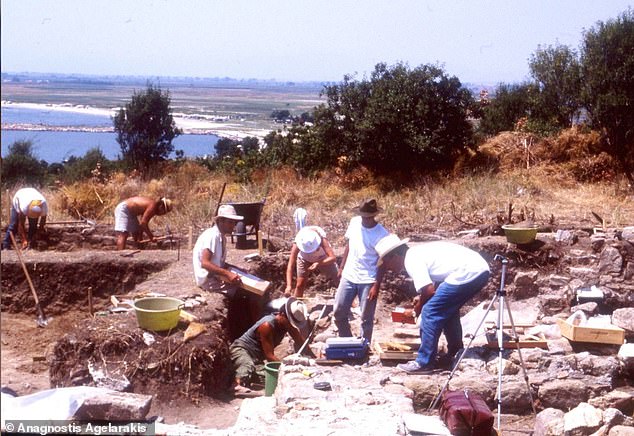 Anagnostis Agelaraki and archaeologists first excavating the cemetery at Polystylon fort in 1991. The unique injury on the soldier’s mandible was only recently discovered

Based on tartar buildup on his teeth where the wire was threaded, Agelarakis believes the soldier suffered the injury about a decade before his violent death at age 35-40.

How he fractured his jaw isn’t clear, but Agelarakis suggested possibilities included a fall from a horse or a wound from a spearhead or projectile.

The authors say the discovery of his treatment ‘reflected on the continued implementation of an intervention approach that had been recommended 1,800 years earlier’ by Hippocrates’ treatises.

It also provides ‘glimpses of the human condition during the most tumultuous last 100 years of the [Byzantine] Empire,’ they wrote. 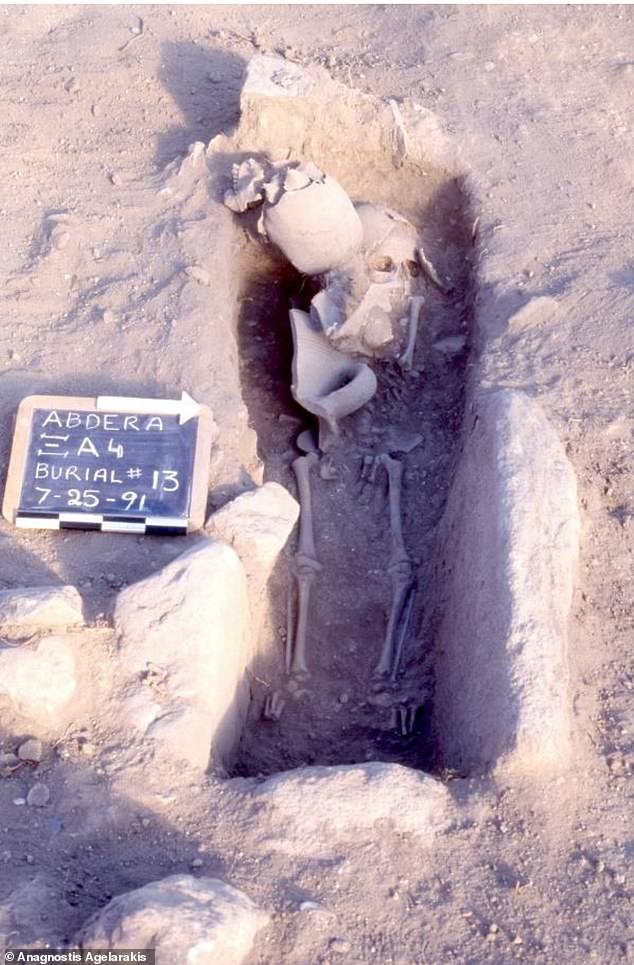 Both sets of remains were found in a cist, or stone coffin, in the middle of a 20-plot cemetery at the fort that had been obscured by centuries of earth

The warrior was likely decapitated in the 1380s, when the fort was sacked by invading Ottomans.

His skull was also bashed in, they wrote, with a’ ghastly-sized’ fracture on the upper part of his face and other blunt-force trauma caused ‘by the strike of different types of weapons.’

Given that his head was placed in someone else’s grave, without the rest of its body, Agelarakis theorized his burial was done quickly without the Ottoman’s awareness.

His ‘horrific suffering and decapitation’ suggest the fort was not surrendered, ‘but that it must have been taken by force,’ according to the study.

This newest discovery offers ‘testimonial on the defense of the fort under siege, the heroic resistance to the invaders, and the inhumane consequences suffered at the hands of the conquerors.’