It probably hasn’t been the best time to launch a phone-based game that invites players to wander the actual streets of Melbourne to interview virtual “witnesses” as they try to solve a 122-year-old crime. But Eastern Market Murder, created by husband-and-wife duo Andy Yong and Emma Ramsay, has found its way in the world all the same.

The augmented-reality true crime game, launched in May, is nominated in two categories at next week’s Australian Game Developer Awards, to be presented online as part of Melbourne International Games Week. 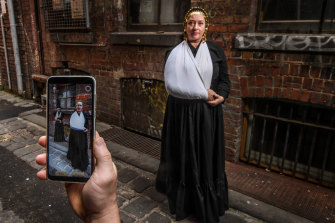 Emma Ramsay, co-creator of the Eastern Market Murder mobile phone app, in period costume at a key location from the case, and the game.Credit:Justin McManus

It’s the second foray into historical mystery from the couple under the True Crime Games banner. “It’s something we’ve always been interested in, particularly crimes that happened locally,” says Ramsay, resplendent in a Victorian-era fortune teller’s outfit she picked up at Emu Plains Market on the Mornington Peninsula, and which she intends to wear to the virtual awards ceremony.

“We love that you can play it on the streets where it actually happened, you can uncover all the injustices, and you get to confront the killer at the end. You put a virtual window up against the wall of the actual building where the prison used to be, you look into the jail cell and confront the murderer with all the evidence you’ve collected through the game.”

The Eastern Market was on the corner of Bourke and Stephen (now Exhibition) streets in the city, and in 1899 stallholder Emery Gordon Medor had a stall near former circus performers Francis and Annie Stevens (aka Cartwright). Medor, who practiced phrenology, the now-discredited “science” of telling character by studying the bumps on the human cranium, apparently didn’t much like his neighbours. One April morning he fired two shots at Annie, then twice shot, before slitting the throat of, her husband.

Ramsay, whose background is in communications, and Yong, who has been in the gaming industry for more than a decade, became fascinated by the case after hearing about it on the true crime podcast Dead and Buried. They stumbled upon the story for their first AR crime app, Misadventure in Little Lon, after participating in a Melbourne Historical Crime Tour of the former brothel district. “We just keep an ear to the ground for what interests us,” says Ramsay.

With both apps, the challenge was to make something that would work for an audience far broader than your typical gamers. “We appeal to people who are really into history but have never touched a game in their lives, and then you’ve got your gamers who love murder-mystery games. It’s got to be intuitive enough for everyone to play but challenging enough that gamers are into it as well.”

It seems to have hit that sweet spot, with the pair being approached by people in South Africa, the US and the UK about the possibility of creating similar city-specific true-crime adventures for other territories.

They’re not the only ones finding that in Melbourne’s game-development scene, the phone is increasingly where it’s at.

“The mobile platform is really everywhere these days,” says Alison Gibb, chief executive of EA/Firemonkeys, whose Melbourne studio created the phone-based version of The Sims. “There’s such an explosion. Having your game in your pocket is really important to players.” 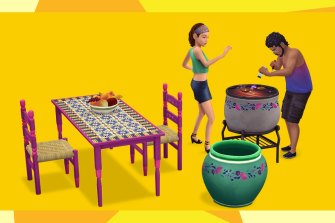 The scale of the games market is staggering, with revenues tipped to reach more than $US175 billion ($242 billion) worldwide this year, more than triple the size of the pre-pandemic cinema business. Of that figure, more than half – $US91 billion – is mobile-based.

Little wonder the Victorian government has invested $4.3 million this financial year in a bid to ensure we get a fair slice of that action.

Without that funding, Ramsay and Yong – who have three children, aged seven to 15 – would have struggled to develop their latest game, which took around 18 months and $130,000 to bring to market.

“I’ve been overwhelmed by the support,” says Ramsay. “The games community has been amazing. It’s like everyone’s holding hands and helping everyone along.”

Find out the next TV, streaming series and movies to add to your must-sees. Get The Watchlist delivered every Thursday.

Most Viewed in Culture