The melting of polar ice from Antarctica, the Arctic and Greenland is warping the Earth’s crust — with the effect felt thousands of miles away, a study has found.

When ice sheets build up on the land, their weight causes the crust beneath the ice to sink a bit to compensate, much like how a laden boat sits lower in the water.

As the ice melts, this weight is removed, and so the crust rises up again in response in a process that scientists call ‘isostatic rebound’.

While this up-and-down movement has long been understood, researchers led from Harvard University wanted to explore whether the crust might also shift sideways.

The team analysed satellite data on polar ice losses from 2003–2018 to model the resulting impact on crustal motions.

They found that melting Arctic and Greenland glaciers caused the ground to shift horizontally in much of the Northern hemisphere, and by up to 0.3mm in the US.

And in some places — even far from the melting ice — the mass loss was surprisingly causing the crust to move more horizontally than it was rebounding vertically.

Alongside showing that polar melting is impacting more than just sea levels, the findings provide a new way to measure ice mass changes by crustal topography. 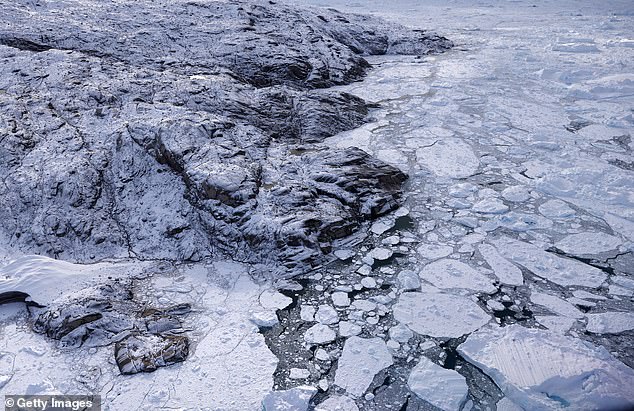 The melting of polar ice from Antarctica, the Arctic Islands and Greenland is warping the Earth’s crust — with the effect felt thousands of miles away, a study has found. Pictured: ice melting on the coastline of Greenland, as captured by a NASA aircraft on September 7, 2021

One intriguing consequence of crustal rebound in the wake of the last ice age is that England is somewhat sinking.

As the ice sheet that once covered the whole of Scotland melted, the north of the UK ‘rebounded’ from the removal of the mass that was holding it down.

And, as a consequence, England, Wales and southern Island are descending, much like if they were on the other end of a see-saw.

According to University of Durham geologists, Scotland could rise by up to 4 inches in some areas — offsetting sea level rise derived as a result of global warming.

England, however, may not be so lucky, with the experts having predicted subsidence of up to 2 inches over the same period — amplifying sea level rises by around 10–33 per cent.

The study was undertaken by earth scientist Sophie Coulson, formerly of Harvard University, and her colleagues.

‘Scientists have done a lot of work directly beneath ice sheets and glaciers,’ explained Dr Coulson, who is now based at the Los Alamos National Laboratory.

‘So they knew that it would define the region where the glaciers are, but they hadn’t realized that it was global in scale.’

To explain how the loss of ice can affect the crust beneath it, Dr Coulson suggests envisaging a smaller-scale analogy.

‘Think of a wooden board floating on top of a tub of water. When you push the board down, you would have the water beneath moving down. If you pick it up, you’ll see the water moving vertically to fill that space, she said.

The shifting of the crust as the weight of the ice is removed from it can also create a positive feedback affect — accelerating the ice loss.

‘In some parts of Antarctica, for example, the rebounding of the crust is changing the slope of the bedrock under the ice sheet,’ explained Dr Coulson.

‘That can affect the ice dynamics.’

Alongside the current melting, the researchers also said that some regions — like the Arctic — are also still moving as a result of much older changes in ice burden.

‘The Arctic is an interesting region because, as well as the modern-day ice sheets, we also have a lasting signal from the last ice age,’ Dr Coulson explained.

‘The Earth is actually still rebounding from that ice melting.’

This ice sheet covered what is now Northern Europe and Scandinavia for much of the Pleistocene Epoch, which ran from 2.6 million to 11,000 years ago.

‘On recent timescales, we think of the Earth as an elastic structure, like a rubber band, whereas on timescales of thousands of years, the Earth acts more like a very slow-moving fluid,’ added Dr Coulson.

‘Ice age processes take a really, really long time to play out, and therefore we can still see the results of them today.

‘Understanding all of the factors that cause movement of the crust is really important for a wide range of Earth science problems.

‘For example, to accurately observe tectonic motions and earthquake activity, we need to be able to separate out this motion generated by modern ice-mass loss.’ 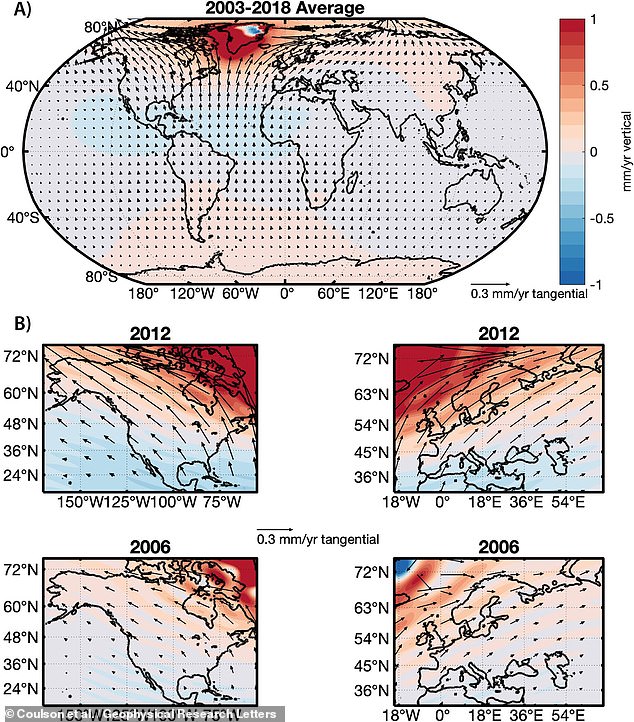 ‘Scientists have done a lot of work directly beneath ice sheets and glaciers,’ explained Dr Coulson, who is now based at the Los Alamos National Laboratory. ‘So they knew that it would define the region where the glaciers are, but they hadn’t realized that it was global in scale.’ Pictured: predicted average crustal deformation rates generated by ice loss from the Greenland Ice Sheet from 2003–12 (top) and comparing years of low (2006) and high (2012) mass loss (bottom). Vertical motion is reflected by red–blue shading, with horizontal motions depicted by the black arrows

According to University of Ottawa earth scientist Glenn Antony Milne, understanding the scale of this movement will help clarify all studies of the planet’s crust.

‘Sophie’s work is important because it is the first to show that recent mass loss of ice sheets and glaciers causes 3D motion of the Earth’s surface that is greater in magnitude and spatial extent than previously identified,’ he said.

‘Also, one could look for this signal in regional and larger-scale global navigation satellite system datasets to, in principle, produce improved constraints on the distribution of ice mass fluctuations and/or solid Earth structure.’

The full findings of the study were published in the journal Geophysical Research Letters.

WHY IS BEDROCK IN ANTARCTICA RISING AND HOW CAN IT STABILISE THE CONTINENT?

The rate is likely to accelerate and could total eight metres (26.25 feet) this century.

The bedrock is rising because, as ice melts, its weight on the rock below lightens.

Over time, the bedrock lifts in response, pushed up by the flow of the viscous mantle below Earth’s surface.

Much of the West Antarctic ice sheet, which has enough ice to raise world sea levels by more than three metres (10 feet) if it ever all melted, rests on the seabed.

It is pinned down by the weight of ice above and currently contributes to approximately 25 per cent of global land-based ice melt each year.

The fast rise of the bedrock beneath will lift ever more of the ice onto land.

This will reduce the risks of a breakup of the sheet caused by warming ocean water seeping beneath the ice.