Clouds of gas are detected on a giant ‘hot Saturn’ exoplanet 520 light years from Earth, in breakthrough that could help in the search for worlds that may have conditions hospitable to life

Clouds of gas swirling in the atmosphere of a ‘hot Saturn’ exoplanet 520 light years from the Earth have been detected by astronomers for the first time.

This is a breakthrough in exoplanet observation, and could help in the search for potentially habitable worlds, said experts from the Université de Montréal in Canada.

The exoplanet, called WASP-127b, was discovered in 2016 and is a ‘hot puffy beast’ orbiting so close to its star that a year on the gas giant would be just 4.2 Earth days.

The international team of astronomers has not only detected clouds on the distant exoplanet, but also measured their altitude with unprecedented precision. 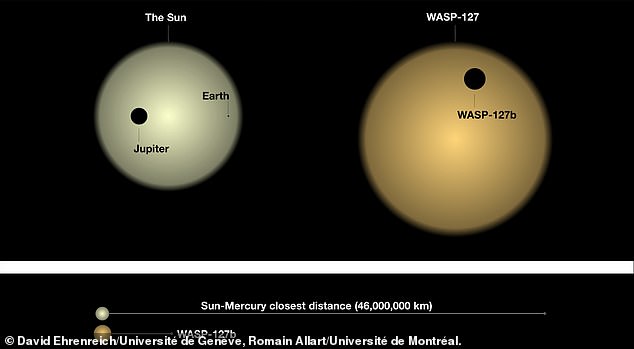 WASP-127b was discovered in 2016 and is a ‘hot puffy beast orbiting so close to its star that a year on the gas giant would bee just 4.2 Earth days

WASP-127 b is a gas giant exoplanet that orbits a G-type star.

They combined observations of the planet from the Hubble Space Telescope and the European Southern Observatory’s Very Large Telescope. (VLT) in Chile.

The team observed the planet passing in front of its host star to detect patterns that become embedded in the starlight as it is filtered through the planet’s atmosphere.

Thanks to infrared light from Hubble and visual light seen through the ESPRESSO spectrograph on VLT, they could probe different regions of the atmosphere.

‘First, as found before in this type of planet, we detected the presence of sodium,’ author Dr Romain Allart, said.

But it was found at a much lower altitude than the team were expecting.

‘Second, there were strong water vapour signals in the infrared but none at all at visible wavelengths.

‘This implies that water-vapour at lower levels is being screened by clouds that are opaque at visible wavelengths but transparent in the infrared.’

The combined data from the two instruments enabled the researchers to narrow down the altitude of the clouds.

They pinned them to an atmospheric layer with a pressure ranging between 0.3 and 0.5 millibars.

A millibar is a unit of air pressure, with one equal to about 0.0145 pounds per square inch, or about a thousandth of a standard atmosphere.

‘We don’t yet know the composition of the clouds, except that they are not composed of water droplets like on Earth,’ said Allart.

‘We are also puzzled about why the sodium is found in an unexpected place on this planet. Future studies will help us understand not only more about the atmospheric structure, but about WASP-127b, which is proving to be a fascinating place.’ 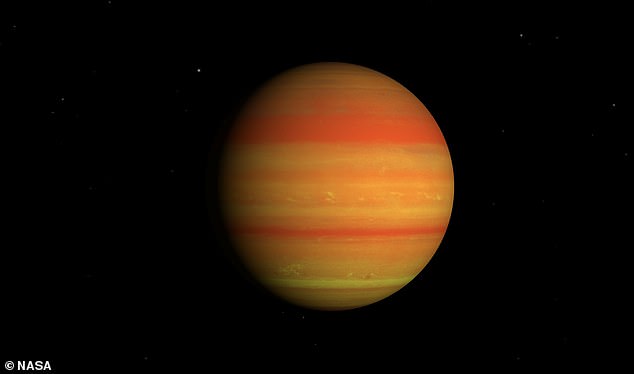 The international team of astronomers has not only detected clouds on the distant exoplanet, but also measured their altitude with unprecedented precision

WHAT IS THE VERY LARGE TELESCOPE?

It is called the Very Large Telescope (VLT) and is regarded as one of the most advanced optical instruments.

This interferometer allows images to be filtered for any unnecessary obscuring objects.

As a result, astronomers can see details up to 25 times finer than with the individual telescopes.

It has been involved in spotting the first image of an extrasolar planet.

The study of exoplanet atmospheres is essential for understanding the formation, evolution, and composition of exoplanets, the team said.

The transmission spectroscopy technique, used in this study, is playing a significant role in this field, and helped characterise WASP-127b.

With a full orbit around its star occurring in about four days, WASP-127b receives 600 times more solar radiation than the Earth and experiences temperatures up to 1100 degrees Celsius (2012 Fahrenheit) – more than twice as hot as Venus.

This puffs the planet up to a radius 1.3 times larger than Jupiter, with just a fifth of the mass, making it one of the least dense or ‘fluffiest’ exoplanets ever discovered.

The extended nature of fluffy exoplanets makes them easier to observe, and thus WASP-127b is an ideal candidate for astronomers trying a new technique.

In this case they were working on characterising aspects of exoplanet atmospheres, a process that could one day help in the search for alien life.

The team’s observations with the ESPRESSO instrument also suggests that, unlike planets in our Solar System, WASP-127b orbits not only in the opposite direction than its star but also in a different plane than the equatorial one.

Planets in the solar system orbit along the equatorial plane – that is inline with the centre of the sun – with some objects like comets orbiting at a different plane.

‘Such alignment is unexpected for a hot Saturn in an old stellar system and might be caused by an unknown companion,’ said Allart.

The findings have been published in the journal Astronomy and Astrophysics.

Distant stars and their orbiting planets often have conditions unlike anything we see in our atmosphere.

To understand these new world’s, and what they are made of, scientists need to be able to detect what their atmospheres consist of.

They often do this by using a telescope similar to Nasa’s Hubble Telescope.

These enormous satellites scan the sky and lock on to exoplanets that Nasa think may be of interest.

Here, the sensors on board perform different forms of analysis.

One of the most important and useful is called absorption spectroscopy.

This form of analysis measures the light that is coming out of a planet’s atmosphere.

Every gas absorbs a slightly different wavelength of light, and when this happens a black line appears on a complete spectrum.

These lines correspond to a very specific molecule, which indicates it’s presence on the planet.

They are often called Fraunhofer lines after the German astronomer and physicist that first discovered them in 1814.

By combining all the different wavelengths of lights, scientists can determine all the chemicals that make up the atmosphere of a planet.

The key is that what is missing, provides the clues to find out what is present.

It is vitally important that this is done by space telescopes, as the atmosphere of Earth would then interfere.

Absorption from chemicals in our atmosphere would skew the sample, which is why it is important to study the light before it has had chance to reach Earth.

This is often used to look for helium, sodium and even oxygen in alien atmospheres.