Can’t shift a headache? Listen to this song! Nurofen develops a music track that it claims can reduce PAIN

A new song has been written that can reduce the intensity of a painful headache, helping you tune out your suffering, according to its developers.

It uses instrumental, orchestral and vocal elements to create a sense of ‘wonder,’ according to its co-creator, Dr Claire Howlin, from University College Dublin.

Named All of US, it was tested on 286 people suffering from active acute pains including headache, backache and general muscle ache, the team explained.

Working with musician Anatole, they wanted to create something that would ‘help people feel empowered so they could dissociate from their pain.’

Funded by Nurofen, the testing found that All Of Us helped to reduce feelings of pain intensity and unpleasantness in a way that was clinically and statically significant.

It works through both distraction from the pain, and by convincing the brain to release a dose of the happy chemical, dopamine. 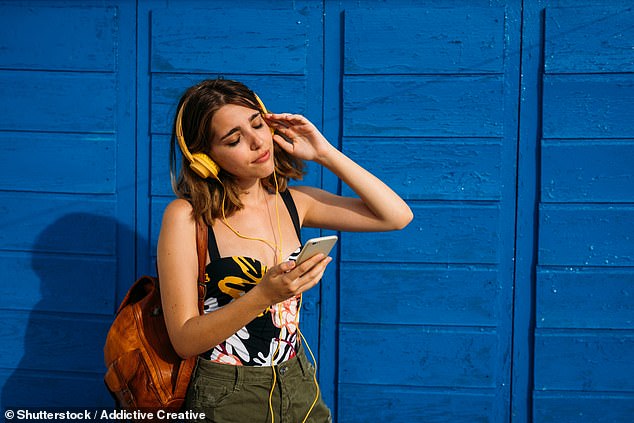 A new song has been written that can reduce the intensity of a painful headache, helping you tune out your suffering, according to its developers. Stock image

Tuning out pain with music

A survey of 2,000 people found 15 per cent identified music as a way to better tolerate acute pain.

However, 80 per cent said they would if music was proven to help.

The new track is part of the Nurofen Tune Out Pain project that brings together experts from the worlds of science, pain management and music.

Anatole, is a conservatory-trained trumpeter and multi-instrumentalist, and was brought on board to compose the track, based on research by Dr Howlin.

During testing, participants with different types of acute pain such as headache, backache or period pain reported their levels of pain intensity decreasing while listening to the track.

Dr Howlin’s research into music and pain allowed her to direct Anatole to include certain elements required to help properly distract from suffering.

This included making the track as engaging, interesting and enjoyable as possible so people would not focus on their pain.

This was achieved by applying instrumental and orchestral sounds, such as strings, pianos, bells, and minor vocal samples, to elicit a sense of wonder, empowerment and inspire mental strength to help dissociate from pain.

‘Creating music that was driven by science was an exciting challenge for me as a music producer’ commented Anatole.

‘All Of Us is special because every note, beat and sound is designed to create a particular effect on the listener, based on insights provided by Dr Howlin.

‘Music and pain is something all of us experience – this project shows how powerful music is and the potential benefit to our wellbeing.’

Dr Howlin said music has the ability to give people a big burst of dopamine in their neural reward network.

‘This track reduced both pain intensity and unpleasantness and to achieve an effect of this size for a completely unfamiliar track, really underscores the potential of creating specific pieces of music for pain management,’ she explained.

The full results of the Tune Out Pain study will be submitted to an academic journal for publication.

The research is intended to help further scientific understanding of how holistic pain management techniques, such as listening to music, can help people with acute pain. 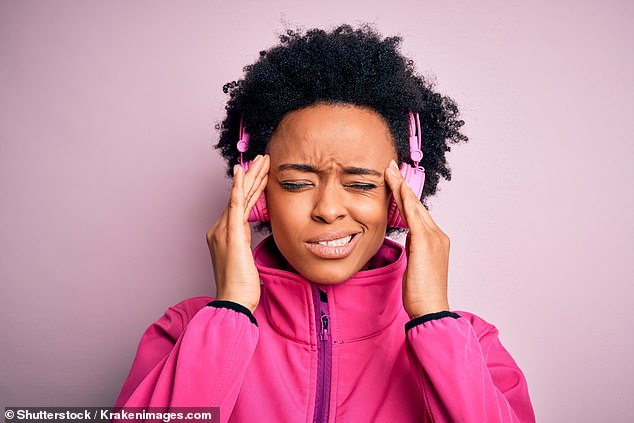 Named All of US, it was tested on 286 people suffering from active acute pains including headache, backache and general muscle ache, the team explained. Stock image

Dopamine is a neurotransmitter that is known to play a role in how our brains derives pleasure from activities such as gambling and sex, as well as addiction.

These gratifying activities, and addictive drugs, increase the level of dopamine in the brain.

When we have too little dopamine, we tend to feel bored, unmotivated, or depressed.

Dopamine is produced in several parts of the brain, including in the hypothalamus.

Its effects on the brain depend on a few different factors, such as the types of neurons that its combined with.

Scientists originally thought that this substance was related to true pleasure.

New research suggests that dopamine is more related to anticipatory pleasure and motivation.

Additional research from Nurofen shows that only 15 per cent of people identified music as a good way to better tolerate acute pain.

This was when compared to other complimentary methods such as regular exercise, a good night’s sleep, or breathing techniques.

However, 69 per cent of respondents said they were interested in more holistic pain-relieving methods to use alongside over-the-counter medication.

The survey of 2,000 people found that 71 per cent also agree music has a positive impact on their general wellbeing and 74 per cent believe it has the ability to make them feel different emotions.

Other findings include the fact classical and pop were the genres people were most likely to listen to if they were in pain, coming in at 32 and 31 per cent.

In England, there was a clear north-south divide in musical tastes to manage pain – respondents from Greater London, the South East and South West were more likely to listen to classical, but pop was the first choice in the North East and Yorkshire.

Sezi Unluturk, Category Manager at Nurofen UK said; ‘At Nurofen, we believe that pain should never hold you back in life. That’s why we are always searching for new ways to manage it.

The track is available on Spotify.

Time to tweak the car playlist? Listening to singalong hits behind the wheel increases your chance of making errors by leaving you ‘mentally overloaded’, study warns

Playing singalong hits behind the wheel may leave you ‘mentally overloaded’ and at risk of errors, a study has warned. Or, as Rihanna might put it: ‘Shut up and drive!’

Researchers led from Brunel University put 34 adult volunteers in a driving simulator programmed to replicate urban roads and had them follow a set route.

During each eight-minute simulation, drivers were faced with five events to handle, including a pedestrian crossing the road, red traffic lights and a truck to overtake.

The team monitored each driver under one of six sound conditions — including urban traffic noise, spoken lyrics and either soft or loud music with or without lyrics.

They found that — perhaps because they were knew they were being observed — the drivers’ speed and performance was mostly unaffected by the music choices.

However, the researchers did find that listening to music that was loud or had lyrics led to higher levels of affective (emotional) arousal than soft, non-lyrical pieces.

Past studies have noted that loud, lyrical music can elevate levels of activation and aggression, and encourage overconfidence, particular among younger drivers.

‘Drivers should consider the use of soft, non-lyrical music to optimise their affective state during urban driving,’ the researchers concluded.