A 12th-century idol representing the Hindu god Ganesh has been discovered accidentally in southeastern India.

A farmer in the village of Motupalli in Prakasam District stumbled across the stone statue while tilling his land.

In Hinduism, Lord Ganesh is presented as a portly elephant-headed figure with four arms.

He is considered the god of wisdom, the patron of science and art and the remover of obstacles.

Standing about 18 inches tall, the idol displays Ganesh sitting cross-legged, known as the ‘Padmasana’ posture, on a lotus pedestal.

Two of the idol’s hands are broken—in one remaining hand he holds his  broken tusk and in the other a sweet Indian dumpling known as a modaka.

The announcement of the idol’s discovery came during the 10-day Ganesh Chaturthi festival, when Hindus celebrate Lord Ganesh’s birth. 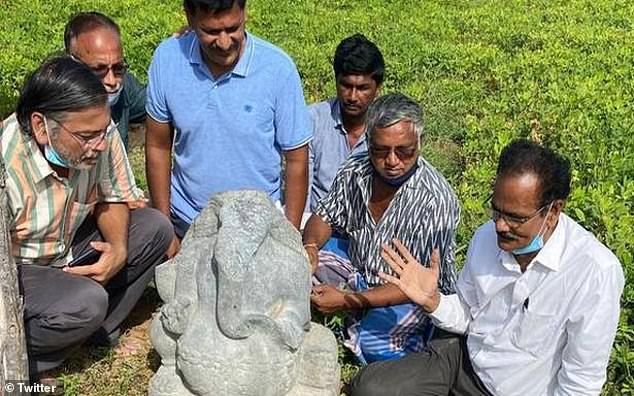 A 13 inch stone idol of Ganesh, the Hindu remover of obstacles, was discovered in Andhra Pradesh on the eve of a festival celebrating the elephant-headed god’s birth

Farmer Siripudi Venkateswaralu discovered the idol on September 9 while tilling his farm in Motupalli, a village in the Prakasam district of Andhra Pradesh, The Hindu reported.

Found on the eve of a festival devoted to Ganesh, the 800-year-old idol drew crowds of locals and visitors alike.

Running from September 10 to 19 this year, Ganesh Chaturthi is celebrated with fasting, offerings, and prayers.

Later, modaka is distributed and public feasts and martial arts exhibitions are held. 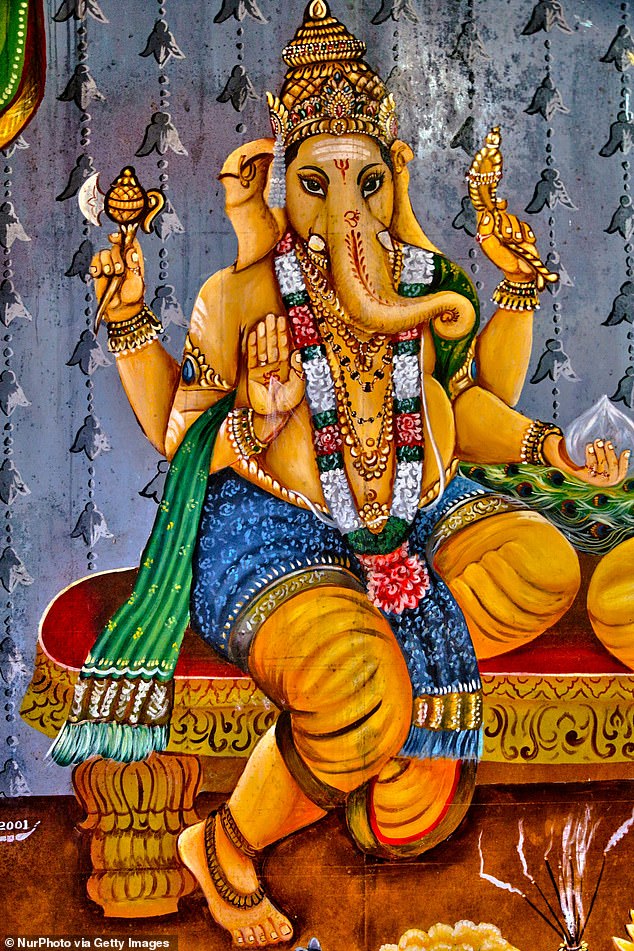 Ganesh is typically presented with four arms, with an ax in his upper right hand, a noose in his upper left hand and sweet dumplings in the lower left. His broken tusk is often shown his lower right though sometimes the hand is extended out to the viewer in a posture of enlightenment.

On the tenth day, idols of Ganesh are carried in a public procession and immersed in a nearby river or sea.

The statue found in Motupall is 42 inches long, 30 inches wide and 18 inches tall, and is missing Ganesh’s typical mukut, or crown, according to archaeologist E. Sivanagi Reddy.

Reddy dated the icon to the 12th century, when Andhra Pradesh was ruled by the Chola dynasty, based on its style and inscriptions in the ruins of nearby Kodanda Ramaswamy temple.

The Chola dynasty was a Tamil empire that governed southern India until the 13th century. 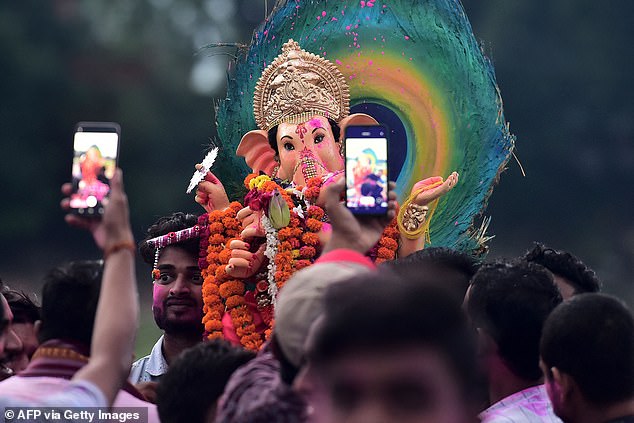 Running from September 10 to 19, Ganesh Chaturthi celebrates Ganesh’s birth with fasting and prayers, followed by  feasts, martial arts exhibitions, and a public procession 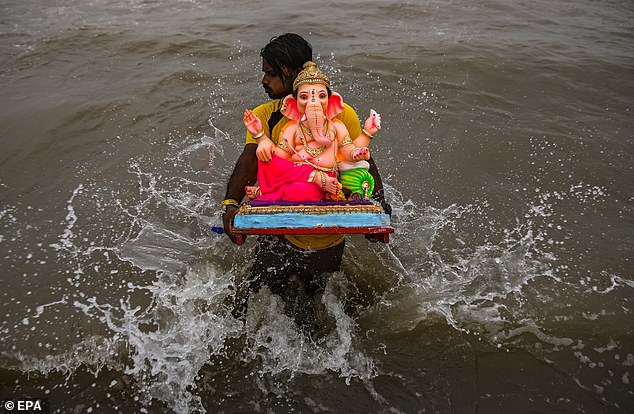 On the tenth day of Ganesh Chaturthi, idols of the elephant-headed deity are immersed in a nearby river or sea

I​​n Hindu iconography, Ganesh is usually depicted with an elephant head and a stout human body with four arms.

Each appendage carries an item with ritual significance: An ax in his upper right hand, and his broken tusk, or ‘danta,’ in his lower right. (In one story, Ganesh’s tusk was broken by an ax thrown by a warrior seeking to attack his father, Shiva.)

A noose is in his upper left hand and sweets are in the lower left.

The idol was taken to the temple by the Motupalli Heritage Society, though its final disposition is unknown. 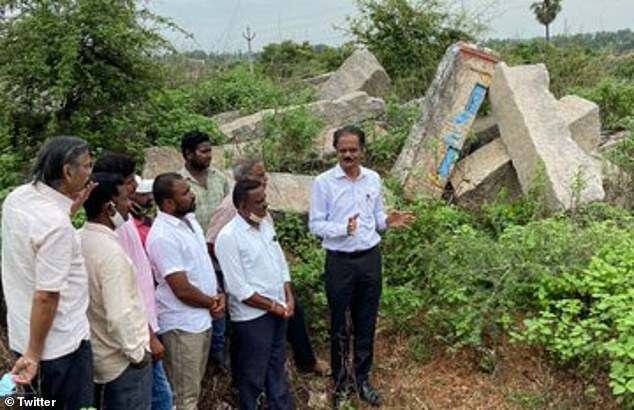 In August, archaeologist E. Sivanagi Reddy (center) found a 14th century Tamil inscription in Kodanda Ramaswamy temple, near where the idol was discovered

In August Reddy was part of a team of archaeologists who found a Tamil inscription in the temple dedicated to Prataparudra, emperor of the Kakatiya dynasty that supplanted the Chola.

The inscription dated to the early 14t century and registers the land as a gift ‘for the merit of the king,’ The Deccan Chronicle reported.

Prataparudra was the last Kakatiya ruler: He died during a 1323 invasion that saw the kingdom annexed to the Islamic Delhi Sultanate.