Your PALM could soon be your concert ticket! Amazon launches its Amazon One hand-recognition technology in music venues

Your palm could soon be your ticket into a concert, thanks to Amazon.

The tech giant has announced it is bringing its palm-recognition technology, called Amazon One, to music venues as a replacement for physical tickets and apps.

The Red Rocks Amphitheatre in Denver will be the first concert venue to trial the technology, but it will be available at other venues in the coming months, Amazon said.

Concertgoers at Red Rocks can sign up to connect their palm to a ticketing account at Amazon One ‘enrollment stations’ outside the venue by hovering their hand over a device.

They only need to sign up once and then can use their palm to get into other shows and events at the venue. An Amazon account is not needed to use it.

However, Amazon One has already sparked privacy concerns over the use of biometric data, such as face or palm scans, because of the risk of it being stolen by hackers.

Only last month, three US senators wrote a letter to Amazon to express concern about its expansion of the high-tech palm print recognition system. 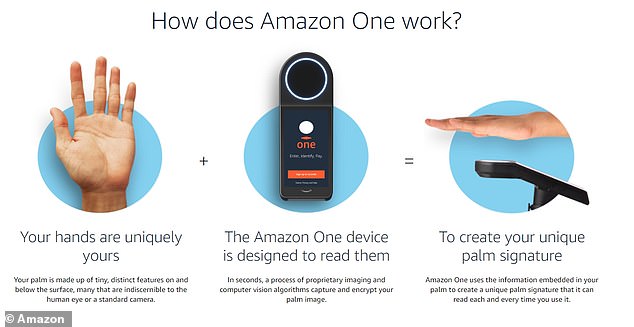 Amazon One palm-reading devices (pictured) – already rolled out at Amazon Go grocery stores in the US – are now stationed outside the Red Rocks Amphitheatre in Denver, Colorado 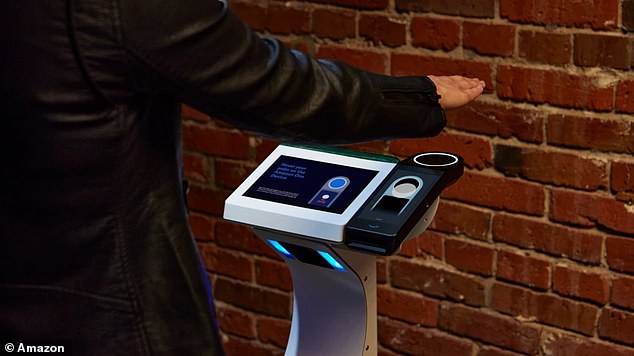 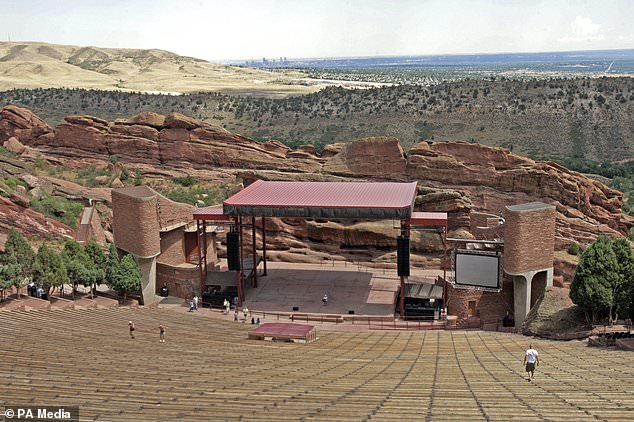 The Red Rocks venue outside Denver, Colorado (pictured) has hosted artists including REM, Incubus, Coldplay and U2

AMAZON ONE AT CONCERT VENUES: HOW IT WORKS

When people buy tickets for concerts on the AXS website, they’re given an AXS Mobile ID, which can be accessed on the AXS App.

This AXS Mobile ID, which takes the form of a digital barcode, can be used at Amazon One ‘enrollment stations’ to register their palm.

People just need to scan their AXS Mobile ID and wave their palm to complete the enrollment.

Enrollment takes less than a minute, and guests will have the option to enroll with just one palm or both.

They’re now enrolled, and can wave their palm to get into the venue.

The process could mean that initially concert goers are queuing up to complete their enrollment at the enrollment stations outside the venue.

However, over time, when more and more venues partner with Amazon One and more people have registered their palms, the time taken to get into venues will be greatly reduced.

Amazon One, revealed this time last year, is comprised of a scanner that creates a unique ‘palm signature’ when customers wave their hand in front of it.

The technology has so far been used in Amazon’s physical brick-and-mortar stores in the US, called Amazon Go, where shoppers can pay for groceries and snacks by just swiping their palms.

Now, Amazon has signed a deal with entertainment company AEG to bring the technology to Red Rocks, which sells tickets on AEG’s ticketing site, AXS.

The partnership marks the first time Amazon One is being used outside the company’s physical stores.

Bryan Perez, CEO of AXS, said other venues plan to add the technology in the coming months but he declined to say where or how many.

AEG partners with more than 350 stadiums and theatres around the world, including the O2 Arena in East London (the former Millennium Dome), so it’s likely British music lovers will be scanning their palm for admission very soon.

Concertgoers can get to their seats faster with their palm than holding up their phone to an attendant to scan a bar code, Perez said. Those who want to scan their palms will have a separate lane to enter.

‘You don’t have to fumble around with your phone,’ said Perez. ‘Your hand is always attached to your body.’

Dilip Kumar, vice president for physical retail and technology at Amazon, described the technology in a blog post.

‘As we approach the first anniversary of the launch of Amazon One later this month, I’m excited to share that it’s now available as an option to enter Denver, Colorado’s Red Rocks Amphitheatre,’ he said.

‘We’re excited about the potential for expansion to other locations where entry lines can be long and time consuming.’

To assuage privacy concerns, Amazon said it keeps the palm images in a secure part of its cloud and does not store the information on the Amazon One palm-scanner device.

Users can also ask for their information to be deleted at any time, according to the tech giant.

Last year, when Amazon One was revealed, Kumar said the company had chosen palm recognition over facial because it is more secure. 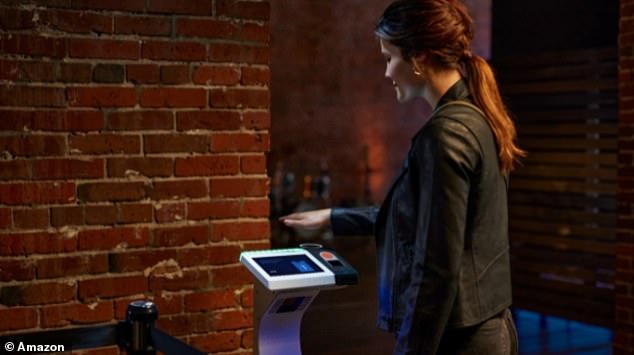 Would you give your palm readings to Amazon? Privacy experts have warned against companies using biometric data, such as face or palm scans, because of the risk of it being hacked and stolen 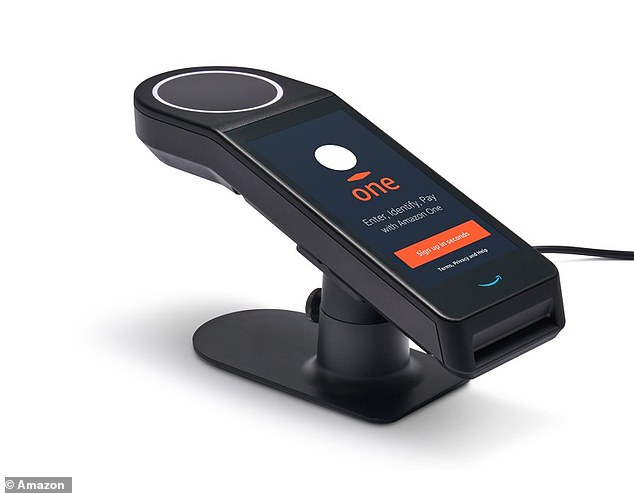 ‘One reason was that palm recognition is considered more private than some biometric alternatives because you can’t determine a person’s identity by looking at an image of their palm,’ he said.

‘It also requires someone to make an intentional gesture by holding their palm over the device to use.

‘And it’s contactless, which we think customers will appreciate, especially in current times. Ultimately, using a palm as a biometric identifier puts customers in control of when and where they use the service.’

Last month, three US senators – Democrats Amy Klobuchar and Jon Ossoff and Republican Bill Cassidy – wrote Amazon a letter expressing their concerns about Amazon One, which began rolling out at Whole Foods stores around Seattle in April.

‘Our concerns about user privacy are heightened by evidence that Amazon shared voice data with third-party contractors and allegations that Amazon has violated biometric privacy laws,’ the lawmakers wrote in the letter, as quoted by Reuters.

‘We are also concerned that Amazon may use data from Amazon One, including data from third-party customers that may purchase and use Amazon One devices, to further cement its competitive power and suppress competition across various markets.’

HOW TO USE AMAZON ONE AT AMAZON GO GROCERY STORES

In Amazon Go stores, customers can insert their debit card into Amazon One devices that are located at the entrance.

They then just need to flash their hand at the device’s reader to link their payment details with their palm and complete their registration.

Once they brought all their purchases to the till, they just need to wave their hand across the scanner once more to pay.

Customers do not have to have an Amazon account to start using Amazon One at the stores – they just need a mobile phone number and a payment card.