Most people with diabetes need at least two shots of insulin per day, but to to ease this burden, scientists are working on an implantable robot to administer the medication.

A team of Italian researchers recently published a study in the journal Science Robotics that outlines a two-component system called PILLSID, which includes an implantable insulin pump that sits in the abdomen area and ingestible magnetic hormone capsules to refill it.

When patients need to reload the pump, they swallow a capsule, which is then pulled through the digestive system by magnets inside the insulin device.

The device, roughly the size of a flip phone, catches the capsule with a tractable needle, rotates it into a certain position and then extracts the hormone.

The capsule continues to move naturally through the digestive track and eventually leaves the body.

Arianna Menciassi, an author of the paper and a professor of biomedical robotics and bioengineering at Sant’Anna School of Advanced Studies in Pisa, Italy, told IEEE Spectrum that the process is similar to a cargo rocket launching into space and docking on the International Space Station.

‘Maybe it’s scary to think about a docking station inside the body, but it worked,’ she said.

The device, about the size of a flip phone, catches the capsule with a tractable needle, rotates it into a certain position and then extracts the hormone – the capsule continues to move naturally through the digestive track and eventually leaves the body

PILLSID has shown to be successful in pigs, having been tested on three diabetic pigs.

Researchers have yet to study the innovation in human trials.

In future human trials, researchers plan to implant the device along the abdomen wall connected to the small intestines, allowing insulin to be delivered specifically to this region.

The insulin pump includes ‘magnetic switchable components, miniaturized mechatronic elements, a wireless powering system, and a control unit to implement the refilling and control the infusion processes,’ Menciassi and colleagues wrote in the study. 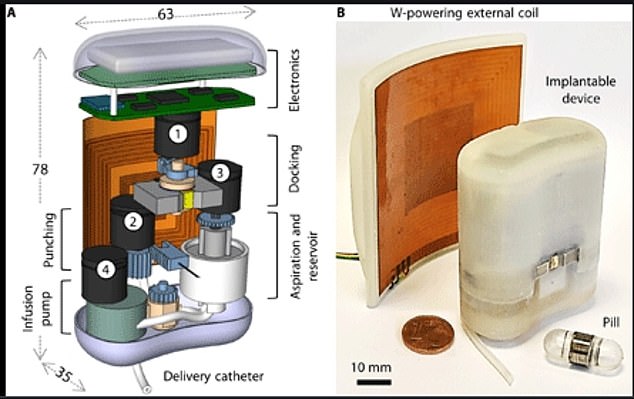 ‘The device weights 165 grams and is 78 millimeters by 63 millimeters by 35 millimeters, comparable with commercial implantable devices yet overcoming the urgent critical issues related to reservoir refilling and powering.’

The researchers believe PILLSID would ideally be used in patient’s with type 1 diabetes, as they have to inject themselves with insulin numerous times each day.

Although the innovation has just been unveiled, there are robotic-like devices that deliver medication with a push of a button.

However, these models sit on the outside of the body and use a tube or needle to deliver insulin.

On the other hand, there are also implantable devices, but as IEEE Spectrum explains, these require a tube protruding from the body in order to be refilled.

The research has been tested on three diabetic pigs, with results showing the insulin pump is capable of controlling blood glucose levels for several hours

A fully implantable system refilled by a pill would eliminate the need for protruding tubes and hardware, said Menciassi.

Menciassi and her colleagues note that PILLSID could have other uses, such as delivering chemotherapy to people with ovarian, pancreatic, gastric and colorectal cancers.

More than 34 million Americans have diabetes and around 90% of all adults have Type 2.

Reducing the risk of Type 2 diabetes can be achieved through healthy eating, regular exercise and achieving a healthy body weight.