A team of scientists from Tel-Aviv University have created the deadliest type of brain tumor in a lab by 3D-printing it from human glioblastoma tissues, allowing doctors to test different procedures and treatments in order to eradicate the brain tumor.

‘If we take a sample from a patient’s tissue, together with its extracellular matrix, we can 3D-bioprint from this sample 100 tiny tumors and test many different drugs in various combinations to discover the optimal treatment for this specific tumor,’ lead study author and Tel Aviv University neuroscientist Ronit Satchi-Fainaro, said in statement.

‘Alternately, we can test numerous compounds on a 3D-bioprinted tumor and decide which is most promising for further development and investment as a potential drug.’ 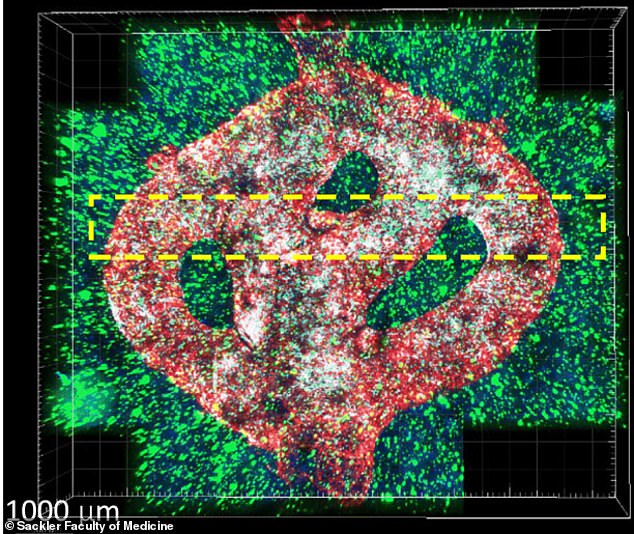 Glioblastoma is an aggressive type of cancer that develops in the brain, along with the spine, and is almost always fatal.

The average survival rate is 12 to 18 months and only 25 percent of patients live more than a year, but only five percent have surpassed five years.

It is estimated that more than 10,000 Americans succumb to glioblastoma every year.

The current treatments include surgery, coupled with daily doses of radiation and oral chemotherapy. 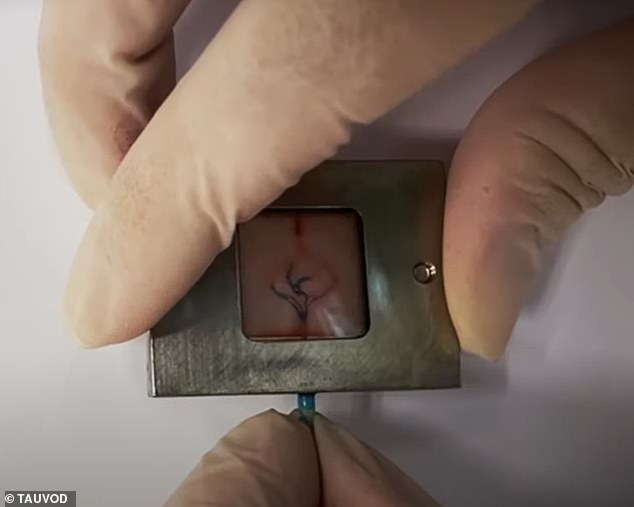 The 3D-bioprinted tumor includes blood vessel-like tubes where blood cells and drugs can flow, allowing doctors to test different procedures and treatments in order to eradicate the brain tumor

Each model is printed in special bioreactor designed the Tel-Aviv University team, who use samples taken from patients in the operating rooms to create each model

While conducting previous studies into the deadly tumor, the team identified a protein called P-Slectin that was produced when the cancer cells interreacted with cells in the brain’s immune system, or brain malignancies.

‘We found that this protein is responsible for a failure in the microglia, causing them to support rather than attack the deadly cancer cells, helping the cancer spread,’ Satchi-Fainaro said.

‘However, we identified the protein in tumors removed during surgery, but not in glioblastoma cells grown on 2D plastic petri dishes in our lab.

‘The reason is that cancer, like all tissues, behaves very differently on a plastic surface than it does in the human body.

‘Approximately 90% of all experimental drugs fail at the clinical stage because the success achieved in the lab is not reproduced in patients.’

This led to the development of the first 3D-bioprinted model of glioblastoma tumor.

Each model is printed in special bioreactor designed the Tel-Aviv University team, who use samples taken from patients in the operating rooms to create each model. 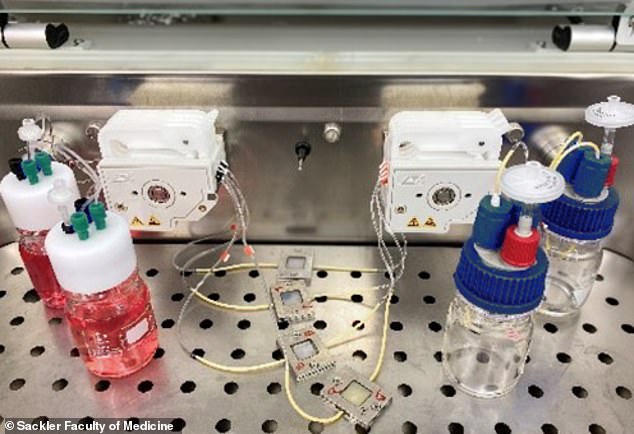 Pictured are the components that are used to create the 3D-printed tumors, including blood vessels (left) and tissue samples from human patients (right) 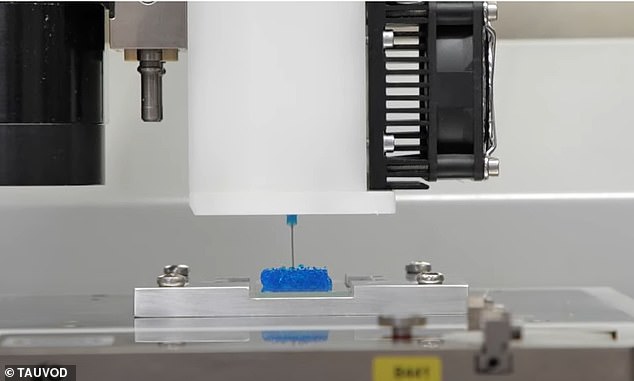 ‘First, we tested a substance that inhibited the protein we had recently discovered, P-Selectin, in glioblastoma cell cultures grown on 2D petri dishes, and found no difference in cell division and migration between the treated cells and the control cells which received no treatment,’ Satchi-Fainaro said.

‘This experiment showed us why potentially effective drugs rarely reach the clinic simply because they fail tests in 2D models, and vice versa: why drugs considered a phenomenal success in the lab, ultimately fail in clinical trials.’

By using human tissue, along with its extracellular matrix, the team can 3D-bioprint 100 tiny tumors and test a range of  treatments ‘in various combinations to discover the optimal treatment for this specific tumor,’ Satchi-Fainaro said.

WHAT IS A GLIOBLASTOMA AND JUST HOW DEADLY IS IT? THE AGGRESSIVE BRAIN TUMOR SUFFERED BY JOHN MCCAIN

Senator John McCain was diagnosed with a glioblastoma in July 2017

Glioblastoma is considered the most aggressive tumor that can form in the brain. Senator John McCain was diagnosed with one in July 2017.

Patients have a 10 percent chance of surviving five years after their diagnosis, according to figures. The average lifespan is between 14 and 16 months.

Three adults per every 100,000 will be struck down with a glioblastoma, says The American Association of Neurological Surgeons (AANS).

It is most commonly found in men aged 50 to 60, and there is no link between developing glioblastoma and having a previous history with other cancers.

WHAT IS THE TUMOR MADE OF?

The tumor is made up of a mass of cells growing quickly in the brain, and in most cases patients have no family history of the disease.

It won’t spread to other organs, however, once it is diagnosed, it is nearly impossible to target, surgeons claim.

Unlike other types of brain cancer which are more specifically located, glioblastoma can occur in any part of the brain.

WHAT TREATMENT IS AVAILABLE?

Because the tumor likely already spread deep into the brain by the time it is diagnosed, the cancerous tissue is incredibly difficult to remove.

Surgeon will only ever remove the tumor, or part of the tumor, if it won’t do any damage to the surrounding brain tissue.

Dr Babcar Cisse, a neurosurgeon at the Weill Cornell Brain and Spine Center, told Daily Mail Online in July 2017: ‘By the time a glioblastoma is diagnosed, microfibers can spread to the rest of the brain which an MRI would not spot.

‘So even if the main tumor is removed and the patient receives radiation and chemotherapy, it will come back.’

Brain tumors are graded from between one to four, depending on how fast they grow and how aggressive they are.

Malignant tumors are either given a high-grade three or four, while benign ones are given a lower grade one or two.

Glioblastoma is often referred to as a grade four astrocytoma – another form of brain tumor, says the AANS.

Patients typically complain of symptoms such as confused vision, trouble with memory, dizziness and headaches.

The symptoms are somewhat nonspecific, and vary from person to person, and may not persist.

The disease is therefore impossible to diagnose based on symptoms alone.