People living in dense UK cities are LONELIER, with retirees and men in urban areas up to 23.5 per cent more likely to report loneliness, study finds

People who live in dense UK cities are lonelier than those in more rural locations, a study has revealed, finding retirees and men are up to 23.5 per cent more likely to be lonely.

Data from 400,000 people in 22 British cities held by the UK Biobank allowed the team from the University of Hong Kong to link loneliness to population density.

They compared survey responses on loneliness to living conditions, including how close participants lived to green spaces and busy roads.

Their analysis revealed that for every 1,000 extra homes within half a mile of a home, participants had a 2.8 per cent greater risk of being lonely and 11.4 per cent increased chance of social isolation.

After controlling for factors such as age, health and social status, the team found that the effects of isolation and loneliness were seen more in men and retirees.

They didn’t explore the cause of increased loneliness from higher density housing, but suggest it may be due to a lack of privacy and control increasing stress. 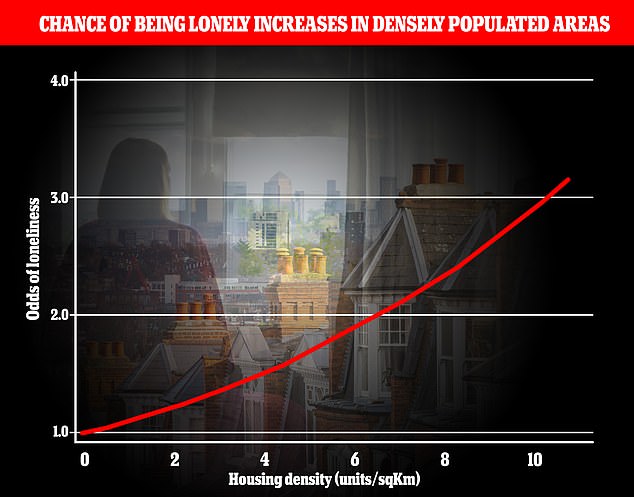 People that live in dense UK cities are lonelier than those in more rural locations, a study revealed, finding retirees and men are 23.5 per cent more likely to be lonely 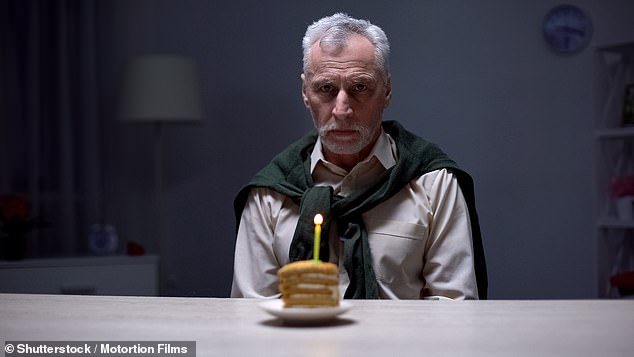 The team didn’t explore the cause of increased loneliness from higher density housing, but suggest it may be due to a lack of privacy and control increasing stress (stock image)

People over the age of 65 living in areas with more homes such as a large city were 17.4 per cent more likely to say they were struggling with loneliness.

‘Loneliness is not only still prevalent in 21st-century cities, but is so endemic that we can detect a regular pattern and measure it,’ said study author Chris Webster.

Researchers explored the population density within a 0.6 and 1.2 mile residential street network within the homes of study participants.

They also explored other built environment factors such as how walkable the areas were, how regular public transport was and traffic levels on the nearest road.

The team then looked at other physical environment factors such as green space exposure within the catchment area for each of the thousands of participants.

Their analysis revealed that those in high density detached housing were less likely to experience loneliness and social isolation than those in large apartment blocks.

The researchers suggest this could be due to a lack of privacy and control, resulting in greater levels of social stress.

Based on the findings, the researchers claim there is need for urban design and density planning to be considered when tackling loneliness and social isolation.

‘Housing is the basic building block of a city, and the way they are packed may be one of the keys to creating healthy and resilient cities of the future,’ said Chinmoy Sarkar from the study team.

The findings have been published in the journal Landscape and Urban Planning.

RESEARCH SUGGESTS THAT IT IS POSSIBLE TO DIE OF LONELINESS

Research suggests it is possible to ‘die of loneliness’.

A major study published March 2018 suggested social isolation can increase the chance of a stroke by 39 per cent and premature death by 50 per cent.

Loneliness may raise the risk of a heart attack by more than 40 per cent, researchers found.

The analysis was based on the health records of 480,000 Britons – making it the largest study of its kind.

Those who already had cardiovascular problems were far more likely to die early if they were isolated, suggesting the importance of family and friends in aiding recovery.

The research team, which included British academics, said lonely people had a higher rates of chronic diseases and smoking and showed more symptoms of depression.