Why you should NEVER message an ex: Keeping former partners on the ‘back burner’ causes negative feelings — even if you don’t jump back into bed with them, study finds

Keeping your exes on the ‘back burner’ leads to negative feelings all around — even if you don’t actually jump back into bed with them — a study has warned.

Experts led from the University of Oklahoma surveyed nearly 400 adults in long-term relationships to find that more than half were keeping someone else ‘in spare’.

However, doing so led to bad feelings about both the other person and themselves, especially when the flirt is supposedly in an exclusive relationship. 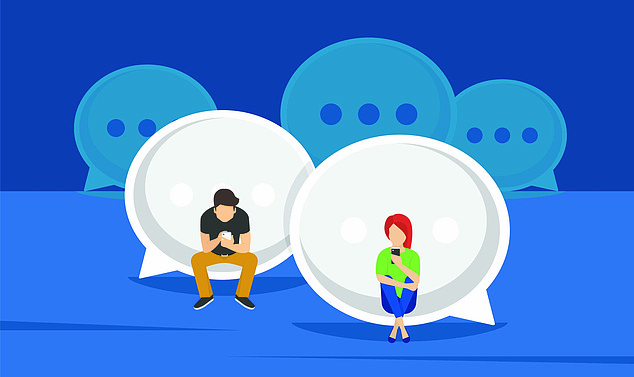 According to the team, some two-thirds of participants reported keeping in touch with their exes.

A separate study found that 54 per cent of women have engaged in sex with an ex, compared to just 44 per cent of the men.

Of those who had sex with their ex-partners, the lion’s share said that they did it because being with an old flame was comforting.

However, 14 per cent of those surveyed admitted that they had sex with the ex in the hope of reconciling.

The study was conducted by interpersonal communication expert John Banas of the University of Oklahoma and his colleagues.

‘If having ex-partner back burners cascades into increased communication, increased sexual activity, and bad feelings for the admirer,’ began Dr Banas.

Then, he continued, ‘those in committed relationships might wish to exercise greater caution before forming a back-burner relationship with an ex-partner.’

In their study, the researchers surveyed 397 adults in committed romantic relationships with an average length of seven years.

The team found that the majority of subjects — 62 per cent — admitted to keeping someone on the proverbial back burner.

And of those keeping someone — or multiple people — in their back pocket, half said that they were stringing along one or more exes.

‘As we see society re-opening, there appears to be a surge in the use of dating apps during what has been dubbed “The Summer of Love”,’ said psychologist Brenda Wiederhold of California’s Interactive Media Institute, who was not part of the study.

This, she continued, makes it ‘ever more important to study new trends in connecting for friendship and romance.’

The full findings of the study were published in the journal Cyberpsychology, Behavior, and Social Networking.

WHAT TACTICS DO PEOPLE USE TO STOP THEMSELVES CHEATING?

Researchers at the University of New Brunswick asked 362 heterosexual adults how they had staved off temptations to cheat while in a relationship.

Seventy-five per cent of the study’s respondents, who were aged between 19 and 63, selected ‘relationship enhancement’ as their primary tactic.

This ploy included things like taking their partner on a date, making an extra effort with their appearance around them, or having more sex with them.

The second most-popular was ‘proactive avoidance’, which involved maintaining distance from the temptation.

As well as physically avoiding the temptation, people also avoided getting close in conversation with that person.

3. ‘Derogation of the temptation’

The third and final tactic used by people was ‘derogation of the temptation’, which involved feelings of guilt, and thinking about the tempting person in a negative light.

Participants reported flirting less when they applied the final, ‘derogation of the temptation’ strategy.

But none of the strategies had an effect on the levels of romantic infidelity, sexual infidelity, and whether the relationship survived.

Psychologist Dr Alex Fradera, who was not involved in the research, said the findings show little can be done once feelings of temptation have crept in.