International Space Station is thrown out of control as jet thrusters on the newly arrived Russian ‘Nauka’ module misfire, starting a ‘tug of war’ between the two modules

The International Space Station (ISS) averted a disaster on Thursday after a newly arrived Russian module suffered a concerning mishap.

In a worrying episode for NASA, the ISS was thrown out of control when jet thrusters of the 22-ton Nauka research module inadvertently fired a few hours after it docked.

Nauka, which is designed to serve as a research lab, storage unit and airlock, docked at the ISS on Thursday at 9:29am EDT (2:29pm BST).

But following the docking, the flight control team noticed the ‘unplanned firing’ of its thrusters about three hours later, NASA announced.

This caused the ISS to move out of attitude – its orientation in relation to its direction of travel – by 45 degrees, which is about one-eighth of a complete circle.

The station’s position is key for getting power from its solar panels. If this was lost, the ISS would ‘decay’, meaning it would get closer and closer to Earth before it came crashing down.

Russian state-owned news agency RIA cited NASA specialists at the Johnson Space Center in Houston, Texas, as describing the struggle to regain control of the ISS as a ‘tug of war’ between the two modules.

The seven crew members aboard – two Russian cosmonauts, three NASA astronauts, a Japanese astronaut and a European space agency astronaut from France – were never in any immediate danger, according to NASA. 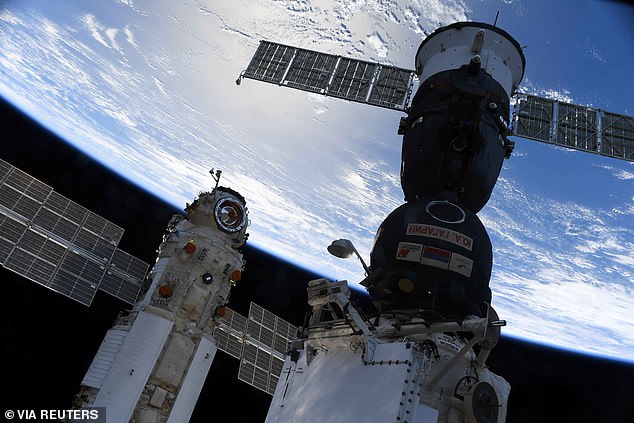 Nauka (left) is seen docked to the International Space Station (ISS) next to Soyuz MS-18 spacecraft on July 29, 2021 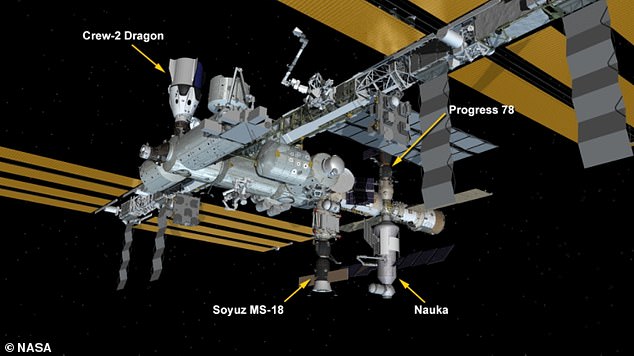 The Nauka module is designed to serve as a research lab, storage unit and airlock that will upgrade Russia’s capabilities aboard the ISS.

Nauka will be a new science facility, docking port and spacewalk airlock for future operations, along with providing additional crew quarters, a galley and a toilet.

Nauka, which means ‘science’ in Russian’ launched on July 21 atop a Russian Proton rocket.

It docked with the ISS on July 29 – but for some reason, it mistakenly fired its thrusters and caused the ISS to move out of orientation.

‘The crew was never and is not in any danger, and flight controllers in Mission Control Houston are monitoring the status of the space station,’ NASA said in a statement.

‘Ground teams have regained attitude control and the motion of the space station is stable.’

What caused the malfunction of the thrusters on the Nauka module, which was delivered by the Russian space agency Roscosmos, has yet to be determined, NASA officials said.

The malfunction has forced NASA to postpone its planned launch of Boeing’s new CST-100 Starliner capsule on a highly anticipated uncrewed test flight to ISS until at least August 3.

The Starliner, which will transport up to seven passengers to and from low-Earth orbit, had been set to blast off atop an Atlas V rocket on Friday (July 30) from the Kennedy Space Center in Florida.

NASA had reported Nauka’s successful docking on Thursday before announcing the incident that followed.

The mishap began about three hours after it latched onto the ISS, as mission controllers in Moscow were performing some post-docking ‘reconfiguration’ procedures, according to NASA.

The module’s jets inexplicably restarted, causing the entire station to pitch out of its normal flight position some 250 miles above the Earth, leading the mission’s flight director to declare a ‘spacecraft emergency’, US space agency officials said.

An unexpected drift in the station’s orientation was first detected by automated ground sensors, followed 15 minutes later by a ‘loss of attitude control’ that lasted a little over 45 minutes, according to Joel Montalbano, manager of NASA’s space station program.

Flight teams on the ground managed to restore the space station’s orientation by activating thrusters on another module of the orbiting platform, NASA officials said. 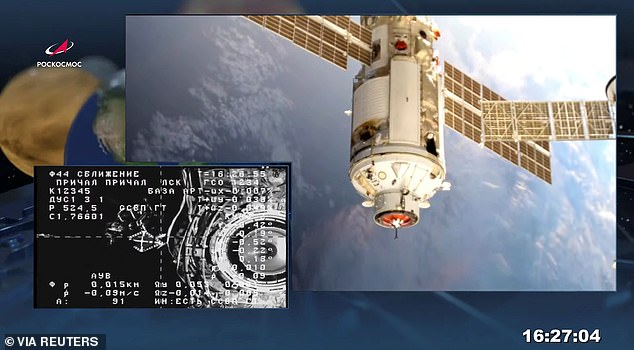 Nauka, which means ‘science’ in Russian’, launched on July 21 atop a Russian Proton rocket

At the height of the incident, the station was pitching out of alignment at the rate of about a half a degree per second, Montalbano said during a NASA conference call with reporters.

The Nauka engines were ultimately switched off, the space station was stabilised and its orientation was restored to where it had begun, NASA said.

Communication with the crew was lost for several minutes twice during the disruption, but ‘there was no immediate danger at any time to the crew, who ‘really didn’t feel any movement’, Montalbano said.

Had the situation become dangerous enough to require evacuation, the crew could have escaped in a SpaceX crew capsule still parked at the outpost and designed to serve as a ‘lifeboat’ if needed, said Steve Stich at NASA’s commercial crew program. 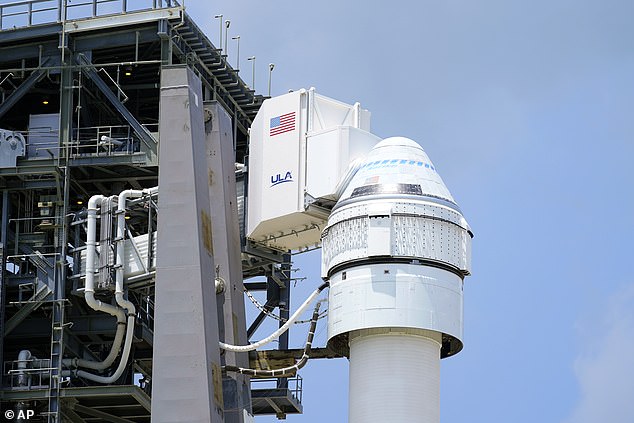 Boeing’s CST-100 Starliner spacecraft sits atop a United Launch Alliance Atlas V rocket, on Space Launch Complex 41 at the Cape Canaveral Space Force Station ready for the second un-piloted test flight to the International Space Station, Thursday, July 29, 2021. The launch was scheduled for Friday afternoon but has been delayed until August 3 at the earliest

Montalbano said there was no immediate sign of any damage to the space station. The flight correction maneuvers used up more propellant reserves than desired, ‘but nothing I would worry about,’ he said.

After its launch last week from Kazakhstan’s Baikonur Cosmodrome, the module experienced a series of glitches that raised concern about whether the docking procedure would go smoothly.

‘The process of transferring the Nauka module from flight mode to “docked with ISS” mode is underway.’ Roscosmos was cited by TASS as saying.

‘Work is being carried out on the remaining fuel in the module.’

The International Space Station (ISS) is a $100 billion (£80 billion) science and engineering laboratory that orbits 250 miles (400 km) above Earth.

It has been permanently staffed by rotating crews of astronauts and cosmonauts since November 2000.

Research conducted aboard the ISS often requires one or more of the unusual conditions present in low Earth orbit, such as low-gravity or oxygen.

The US space agency, Nasa, spends about $3 billion (£2.4 billion) a year on the space station program, a level of funding that is endorsed by the Trump administration and Congress.

A U.S. House of Representatives committee that oversees Nasa has begun looking at whether to extend the program beyond 2024.

Alternatively the money could be used to speed up planned human space initiatives to the moon and Mars.