Phone died? Not a problem! WhatsApp will now let you send messages from a computer without your smartphone connected

WhatsApp is introducing a feature that lets users send messages from a computer without needing to have their smartphone connected.

The messaging platform already has an app for PC, but until now users have needed their phones on and connected to be able to send messages and make calls.

With this new feature, WhatsApp users will be able to send messages on PC (either Mac or Windows) even if their phone is disconnected or switched off.

WhatsApp users will also be able to enjoy video and audio chats on WhatsApp for PC without their phone.

Up to four other non-phone companion devices – like PCs and tablets – will be able to connect to WhatsApp independently of a smartphone, as part of the change.

WhatsApp is testing the feature with ‘a small group of users’ as part of a beta test before ‘slowly rolling it out more broadly’, the firm said. 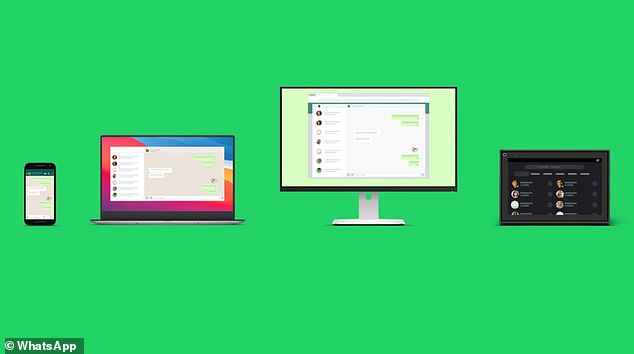 Staring with a small group of users, WhatsApp for PC (Mac or Windows) will send messages even when your smartphone is switched off.

Up until now, users needed to have their phone on and connected to send messages on WhatsApp for PC.

It will work on up to four ‘non-phone’ companion devices simultaneously (in addition to your phone if it’s on and connected).

The feature is being trailed through WhatsApp’s beta programme before being rolled out to all users gradually.

‘Very excited to be launching a beta of our new multi-device capability for WhatsApp,’ said Will Cathcart, head of WhatsApp, which is owned by Facebook.

‘Now you can use our desktop or web experiences even when your phone isn’t active and connected to the internet.’

WhatsApp is predominantly known for its mobile app, even though it initially launched for PCs back in 2015.

In March this year, WhatsApp rolled out one-to-one voice and video calls for the desktop version of its chat platform on Windows PCs and Apple Macs.

WhatsApp began rolling out voice calls for its mobile app in 2015 and video calls the following year. March’s update brought both of these features to WhatsApp for desktop.

Currently, you can download WhatsApp for your Mac or Windows computer by visiting www.whatsapp.com/download.

Once it’s downloaded, you can connect it to your WhatsApp account by pointing your phone’s camera at a QR code that appears on the PC screen.

Once that’s done, you can start sending messages from the desktop app – but to do this, your phone has to be switched on and connected to the internet.

So, if you’re happily sending messages on your PC and your phone dies, gets switched off or disconnects from the internet, you can’t send messages on PC anymore. 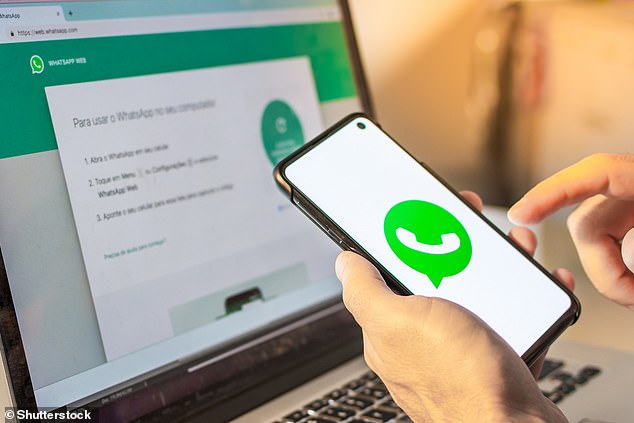 Previosuly, you had to have your phone switched on and connected to send messages on WhatsApp for PC

The cryptographic keys needed to access the service are automatically provided only to the two people in each conversation.

In decrypted form, messages are accessible by a third party – which makes them interceptable by governments for law enforcement reasons.

Facebook-owned WhatsApp is already encrypted, and now Mark Zuckerberg is looking to do the same with Facebook Messenger and Instagram Direct.

A warning message appears on the PC app saying: ‘Phone not connected. Make sure your phone has an active internet connection.’

With the new change, it won’t matter if your phone is off or disconnected – you’ll still be able to send chats on WhatsApp for PC.

And you’ll be able to do this on up to four ‘non-phone’ companion devices simultaneously (in addition to your phone if it’s on and connected).

The platform has detailed the change in a Facebook Engineering blog post, and how it affects end-to-end encryption.

It will work ‘while still maintaining the same level of privacy and security’, it added, in a reference to the privacy standard.

WhatsApp, which was bought by Facebook in 2014 for about $19 billion, says every private message sent using WhatsApp is secured with end-to-end encryption by default.

It acts like ‘an unbreakable digital lock’ that keeps the contents of messages secure and viewable to no-one except the sender and the recipient.

The cryptographic keys needed to access the service are automatically provided only to the two people in each conversation, through their phone.

That meant each smartphone acted as ‘the source of truth’ and was the only device capable of end-to-end encrypting messages for another user.

It also meant that WhatsApp for PC merely acted as ‘mirror’ of what was being dictated by the phone (even though users were typing the actual messages using their PC).

But with multi-device functionality, each device linked to a WhatsApp account – including PC and tablets – now has its own identity key, so they’re no longer relying on the phone for end-to-end encryption. 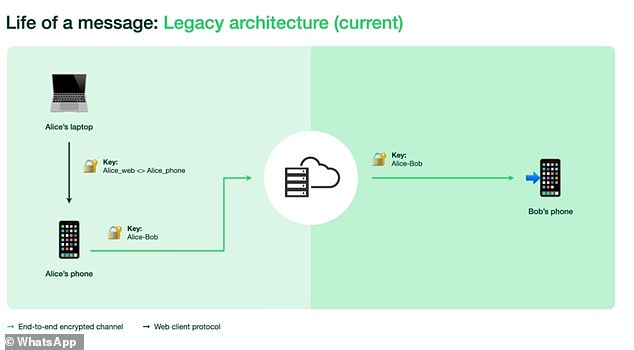 Prior to the introduction of multi-device functionality, all WhatsApp users were identified by a single identity key from which all encrypted communication keys were derived 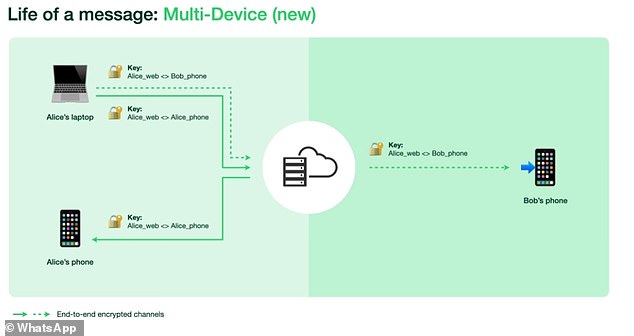 But with multi-device, each device linked to a WhatsApp account – including PC and tablets – now has its own identity key

‘We have developed new technologies to maintain end-to-end encryption while still managing to sync your data – such as contact names, chat archives, starred messages, and more – across devices,’ WhatsApp says it the post.

‘To achieve this, we had to rethink WhatsApp’s architecture and design new systems to enable a standalone multi-device experience while preserving privacy and end-to-end encryption.’

End-to-end encryption is much touted by WhatsApp as a leading security standard for online messaging that it would never get rid of.

This may be partly due to opponents from child protection charities, who have said end-to-end encryption makes it harder for authorities to detect paedophiles who message children on WhatsApp.

In spring 2019, Mark Zuckerberg announced plans to introduce end-to-end encryption to Facebook and its other platforms (apart from WhatsApp, which already has it).

In a blog post, Zuckerberg called the feature ‘an important tool in developing a privacy-focused social network’.

‘Encryption is decentralizing – it limits services like ours from seeing the content flowing through them and makes it much harder for anyone else to access your information,’ he said.

Two years later, however, there is no sign of the change being implemented.

The last word was from Jon Millican, Facebook’s software engineer for Messenger privacy, in January 2020.

‘I’ll be honest right now and say we’re still in a place of having more questions than answers,’ Millican said.

‘While we have made progress in the planning, it turns out that adding end-to-end encryption to an existing system is incredibly challenging and involves fundamentally rethinking almost everything.’

A Facebook spokesperson told MailOnline that the company hasn’t ‘shared a timetable’ for a rollout but described is as a ‘long-term project’.