A coronavirus outbreak struck East Asia some 20,000 years ago — and left traces of the epidemic in the genetic makeup of people from that area, a study has found.

An international team of researchers led from the University of Queensland analysed the genes in human DNA that code for proteins that interact with coronaviruses.

They found evidence among the DNA people of East Asian ancestry of natural selection for adaptations that would have served to lessen disease severity.

COVID-19 — which has killed some 3.8 million people over the course of the last 18 months — is not the only severe outbreak of coronavirus that jumped from animals.

In 2002, Severe Acute Respiratory Syndrome resulting from SARS-CoV emerged in China and led to more than 800 mortalities.

Meanwhile, MERS-CoV — which leads to Middle East Respiratory Syndrome — killed more than 850 people after it was first reported in Saudi Arabia in 2012. 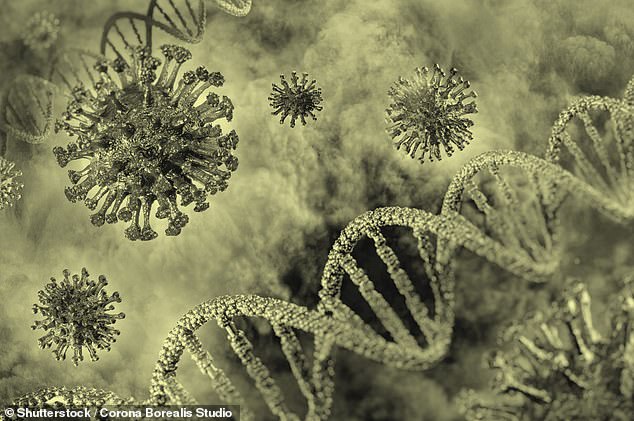 A coronavirus outbreak struck East Asia some 20,000 years ago — and left traces of the epidemic in the genetic makeup of people from that area, a study has found

Analysing these evolutionary footprints, he explained, is analogous to how ‘studying the rings of a tree gives us insight into the conditions it experienced as it grew.’

In their study, the team used data from the 1000 Genomes Project — the largest public database of common human genetic variations — with a specific focus on the changes in those genes that code for proteins that interact with SARS-CoV-2.

Next — outside of living cells — the team synthesised both human and SARS-CoV-2 proteins, showing that both interacted directly, illustrating the conserved nature of the mechanism that coronaviruses use for cell invasion.

This, he continued, revealed ‘evidence that the ancestors of East Asian people experienced an epidemic of a coronavirus-induced disease similar to COVID-19.’

‘In the course of the epidemic, selection favoured variants of pathogenesis-related human genes with adaptive changes presumably leading to a less severe disease,” Professor Alexandrov explained.

‘By developing greater insights into the ancient viral foes, we gain understanding of how genomes of different human populations adapted to the viruses that have been recently recognised as a significant driver of human evolution.’

‘Another important offshoot of this research is the ability to identify viruses that have caused epidemic in the distant past and may do so in the future.’

‘This, in principle, enables us to compile a list of potentially dangerous viruses and then develop diagnostics, vaccines and drugs for the event of their return.’

ZOONOTIC DISEASES: THESE ARE VIRUSES USUALLY STARTED IN WILD ANIMALS THAT CAN PASS TO OTHER SPECIES AND SURVIVE

Zoonotic diseases are able to pass from one species to another.

The infecting agent – called a pathogen – in these diseases is able to cross the species border and still survive.

They range in potency, and are often less dangerous in one species than they are in another.

In order to be successful they rely on long and direct contact with different animals.

Common examples are the strains of influenza that have adapted to survive in humans from various different host animals.

H5N1, H7N9 and H5N6 are all strains of avian influenza which originated in birds and infected humans.

These cases are rare but outbreaks do occur when a person has prolonged, direct exposure with infected animals.

The flu strain is also incapable of passing from human to human once a person is infected.

A 2009 outbreak of swine flu – H1N1 – was considered a pandemic and governments spent millions developing ‘tamiflu’ to stop the spread of the disease.

Influenza is zoonotic because, as a virus, it can rapidly evolve and change its shape and structure.

There are examples of other zoonotic diseases, such as chlamydia.

Chlamydia is a bacteria that has many different strains in the general family.

This has been known to happen with some specific strains, Chlamydia abortus for example.

This specific bacteria can cause abortion in small ruminants, and if transmitted to a human can result in abortions, premature births and life-threatening illnesses in pregnant women.